In Food Security in India introduction, you will get to know that food security does not only mean that your food needs to be secured from contamination. In India, a food security system takes care of the availability, accessibility, and affordability of the food so that people from different financial status have no problem in buying food in India. Food Security in India depends on government vigilance and the public distribution system. When the security of food is threatened, the PDS comes to rescue and sort things out.

You will be studying what food security is. Also, food security officials have to deal with the availability of the food to be given to every person living in India. The administration also takes reasonable care to find out about the extra barriers that the locals are trying to put on the food distribution. 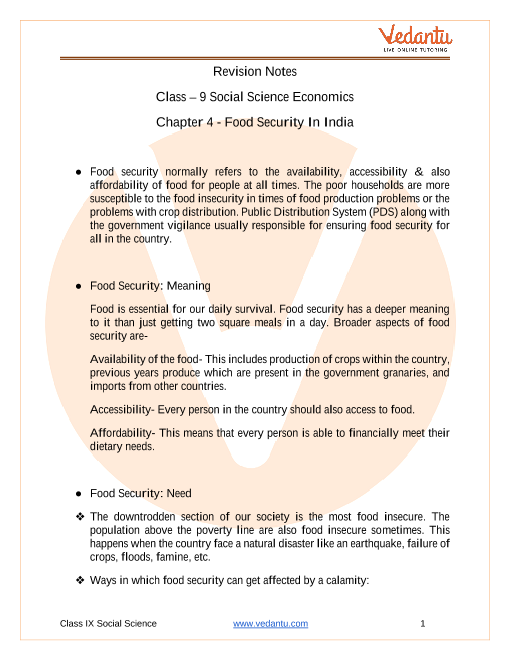 Importance of Food Security in India

A lot of students will be thinking, why does food need security? Well, there are so many answers to this one question. But we will keep things simple. During a calamity such as a drought, the farms are unable to produce crops that can be yielded and sent to the food market. As a result, there is a shortage of food. The prices started to go up, and people are now starving. Massive starvation can lead to famine, which means thousands of people die from starvation. That’s why food needs to have security, which is given by the government.

The Food Security in India Class 9 Important Notes will help you revise all the important points you need to have before you start writing answers in your exam. From the Class 9 Economics Food Security Notes, you will get to know about food insecurity. This term is quite important as India is one of the hardest-hit countries in terms of food insecurities. Food insecurity means food is not being delivered to people. Thus they suffer from malnutrition and other diseases related to a deficiency of nutrients and carbohydrates.

The problem of food insecurity in India has more to do with the differences in the social community. The people from backward classes have small lands which are poor in terms of fertilizers and natural nutrients. Thus, the crops which they grow on the ground are mostly inedible and, if consumed, could be dangerous.

India has its system to fight the food shortage during the drought months. This system is called buffer stock, where people stock up food grains such as wheat and rice. India's government stores these stocks with the help of its Food Corporation of India division. These stocks are purchased by the farmers who have surplus production. The farmers get to receive money on the pre-decided price, known as the Minimum Support Price (MSP). This is the minimum price which the government has to pay the farmers in return for their yield. This food can then be used by the government during calamities such as floods, droughts, landslides, etc.

Food is one of the essential parts of our lives; without food, no human being or even animal will survive. In addition to this, food is the only thing that can provide us with all the necessary nutrients and carbohydrates that our body needs to function correctly. The Food Security in India Class 9 Notes by Vedantu details how the food industry has changed over the period and how food security plays a vital role in keeping up with the hygiene of the people living in India. This chapter states all the necessary things you need to know about India's food security and some of the facts that might amaze you.

Q1. Why is it Essential to have Hygienic Food?

Ans. In case you are eating food that is not safe to eat, you are getting yourself in the risk of allowing harmful bacteria inside your body. In addition to this, these bacteria can make you sick, and in the worst case, you need to be hospitalized. Every year thousands of people suffer stomach pain due to eating bad food that is not suitable. You need to make sure that you are eating fresh food. Moreover, food poisoning can cause people to suffer from dehydration and other diseases like gastroenteritis.

If you are not getting hygienic food, you won’t be getting the required calories that your body needs to function correctly. As a result, you will feel fatigued and loss of breath in a short time, which will cause a loss of stamina.

Q2. What is the Difference Between Best Before the Date and Use Before Date?

Ans. If you think about it, seeing your food getting wasted is one of the most painful things in the world. The food which you prepared all by yourself when becomes noticeable is when you feel the importance of keeping food clean and cooking it freshly. Your best before dates and use before dates are two completely different things. If you have food that comes with a use before date, you need to use it before that particular date, or it won’t be edible.

On the other hand, best before dates are usually your guidelines, which tells you that the food product will remain in the best condition possible by this particular date. You can eat that food even after the date has gone, but you might not be getting all the nutritional values written on the packaging of the food product. A high-risk food such as meat comes with use before date, and bread comes with the best before date on the packaging.