The Class 6th History Chapter 6 notes are very much useful for the exam and learning about different aspects of History. This Social Science Chapter 6 consists of Buddhism, Upanishads, Jainism and others. Learning about them will help you to understand how these religions work and their importance.  To make it more interesting, we also bring you new questions and ideas for Class 6th notes that will make the concept clear.

The Class 6th History Chapter 6 notes shows kings like Mahajanapadas grew more powerful with new cities being developed and village life being changed. During this period, there was a change in people’s thinking process. These people were working to find the true meaning of life. Over history, the world, especially India has seen divine saints who changed the world. Buddha and Mahavir are the two most powerful people who attained enlightenment and spread the meaning of true life. 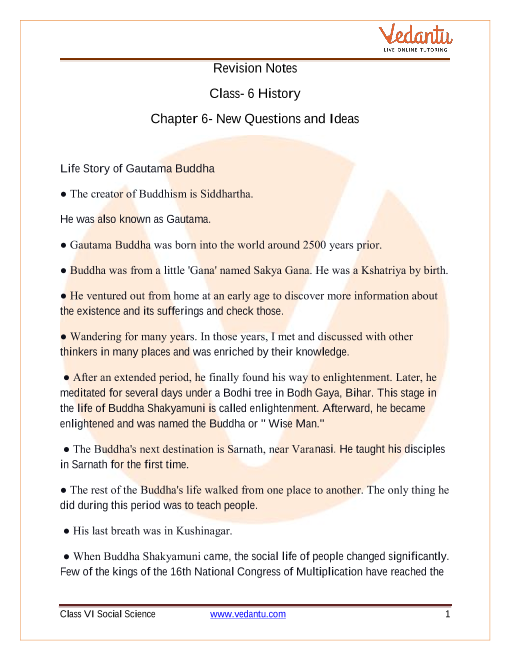 Excerpts from the Buddha's Teachings:

The Origin of Buddhism

Siddhartha, who is popularly known as Gautama Buddha, was born 2500 years ago and was the founder of Buddhism. He belonged to a small sect known as “Sakya Gana'' and was a “Kshatriya.” As he grew up to the age of young adulthood, he left all the comforts that belonged to him and started his journey in search of knowledge. His journey of enlightenment began when he started meditating under the Pipal Tree at Bodh Gaya. He later started teaching people in Sarnath which is near to Varanasi. He used to travel barefoot to teach people about life until he ended his journey at Kusinara where he breathed his last.

His teachings- He taught that life is filled with suffering and unhappiness. He also mentioned that no matter how much we get from life, we will be unsatisfied which is the “Tanha” that means “thirst.” To remove the constant thirst, he taught people to moderate the amount of thirst they possess. He asked people to focus on being kind, respecting the lives of others, even animals. He explained that if we do good we will get good in return and vice versa which is commonly referred to as “karma”.

The “Upanishads” were the conversations between teachers and students. The teachers were dominated by Men especially Brahmins and Rajas. Women participated in various debates among whom “Gargi” is famous. The famous thinker “Sankaracharya” developed the Upanishads with his leads in the later time.

A Brief View of Jainism

Vardhamana Mahavira was the last 24th “Tirthankara” of the Jain religion. Even he was a “Kshatriya” prince just like “Buddha.” Mahavira was a prince of Lichchhavis, a group that belonged to the Vajji Sangha sect. When Mahavira turned 30, he left his home and lived in the forest for 12 years after which he attained enlightenment.

He taught that those men and women who wished to know the truth of life should leave their homes and must follow the rules of “Ahimsa” which means non-violence and not to hurt living beings.

People who left their homes belonged to "Sangha." Vinaya Patika consists of rules written by Buddha. Men and women belonging to Sanghas group begged for food and were called "Bhikkus."

In the rainy season, people cannot travel to preach due to the problem with shelter. Both Buddha and Mahavira had a team of followers with them that included both men and women who would build temporary shelters in the gardens or caves in hilly areas. The permanent shelters were called “Monasteries” or “Viharas.” The viharas were made up of wood and brick. Buddhism over time spread all over the world.

The continuation will be done in the 9th chapter of History.

Students who are keen on learning Class 6 History Chapter 6 notes can download the PDF and PPT format. This allows students to learn easily and get a proper understanding. We have made the process of downloading easy on our site.

1. Who was the last Trithanakar of Jainism?

Lord Mahavir was the 24th and last Tirthankara of Jainism. As the vedics, Mahavira's predecessor, Parshvanatha lived for 250 years.

2. Which family does Lord Buddha belong to?

He was a Kshatriya and belonged to the sect “Sakhya Gana.”

3. Who taught “Ahimsa” and what does it mean?

Lord Mahavira taught “Ahimsa” and he asked his disciples to forbid him from causing harm or killing of living beings.