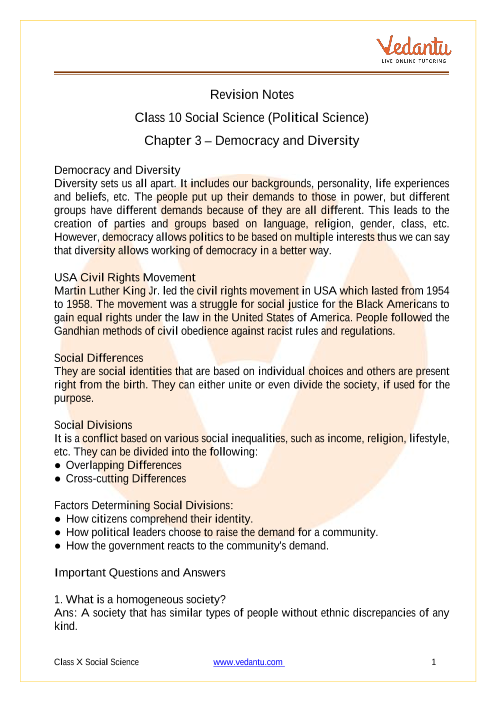 Diversity sets us all apart. It includes our backgrounds, personality, life experiences and beliefs, etc. The people put up their demands to those in power, but different groups have different demands because of they are all different. This leads to the creation of parties and groups based on language, religion, gender, class, etc. However, democracy allows politics to be based on multiple interests thus we can say that diversity allows working of democracy in a better way.

Martin Luther King Jr. led the civil rights movement in USA which lasted from 1954 to 1958. The movement was a struggle for social justice for the Black Americans to gain equal rights under the law in the United States of America. People followed the Gandhian methods of civil obedience against racist rules and regulations.

They are social identities that are based on individual choices and others are present right from the birth. They can either unite or even divide the society, if used for the purpose.

It is a conflict based on various social inequalities, such as income, religion, lifestyle, etc. They can be divided into the following:

1. What is a homogeneous society?

Ans: A society that has similar types of people without ethnic discrepancies of any kind.

Ans: Anyone who moves from one country or region to another for work, studies, etc.

3. What is the black power movement?

Ans: It is a movement that started in 1966 and went on until 1975. It movement advocated the use of violence under necessary conditions to end racism in the USA. Its goal was total racial equality.

4. What do you mean by accident of birth?

Ans: It is the origin of social difference based on the birth.

Ans: It is the origin of social difference based on the choices people make.

6. How can a social difference lead to a social division? Give an example.

Ans: If the social differences cross each another, it becomes difficult to avoid conflicts between the groups.

This leads to the creation of a ridge known as a social division.

7. What actions were taken against the three Olympians, Smith, Carlos, and Norman by the International Olympic Association?

Ans: Smith and Carlos were suspended from the US team in the Olympics. Norman Peter was not selected for the upcoming Olympic games.

The Story of Two Athletes

During the 1968 Olympics when two athletes named Tommie Smith and John Carlos, were called for the medal distribution ceremony, both the athletes wore black gloves on the one hand and raised the hand, making it a fist. They did this while the US National Anthem was played. The two athletes did this on purpose to protest against the social discrimination that was going on in the US. They were trying to attract the attention of all the people of the world towards the social discrimination in the United States. The Black gloves and the closed fist symbolized the power of black people or Black Power.

What is Social Division?

Social difference simply means that one group of people are given more attention or preference than the other. Social discrimination or differences can be of two types: Overlapping Differences and Cross-cutting Differences.

Overlapping Differences: Overlapping differences create a situation of tension and deep divisions in society. In this type of difference, one category of division becomes more important or essential than other kinds of division. People start feeling a sense of detachment from the community they belong to. They start to think that they belong to another community.

Cross-Cutting Differences:  This is another type of social difference. In cross-cutting difference, it so happens that a group that shares a common interest in a topic or an issue can be on a different side in case there is another issue.

Politics is something that should be done on democratic terms. There should not be any discrimination in politics or political parties. There should be equality in politics. If political parties start to compete based on some social differences, it can lead to a devastating situation. The combination of politics and the social difference can prove to be very dangerous and disastrous for a nation.

1. What are the factors that affect the politics of social difference?

The three significant factors that determine the outcome of a social difference in politics are:

2. How are the Democracy and Diversity Class 10 Notes helpful?

The Notes of Civics Class 10 Chapter 3 Democracy and Diversity prepared by Vedantu’s experts help the students to understand the actual meaning of democracy and social discriminations. The notes help the students in getting a complete overview of the chapter. These notes come with worked out exercises and other essential questions. A student can access these notes free of cost and will guide you throughout the learning process. These notes are prepared by expert teachers who ensure that they are error-free and of top quality.