With the rapid development of the country, our need, wants, and demands for the production of services, goods, and movement over space take an increase. Today, the world has turned over into a large production factory with the help of an efficient and fast-moving transport system. Today, India is well-linked with the rest of the world through its stable economy and well-connected transport.

Through the Lifelines of National Economy Class 10 Notes, students will comprehend how the modern means of transport and communication serve as lifelines of our nation and its modern economy. 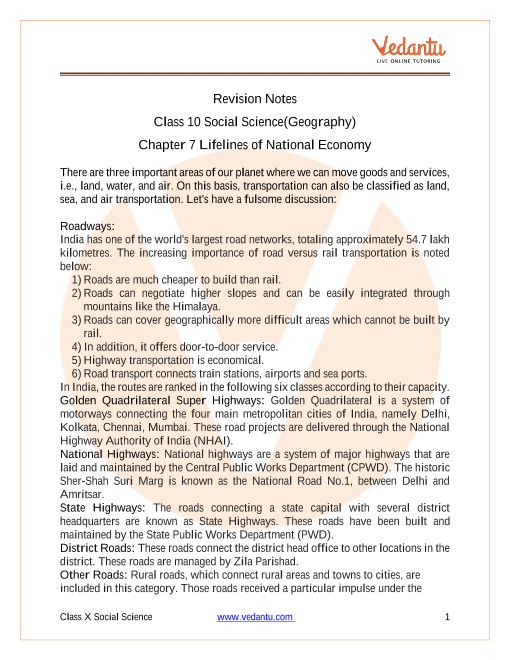 There are three important areas of our planet where we can move goods and services, i.e., land, water, and air. On this basis, transportation can also be classified as land, sea, and air transportation. Let's have a fulsome discussion:

India has one of the world's largest road networks, totaling approximately 54.7 lakh kilometres. The increasing importance of road versus rail transportation is noted below:

In India, the routes are ranked in the following six classes according to their capacity.

National Highways: National highways are a system of major highways that are laid and maintained by the Central Public Works Department (CPWD). The historic Sher-Shah Suri Marg is known as the National Road No.1, between Delhi and Amritsar.

State Highways: The roads connecting a state capital with several district headquarters are known as State Highways. These roads have been built and maintained by the State Public Works Department (PWD).

Other Roads: Rural roads, which connect rural areas and towns to cities, are included in this category. Those roads received a particular impulse under the Pradhan Mantri Grameen Sadak Yojana.

Border Roads: Border Roads Organization builds and maintains roads in neighboring parts of the country. This organization was created in 1960 to develop strategically important highways in the northern and northeastern border regions.

Highways can also be categorized according to the type of materials used in their construction, such as:

Railways are the primary means of transport for transporting large loads and bulky goods over long and short distances in India. Railways have increased in importance in the Indian economy. However, railway transportation also suffers from a number of problems, which are mentioned below:

We have three major pipeline systems across this country.

Waterways are the least expensive method of transportation. They are more suitable for transporting large and heavy goods. It is a mode of transportation that is energy efficient and environmentally friendly.

The National Waterways in India are:

The internal waterways in India are Mandavi, Zuari and Cumberjua, Sunderbans, Barak and Kerala backwaters through which transport takes place.

Trade between India and foreign countries takes place through ports. There are 2 major and 200 notified non-majors (minor/intermediate) ports in India.

The following is a list of the most important ports in India:

Air travel is the quickest, most comfortable and most prestigious mode of transportation. Air transportation has facilitated access to land areas such as high mountains, bleak deserts, dense forests and long oceans. The air transport was nationalised in 1953. Air India is a provider of domestic and international air services.Pawanhans Helicopters Ltd. provides helicopter services to Oil and Natural Gas Corporation for its offshore activities in inaccessible areas and difficult terrain. But air travel is not something that ordinary people can do.

Since the appearance of humans on Earth, they use different methods of communication. But, the rhythm of change, was rapid in the modern era. Long-range communication is much easier without the physical motion of the communicator or receiver.Individual and mass communication, including television, radio, press, cinema, etc. are the primary means of communication within the country. India has the largest postal service in the world. It is responsible for parcels and personal written communications. Cards and envelopes are considered to be first-class mail and are carried by air between land and air stations. Second-class mail consists of book packages, recorded journals and periodicals. They are transported by land and marine transportation.

Trade in goods between persons, states and countries is called trade. Trade between one country and another is called international trade. It is regarded as the national economic barometer. Exports and imports are the building blocks of trade. A country's trade balance is the difference between their exports and imports.

Tourism as a Trade :

Over 15 million people contribute directly to the tourism industry. Tourism in India:

The Lifelines of National Economy Class 10 chapter deals with how the modern means of communication and transport serve as lifelines of our nation and students will get a brief understanding of the dense and efficient network of the transport system as a prerequisite for local, national, and global trade.

The movement of services and goods occurs through three important domains on the Earth-Water, Land, and Air. Thus, based on these domains, the transport system can be classified into- the land medium, water medium, and the air medium of transport.

India has the largest road networks in the whole world that sum to about 54.7 lakh kilometre. The road is an essential economic means that also provides door-to-door service.

Road transport is an essential means that links between the air, seaports, and railway station mediums.

State Highways are roads that link the state capital with other multiple district headquarters that are constructed and marinated frequently by the PWD- State Public Works Department.

District roads connect the district headquarters with other parts within the districts and are frequently maintained by the Zila Parishad.

Border Roads Organisation was established in the year 1960 and since, maintains and constructs different roads in the borderline areas of the country. The main goal of the Border Roads is the development of roads that are of strategic importance in the north-eastern and northern and border areas.

The dominant mode of transportation in India for carrying bulky goods and huge loads for short and long distances is the Railway system. Railways have become the essential transport chain in India's economy. Railway lines are difficult to lay on sandy plains.

Pipelines are networks that make use of pipes, usually underground pipes to distribute and transport fluids such as water, fertiliser factories, crude oil, thermal power plants, petroleum products, and natural gas. However, pipelines can even be used to transport solids when converted into a slurry.

Waterways are the most affordable means of transport and are best suited for carrying bulky and heavy goods. Waterways are an environmentally-friendly and fuel-efficient mode of transport. The five major important National Waterways in India are- N.W. No.1 between Allahabad and Haldia, N.W. No.2 between Sadiya and Dhubri, N.W. No.3 in Kerala, N.W. No.4 along with Kakinada Puducherry, and N.W. No.5 along the East Coast Canal.

Seaports are the hub spot where the majority of India's trade with foreign countries is carried out. India comprises about 200 notified non-majors, also known as immediate or minor ports and two major ports. A few crucial ports in India are- Kochchi, Haldia, Kandla, Marmagao, and Paradwip port.

Airways are the most comfortable, prestigious, and fastest mode of transport in India. Air transport was nationalised throughout India in the year 1953 to provide domestic and international air services. Air travel has made people gain access more manageable to the terrain areas such as dreary deserts, long oceans, high mountains, and dense forests.

The Pawan Hans Helicopters Ltd. provides air travel services to the Natural Gas and Oil Corporation. This means of transport helps the off-shore operations and provides service to rugged terrains and inaccessible areas. However, air service is not within reach of the common people.

Q1. What are International Trade and its Importance in the Lifelines of National Economy Notes ?

Q2. What Role Does Communication Play in the Lifelines of National Economy?

Ans: India is one of the largest telecom networks in Asia and the standard Subscriber Trunk Dialling (STD) facilities set up all over Indian have made the integration of the development in space technology with communication technology possible. Three essential features of communication play an essential role as a Lifeline Of Indian Economy.

Mass Communication creates awareness and provides environment among people about multiple national policies and programmes such as newspapers, radio, books, television, and films. India publishes a considerable number of newspapers across the country in about 100 dialects and languages.

Akashwani or the Indian Radio Channel broadcasts multiple programmes in the local, regional, and national languages.