All the current types of money and their connections with the banking system are discussed vividly in Chapter 3 Money and Credit Class 10 Notes by Vedantu. In another portion of the chapter Money and Credit, the term ‘credit’ is discussed elaborately along with the impact of credit to the borrowers at various situations. Other relevant topics in this regard are also made a part of Class 10 Ch 3 Money and Credit Notes PDF which has been compiled by experts and can be downloaded for free which will definitely help the Class 10 CBSE students in the exam. 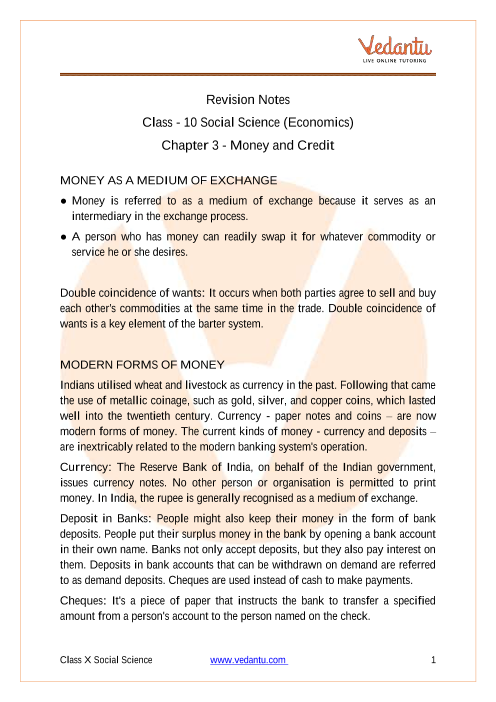 Money as a Medium of Exchange

If you go through the Class 10 Economics Chapter 3 Notes, you will find that money is termed as the medium of exchange for it operates as an intermediate in the exchange procedure.  A person can easily exchange money for any goods or services.

The Modern Form of Money

If you download the Money And Credit Class 10 Notes PDF you will come to know that grains and cattle were used as a mode of exchange by the Indians in the early ages. After that period, various metallic coins such as gold, silver, copper came into existence as the medium of exchange. In the present day, the modern form of money is circulated as currency-paper notes and coins. The present forms of money are directly related to the present banking system.

The currency notes are issued by the Reserve Bank of India on behalf of the Central Government. No other agencies are permitted to issue currency. The most used currency in India is Rupee.

You will find another form of money in the notes of Economics Class 10 Chapter 3 which is called deposits in banks. The extra cash can be deposited in the banks by opening an account in the banks. Those deposits are accepted by the banks by paying an extra amount as interest. The deposits can be withdrawn as per demand and these are termed as demand deposits. The payment of demand deposits is made with a cheque. The piece of paper indicating the bank to pay a certain quantum from the account of the person to the person in whose name the cheque has been issued is called a cheque.

Loan activity is one of the most significant topics in the Ch 3 Economics Class 10. In the present day scenario, almost 15% of the deposits are held by the banks as cash. This amount is kept in view of paying the individuals who come to withdraw money from the bank on a certain day. A greater part of the deposits is used to extend loans. Loans are required for different economic activities. A greater rate of interest is charged by the banks on loans. The basic source of revenue of the bank accounts to the difference between the amounts charged from borrowers and the actual payment to the depositors.

Class 10 Economics Chapter 3 describes the meaning of the term credit. An agreement in which the lender gives money, commodities or services to the borrower in return for the guarantee of future payment is termed as credit.

If you study the Money and Credit Class 10 Notes thoroughly, you will come to know about the terms of credit. There exists an interest rate of each loan agreement. The borrower should pay to the lender along with the repayment of the principal amount in that particular interest rate. The collateral (security) is also demanded by the lenders.

In Money and Credit Class 10 notes, terms of credit refer to the interest rate, collateral and documentation needed and the mode of payback. If you go through the Class 10 Economics Chapter 3 Notes you will find that the terms of credit may alter according to the nature of the lender and the borrower.

Ch 3 Economics Class 10 will tell you that the development of a country depends upon the affordability and availability of credit. The different types of loans are as follows:

1. What is Formal and Informal Credit in Class 10 Economics Chapter 3?

Ans. If you study the notes of Economics Class 10 Chapter 3 minutely you will get the idea of formal and informal credit. The formal sector contributes merely half of the aggregate credit required for the rural people. The rest of the credit comes from the informal sector. The most significant thing is that there is an equal distribution of the formal credits for the benefit of poor people. The prima facie prerogative of the banks must be to reduce the dependence on informal sectors.

2. What are the Self-Help Groups for?

Ans. There is much dependence on informal sources of credit because of the following reasons:

Due to these specific problems, self-help groups (SHG) are created by the people of rural India. Small groups of poor people which encourage small savings among the members are termed as SHG. Generally, an SHG consists of 15-20 members.