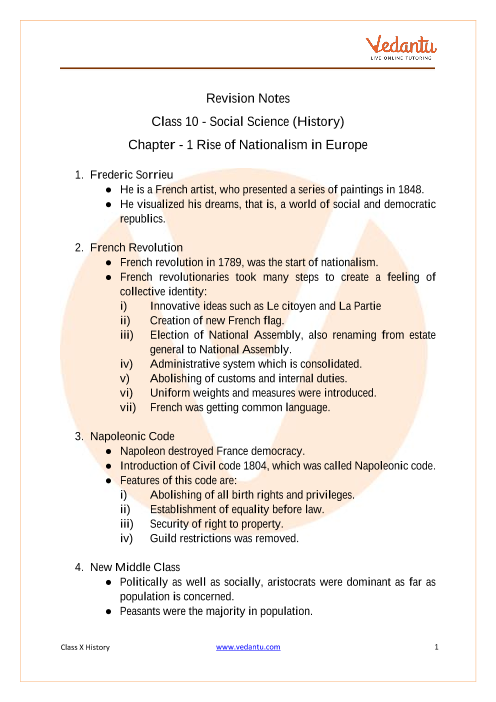 A New Conservatism After 1815

1. What was the aim of the French Revolution?

Ans: Following was the aim of French Revolution:

2. Who was the ‘Hero of two Worlds’ and what was his role in the unification of Italy?

Ans: Giuseppe Garibaldi was the ‘Hero of two Worlds’. He was born in 1807 and played important role in the unification of Italy. Two secret societies were formed: Young Italy in Marseilles and Young Europe in Berne. According to his belief, Italy wouldn’t have survived as smaller states and it needed to be unified.

3. Write about the two female allegories in the 19th century.

Ans: The two female allegories in the 19th century are:

4. Name some of the characteristic features of conservative regimes.

5. Explain the importance of National feeling and Imagination.

Ans: The culture was important for the development of national feelings. It was through arts, poetry, music, stories which created nationalist feelings. Glorification of science was criticized openly and it was replaced by intuitions, sentiments and emotions. This was known as romanticism aimed to create national sentiments. Language also played important role in developing national feelings.

The Rise of Nationalism in Europe - Free PDF

The Class 10 Social Science Chapter 1 in History is available for free in PDF. For class notes in detail and further chapter solutions, we have a dedicated section for the students of boards. The chapter Frédéric Sorrieu’s visualisation of his dream and it ends with the spread of imperialism. Refer to Class 10 History Chapter 1 notes to get an in-depth understanding of the chapter.

The Rise of Nationalism in Europe

The notes of Chapter 1 History Class 10 starts with the dream Sorrieu had of a world made up of democratic and social republics. His idea of nationalism excludes class-based divisions and he divides the people marching in the scene by their nations. Men and women marching together with flags of their nation can be seen depicting a nationalist feeling.

The French Revolution and the Idea of the Nation

The Making of Nationalism in Europe

Europe was divided into various dutchies and empires instead of countries like present day. The idea of nation-states was non-existent then.

The Aristocracy and the New Middle Class

What did Liberal Nationalism Stand for?

A New Conservatism After 1815

Liberal-nationalist started to be associated with various revolutions in many European regions. The primary belong to the educated middle-class elite. The first set of shocks was felt by the Bourbon Kings who were overthrown by liberal-nationalist. Another revolution due to nationalism was the Greek War of Independence.

The Romantic Imagination and National Feeling

The Revolution of the Liberals

The Making of Germany and Italy

Germany – Can the Army be the Architect of a Nation?

The Strange Case of Britain

Britain became a nation-state not by a Revolution or rebellion but rather by imposing its influence on its neighbouring countries. With varied identities and ethnicities, the European region was very diverse. The act of union between England and Scotland in the influence of Britain over Scotland. This is how British unification took place.

The nationalism was depicted by various personifications known as allegory. Germania and Marianne were two famous allegorical figures.

Q1. Give an Overview of The Rise of Nationalism in Europe.

Ans: Rise of nationalism in Europe was a gradual process. It was a result of mass protest, rebellion and struggle. The major conflict between the Conservatives and Liberal-nationalist issued before the former gave any concession to the latter. The idea of nationalism was formed due to the sense of belonging. People felt a bond through a common struggle fighting for their rights and freedom. Nationalism was shown through various cultural mediums like poetry, art, folk songs, dance etc.

Various nation-states emerged through various types of processes. While Prussia unified under the leadership of an army and bureaucracy, Britain unified by influencing Scotland and other neighbours. More details are given in notes of Chapter 1 History class 10.

Q2. Has the Indian Journey of Nationalism been Similar to that of European Nations?

Q3. What is nationalism according to Chapter 1 of History of Class 10?

Nationalism is the movement started in any country. The movement may be started to achieve independence. Before nationalism started in Europe, the world was not divided into different nations. The world was divided into different nations after nationalism started in Europe. You can get the solutions for Chapter 1 of History of Class 10 online. Students can understand the basic ideas of the chapter and can score high marks in social science.

Q4. What caused the rise of nationalism in Europe according to Chapter 1 of History of Class 10?

Before the nineteenth century, the different parts of Europe were governed by different empires. There was a rule of monarchy. The idea of nationalism grew due to technological and social changes. The making of new nations started in 1789 with the outbreak of the french revolution. The idea of nationalism took proper shape in more than a hundred years. It resulted in making France a democratic nation-state.

Q5. What is European nationalism according to Chapter 1 of History of Class 10?

Q6. How can I learn according to Chapter 1 of History of Class 10 faster?

Students can learn according to Chapter 1 of History of Class 10 from the online notes available at Vedantu. Social Science Notes of History For Class 10 are given in simple and easy language for a quick understanding of the topic. Students can understand the concepts by reading from the notes given on vedantu website as well as Vedantu Mobile app. They can download the history notes and learn faster for their exams. The notes and solutions are free of cost.

Class 10 Social Science History Chapter 1 Revision Notes can help students to understand the ideas and main topics given in the chapter. Students can prepare for their exams from the notes and can score high marks. All the Revision Notes for Social Science for Class 10 are given in easy language. Students can read and prepare for their exams from the notes given at Vedantu. The notes are reliable and written by professional social science teachers.