The earth’s crust is made up of several minerals which are embedded in the rocks. Metals are extracted from minerals after refining. In Chapter 5 Geography Class 10 Notes by Vedantu you will learn how human beings are dependant upon using minerals for their livelihood, festivities, decoration, daily use miscellaneous objects, religious and ceremonial rites, etc. Furthermore, you will get an idea about the classification of minerals, conservation methods, energy resources and their conservation. Class 10 Geography Chapter 5 Notes PDF which can be easily downloaded will give you an insight into the various aspects related to minerals and their study. 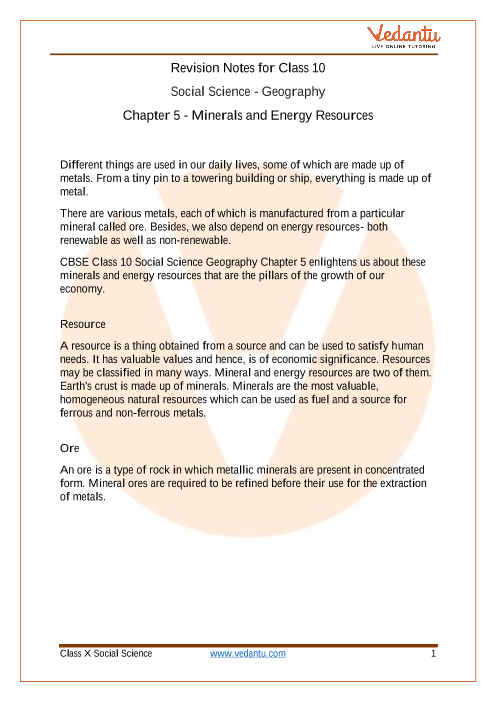 There are various metals, each of which is manufactured from a particular mineral called ore. Besides, we also depend on energy resources- both renewable as well as non-renewable.

CBSE Class 10 Social Science Geography Chapter 5 enlightens us about these minerals and energy resources that are the pillars of the growth of our economy.

A resource is a thing obtained from a source and can be used to satisfy human needs. It has valuable values and hence, is of economic significance. Resources may be classified in many ways. Mineral and energy resources are two of them. Earth's crust is made up of minerals. Minerals are the most valuable, homogeneous natural resources which can be used as fuel and a source for ferrous and non-ferrous metals.

An ore is a type of rock in which metallic minerals are present in concentrated form. Mineral ores are required to be refined before their use for the extraction of metals.

The main ore from which iron is extracted for steel manufacture. It is the backbone of modern civilization as everything - from a tiny pin to a gigantic skyscraper, bridges, railroads, etc. - is made of iron and steel. Of the four classes of iron ore –

Distribution of Iron Ore in India

When added to iron, manganese acts as a 'cleanser' in manufacturing steel to remove glasses. It is also used in the manufacture of bleaching powder, pesticides, and paint.

As copper is a ductile metal and a good conductor, it is ideal for making electric wires. It is also used in the electronics and chemical industries.

Bauxite is a rock consisting of aluminium oxides. Aluminium is an essential metallic mineral as it is light, resistant to corrosion. It combines the strength of the metals such as iron. Odisha is the leading state producing bauxite. Koraput, Sambalpur are some important districts where bauxite is mainly found.

It has thin crystal layers and is brittle. It can be easily broken into sheets. It has a low power loss factor and is resistant to high voltage; it is used in the electric and electronic industries.

State-wise Distribution of Mica in India:

An energy resource produces heat and light, is needed to cook food and run vehicles. Energy resources can be classified into two kinds, they are :

Conventional energy resources have been in everyday use on a large commercial scale for generating power. These include the non-renewable fossil resources of coal, petroleum, and natural gas on the one hand and running water on the other.

Coal is formed from the remains of plants that got buried in deep layers of the earth's surface over a million years.

i. Peat (the first stage)

Importance and uses of coal

● It is an essential source of power in India.

● Besides providing heat and raising steam in industrial sectors, it is still an essential domestic fuel.

● The primary source of Gondwana coal is in Damodar Valley.

● Jharia, Bokaro, and Giridih in Jharkhand are some essential coalfields.

It is formed from the dead plants and animals buried in rocky strata on the ocean floor. It has the broadest range of domestic as well as industrial use and so it is called liquid gold.

● About 60-63% of the country's total production is from Bombay High.

● About 18-19% of the output is from Gujarat. Ankleshwar is the essential oil mining field here.

● About 16% of the output is from Assam. Here, the oldest oil field of India is located in Digboi.

It is considered a clean environmental fuel or energy resource as less carbon dioxide is emitted from its combustion.

By constructing dams on the river, river water is stored and is made to fall from a height over turbine blades which start moving by the force of falling water. Moving blades of a turbine turn the generator that produces electricity. E.g., the BhakraNangal Project, Damodar Valley Corporation, the Hirakud Project, etc., have hydroelectric power.

When atoms of one chemical element change into those of another, the energy which is released is known as Nuclear Energy. Many places reserve certain nuclear minerals in India, e.g.- Uranium deposits are found in Rajasthan and Singhbhum in Jharkhand. High-grade thorium is located in the monazite sands on the coast of Kerala.

These are eco-friendly energy resources, reduce our carbon footprint, and not emit greenhouse gases that pollute the environment. Being natural resources, they are renewable and are all ''flow'' resources that are inexhaustible and sustainable.

Heat energy from the sun is captured by using a solar energy collector or concentrator and used in various applications. Solar energy has domestic as well as commercial usage. It is used in solar cookers, solar water heating systems, solar air heating systems, crop dryers, refrigerators, etc. The largest solar plant of India is located in Madhapur, near Bhuj, Gujarat.

Biogas is the gaseous mixture produced by the breakdown of organic matter in the absence of oxygen, primarily methane and carbon dioxide. It can be synthesized from kitchen waste (green), agricultural waste containing manure, plant parts, municipal waste, and sewage. Biogas is readily available and hence, acts as a low-cost raw material for electricity generation.

The heat energy present in rocks deep within the earth is called Geothermal energy. The groundwater in these areas absorbs heat from the rocks and becomes warm. It is so hot that when it reaches the earth's surface, it turns into steam used to drive turbines and electricity. These are clean and safe and readily available. Many hot springs or geothermal energy locations are there in India. Among them, the Parvati Valley near Manikaran in Himachal Pradesh is essential.

1. How are minerals formed in the igneous and metamorphic rocks?

Ans: In metamorphic and igneous rocks (or volcanic rocks), minerals tend to seep into small openings - the cracks and the crevices, joints, and faults. While the smaller mineral fills are called veins, the larger ones are called lodes. Initially, mineral occurrences exist in the liquid/molten or gaseous forms. When they rise through the cracks towards the earth's surface, they cool down and solidify, and get deposited there.

2. Mention some important uses of petroleum.

Ans: Some of the essential areas of usage of petroleum are

● At housing complexes for lighting, heating, and cooking purposes.

● As raw materials for chemical industries. Hundreds of by-products are made from petroleum, such as paint, ethylene, synthetic rubber, fertilizers, pesticides, detergent, plastic, etc.

Therefore, petroleum has the broadest range of domestic and industrial uses and is often referred to as 'liquid gold'.

3. Why are the heavy industries and thermal power stations located near the coalfields? Where are the tertiary coalfields located?

Ans: Coal is a heavy/bulky mineral. On using it reduces weight as it is reduced to ash. If the industries are located far away from the coalfields, the transportation cost will be higher. The quality of coal will also differ. That is why the heavy industries and thermal power stations are located near the coalfields. Tertiary coalfields are located in the north eastern states such as Meghalaya, Assam, Arunachal Pradesh, and Nagaland.

4. Why are petroleum refineries together considered a 'nodal industry?’

Ans: Petroleum refineries together comprise a 'nodal industry' for fertilizers, synthetic textiles, and chemical industries. Apart from being a crucial fuel itself (petrol, diesel), petroleum also yields many by-products such as naphthalene, synthetic rubber, fertilizers, etc., after refining. Thus, petroleum refineries provide raw materials to the industries above, thereby acting as a 'nodal industry.'

5. Why do we need to conserve mineral resources?

Ans: As the country's population is growing continuously, we should use mineral resources in a planned and sustainable manner. Minerals are nonrenewable energy resources; i.e., they will get exhausted after a certain point of time due to over-exploitation. Since they are crucial for our economy and not too many viable alternatives are available yet, we need to conserve them properly.

Ans: The differences between conventional and nonconventional energy resources are as follows:

7. Why is solar energy distributed largely in the tropical temperature zone like Rajasthan/ Gujarat/ Maharashtra?

Ans: As Rajasthan, Gujarat, and Maharashtra are located in India's tropical, temperate Zone, it receives adequate solar radiation, which is the most favorable consideration for solar energy generation. Hence, solar energy is distributed mainly in these areas. Moreover, there is a great demand for solar power for lighting and water pumping, irrigation, and water purification for drinking in these areas.

A mineral is defined as “a homogenous naturally occurring substance with definite internal structure.” Rocks are a combination of various minerals.

Mode of Occurrence: Minerals occur in combination with other elements in form of ores. They occur in various forms such as:

Minerals can be classified as:

The various ferrous minerals are:

The various non-ferrous minerals are:

Mica - Mica is extensively used for the manufacture of electronic goods. It has high dielectric strength, low power, loss factor, resistance to high voltage and insulating properties. It can be clear, black, red, yellow, green or brown.

Limestone - Limestone is made up of calcium and magnesium carbonates. It forms the basic raw material for the cement industry. Limestone is also used for smelting of iron ore in the blast furnace.

Thousands of years are involved in the formation and concentration of minerals. They are non-renewable. Planned and sustainable usage of mineral resources is extremely important. Continuous extraction of mineral ores and their usage may lead to their scarcity and permanent non-availability.

Energy resources are of two types:

The various conventional sources of energy are:

2. Thermal Electricity - Thermal electricity is produced when steam from the burning of coal, petroleum, and natural gas drives turbines. This is a non-renewable resource as it uses non-renewable fossil fuels.

The various non-conventional sources of energy are:

Energy is used in every sector of the nation be it the industries, transport, agriculture, commercial or domestic. Sustainable usage and development of energy and its resources are extremely important. Here are a few possible ways through which you can save energy:

Q1. Why are the Mineral and Energy Resources Notes Important?

Ans. The Class 10 Minerals and Energy Resources Notes are important because it gives you a detailed idea about the various minerals, their usage and characteristics, their importance in the national economy, their conservation, energy resources, their types and conservation. The chapter is important for your class 10 board examination and these notes will help you to ace the examination with flying colours.

Ans. A mineral can be defined as “a homogenous naturally occurring substance with definite internal structure.” From the hardest diamonds to the softest talc - all come under the category of minerals. The major categories of minerals are ferrous and non-ferrous minerals. Some minerals from which a metal can be extracted is known as ore. Example - Iron ore is used in the manufacturing of steel, bauxite is the ore of aluminium, etc.