In the previous chapters of the course, we have already learnt about the different groups and experiences of inequality they’ve faced. These groups constantly protested against the exclusion or domination they faced. There has never been a single way of resolving the issue. However, there have always been ways in which various groups have tried to overcome the situation and what efforts were made by the government for the same. The confronting marginalisation class 8 notes provide an overview of how the groups and individuals challenged the existing inequalities.

We provide you with the Confronting Marginalisation Class 8 Notes to help you gain an overview of the complete chapter. These notes are available in the form of PDF which can be accessed and downloaded easily making the revision process easier. 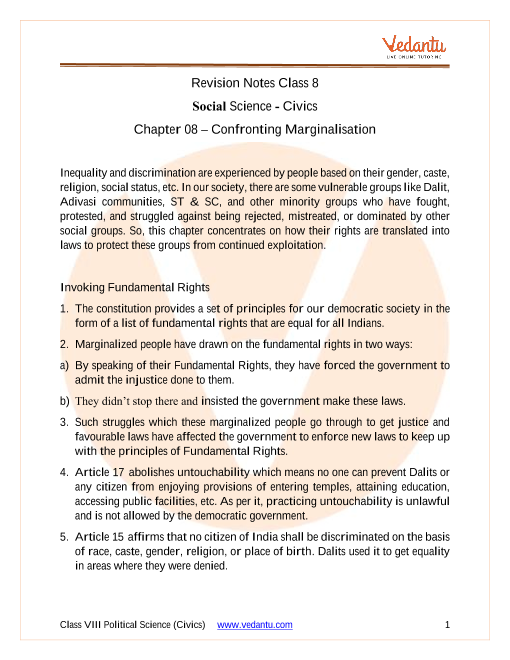 Inequality and discrimination are experienced by people based on their gender, caste, religion, social status, etc. In our society, there are some vulnerable groups like Dalit, Adivasi communities, ST & SC, and other minority groups who have fought, protested, and struggled against being rejected, mistreated, or dominated by other social groups. So, this chapter concentrates on how their rights are translated into laws to protect these groups from continued exploitation.

Protecting The Rights Of Adivasis And Dalits

Other than policies, our country provides specific laws against the exploitation and discrimination of the marginalised communities.

A law or a policy is just done on paper. But people must make an effort to turn these paper works into reality. For this, they should continuously work on these principles that guide citizens' and leaders' actions. The need for equal respect and dignity is for everyone, - the majority classes, the minorities, and the tribal people.

Ans: The fundamental rights which the Dalits can draw to get treated equally and in a dignified manner are as follows—

Ans: The Adivasi activist, C.K. Janu, believes that Adivasi can use the 1989 act to fight against dispossession because of the following reasons—

Ans: Some of the constitutional provisions that provided social justice against discrimination are as follows—

Ans: The constitutional provisions for social justice to SCs and STs are as follows—

Ans: The six major fundamental rights of the Indian Constitution are as follows—

Ans: The term manual scavenging is defined as the practice of removing human and animal wastes from latrines using brooms and baskets, carrying it on heads, and disposing of those at a distance. A person who does this kind of job is known as a manual scavenger. This work was done by Dalit women and girls. More than $13$ lakh persons belonging to Dalit communities do this job and worked in $96$ lakhs dry latrines of private companies managed by the municipalities.

Ans: The reservation policy of the government can be defined as follows—

The several groups and individuals including Adivasis, Dalits, Muslims and women have taken a step forward to protest against the existing inequalities. All of them were always of the opinion that they possess equal rights as all other, being rightful citizens of a democratic country.

Laws for the Marginalised

Specific laws are made by the government to protect the marginalised sector of the nation. Alongside, several committees are formed and surveys are undertaken to devise some policies and laws.

The state and central government put in efforts for the implementation of constitutional policies in tribal areas or regions with a high Dalit population. One of the significant policies is the reservation policy. The laws justify the reservation of seats for this section of the society as providing them with equal opportunities to learn and work.

Protecting the Rights of Dalits and Adivasis

The Scheduled Castes and Scheduled Tribes (Prevention of Atrocities) Act, 1989 was framed to fulfil the demands of Dalits and other castes that the humiliation and ill-treatment faced by the government must be taken seriously. The communities took drastic actions during the 1970s and 1980s.

Under This Act, Several Forms of Crimes Are Distinguished Which Include

Adivasis Demands and the 1989 Act

The 1989 act holds yet another important reason which makes it significant. The Adivasis use this act to defend their right of occupying the land that was traditionally theirs. According to this act, the land belonging to tribal people can be bought by or sold to the bob-tribal people. C.K. Janu is an Adivasi activist who has taken actions against the government, allowing the non-tribal encroachers to enter the tribal area and forcefully evicting them from their places. She also brought into consideration the people who have already been evicted. These people are to be provided with compensation.

1. What is manual scavenging and what are the conditions of the people working in this sector? Explain.

Manual scavenging is defined as the practice of removing the human and animal waste using brooms, baskets and tin plates from the dry latrines and further carrying it on the head to dispose of them to far off disposal grounds.

A manual scavenger is a person who performs this task. Mainly, Dalit women and young girls performed this task. According to the numbers provided by one of the organisations named Andhra Pradesh-based Safai Karamchari Andolan, about 13 lakh workers just from the Dalit community are employed in this task.

The manual scavengers had to face serious health hazards because of being exposed to severe subhuman conditions. They had infections which affected their body frequently, and they are paid mere wages of Rs. 30-40 for a day’s task.

2. Why did the Safai Karamchari Andolan file a PIL in 2003? What did they complain about in their petition?

The government passed the Employment of Manual Scavengers and Construction of Dry Latrines (Prohibition) Act in 1993. According to this law, the employment of manual scavengers is prohibited and a restriction on the construction of dry latrines was enforced. The Safai Karamchari Andolan filed a PIL in 2003 complaining about the existence of manual scavenging. They sought the enforcement of fundamental rights. This led to the union government and state government to take actions for the same.

3. What is confronting marginalisation?

Chapter 8 of Class 8 Political Science is all about the title ‘Confronting Marginalisation’. Marginalization in simple terms is about excluding people and communities who belong to the minority groups. Confronting marginalization means Adivasis, Dalits, Muslims, women, and other marginal groups stand up to argue about being citizens of the same country and therefore having equality in all rights that the country provides to its citizens. Laws involving the rights and protection of these communities are also presented to students.

4. What is the meaning of the term confront in Chapter 8 Class 8 Social science?

In the chapter ‘Confronting Marginalisation’ in Class 8, students learn about how different groups are oppressed in the country and how they stand up to fight for their rights. Before they go into the depths of the chapter, students need to understand what the term ‘confront’ means. Confront is a word that has the meaning of coming face to face with something difficult or challenging something or someone, particularly authority and its principles, and this is called challenging marginalization.

5. What are public facilities class 8?

Public facilities are those services that are made available to the public through the government and the various services they run. These facilities are absolutely necessary for citizens of a country and it is the government's responsibility and duty to provide these facilities to its citizens equally without any marginalization. Facilities like electricity, public transport, schools, colleges, other educational institutions, hospitals, etc. form the sector of public facilities. Their benefits can be reaped by a large number of people together.

6. What are the benefits of using revision notes to study Chapter 8 for studying Social Science for Class 8?

Once students understand how revision notes might aid them with their exam preparations, they will find them very useful. Things can get very hard and confusing for students in Chapter 8 of Class 8 Politics, which deals with new concepts like marginalization and its challenges. Vedantu's notes are among the best since they provide extensive, yet brief notes that simplify all of these new and difficult concepts, allowing students to learn more easily and receive last-minute assistance in their exams. The revision notes can be downloaded free of cost and are also available on the vedantu app.

7. What concept is covered in Chapter 8 of Class 8 Social Science?

Chapter 8 covers what the title says, ‘Confronting Marginalisation’. This particular chapter introduces the concepts of marginalization and the various groups challenging this marginalization. Adivasis, Dalits, Muslims, and Women are often the marginalized groups in the country. The chapter aims to cover the following concepts: