The era of Hitler is perhaps the darkest period in the entire history of the world. However, the coming up of Nazim and the Rise of Hitler did not happen in a single day. There are backstories to it. In the Class 9 History Chapter 3 Notes by Vedantu, you will learn about the backdrop of Hitler’s rise, how he managed to brainwash large swathes of the German population and how he butchered millions of innocent people. The Chapter 3 History Class 9 Notes PDF, which are completely downloadable, will allow you to have a thorough understanding of the chapter highlighting all the important events in the rise of Hitler to power. 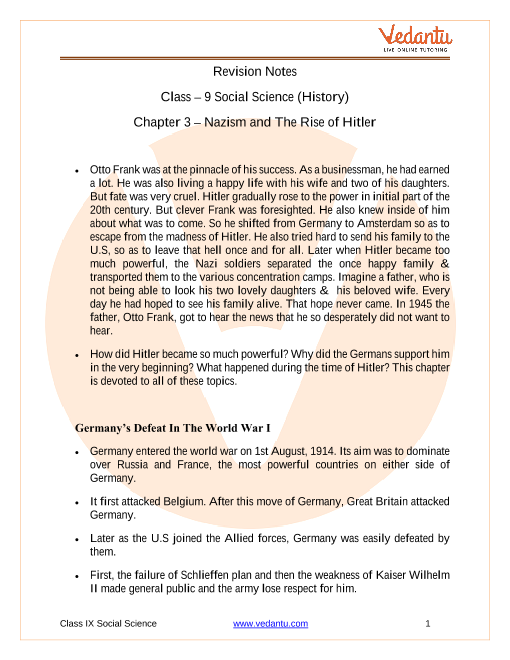 The Defeat of Germany in The First World War

The Peace Treaty of Versailles

As the Central Powers became weaker and the Triple Entente became stronger with the entry of America, Germany decided to negotiate for an armistice. Yes, the war stopped. But Germany had to pay a heavy price after the end. The important points in this part of History Chapter 3 Class 9 Notes are:

The German people felt deeply humiliated by the Treaty of Versailles. They felt it was because of the weakness of the Weimar Republic that the Allied forces were able to enforce such heavy sanctions upon them. Because of this, the conservative nationalistic people of Germany became radical.

The NCERT Class 9 History Chapter 3 Notes describe how the economic condition of Germany deteriorated after the peace treaty.

When Germany was slowly moving into the abyss of economic and political crisis, Hitler was watching with anger and toxic nationalistic sentiment. His military career started as a messenger ( he was deemed unfit for combat) and then he became a corporal.

Later when Germany suffered greatly, Hitler joined the German Workers Party in 1919. Soon he took over the reins of the party and renamed it as National Socialist German Workers’ Party. Later this party became the Nazi party as we know it.

The Dream of a Better Future

Hitler made the German people dream of a better future at a time when the German economic system was in the brink of collapse and the people had no job or money. The Nazi propaganda took advantage of the people’s willingness to believe in anything (however improbable) that promised to pull them out of the misery. In 1932, he got 37% votes in the German parliament.

The Days of Repression

Now comes the part in ‘Nazism and The Rise of Hitler Summary’ where we get to know why Hitler is hated so much across the world. The important points in this part of History Class 9 Chapter 3 Notes are:

Racism and the Pogrom Aimed at Jews

Hitler was also a Proponent of Lebensraum - The concept that the area of the MotherLand needs to be extended so that more and more Germans can have enough space to live. It is with this racist mentality that Hitler went on to massacre millions of Jews. However, it is not the Jews alone who were killed by the Nazi forces- there were gipsies, blacks, Russians, Poles etc., who were also persecuted. Ironically, Hitler did not even spare his own people. Any German who was considered unfit was decreed to be killed.

When it became that Hitler’s Germany won’t last long against the Allied forces, Hitler committed suicide - A man who gave so many lectures on bravery and heroism shoots himself in the head. Was Hitler truly brave then? What was he afraid of?

1. Write a Short Note on the Fall of Hitler.

After the 1940 Tripartite Pact, Hitler considered himself invisible. He desired to capture the Eastern European regions. Thus he attacked the Soviet Union in 1941. But the Soviets crushed the Nazi army and captured vast swathes of German-occupied land. On the hand, since the Nazi army was busy in the East, the Western border of Germany became vulnerable to Britain. Ultimately as the Second World War started, America and a host of other nations joined the Allied force, leading to Hitler’s defeat in 1945.

2. What is the Holocaust? What was the Reason Behind it?

Hitler, out of his racist mentality, massacred 6 million innocent Jews. He was of the opinion that the Jews were beyond ‘purification’ and hence needed to die. The murders were done in a systematic and cold-blooded manner. The Gestapo searched for Jews and transported them to the concentration camps and gas vans. This cruel, soulless programme of Hitler massacring innocent Jews is known as the Holocaust.

3. What led to the rise of Hitler according to Class 9 History?

After World War I, Germany began to face a huge economic crisis. The German soldiers became unemployed after the war. The commerce and trade in Germany was also ruined. Germany was in a huge slump with starvation and unemployment. The prices of the economy rose leading to the fall in the value of money. The Germans began to lose faith in democracy as it started to go against their traditions and culture. Therefore, they gave all their support to Hitler who promised to turn their dreams into reality.

4. What were the problems faced by the Weimar Republic?

The main reason why the Weimar Republic fell into a drawback was because of the Weimar Constitution. The Constitution consisted of a proportional representation. This made it difficult for any other parties in the region to win a lead in the majority of coalition governments. Apart from this, Article 48 of the constitution gave the president the power to rule by decree. This in turn suspended the civil rights of the people, and gave the president the authority to impose emergency.

5. Why was the Nazi propaganda effective in creating a hatred for Jews?

One of the Nazi propaganda to create hatred for Jews was by creating films that promoted this idea. One of the most famous films was titled ‘The Eternal Jew’ where the Jews were referred to as rats, vermin, and pests. They even used mathematics lessons to popularize stereotypes about Jews. Students were taught about how to hate jews. The Nazi Propaganda was so effective in creating hatred for Jews as people began to feel hatred and anger everytime they saw someone who was a Jew.

6. What are the important topics for notes for Class 9 Social Science history chapter 3?

There are many important concepts that students need to learn in Class 9 social science history Chapter 3. Vedantu provides students with revision notes that they can access to score well in their examination. The important topics for notes of this chapter include the defeat of Germany in The First World War, The Peace Treaty of Versailles, Economic and Psychological Humiliation, Political Radicalism, Economic Crisis,  Rise of Hitler, the days of Repression, and many more. These revision notes will help students to clear their doubts in this chapter.

7. Where can I find NCERT Solutions for Class 9 Social Science chapter 3?