Which of the Skull Bones are Movable ?

The article below gives us an insight into the mandible and other skull bones along with their structure and formation.

The human skull is made up of 22 bones which are mostly joined together by ossified joints known as sutures. The braincase (neurocranium) and facial skeleton are separated by the skull (viscerocranium). Its primary function is to protect the brain, the most important organ in the human body.

The neurocranium almost completely encloses the brain, with the exception of the foramen magnum and other foramina at the base of the skull that serves as an entry and exit point for blood vessels and cranial nerves. In addition, the skull supports all the facial structures. 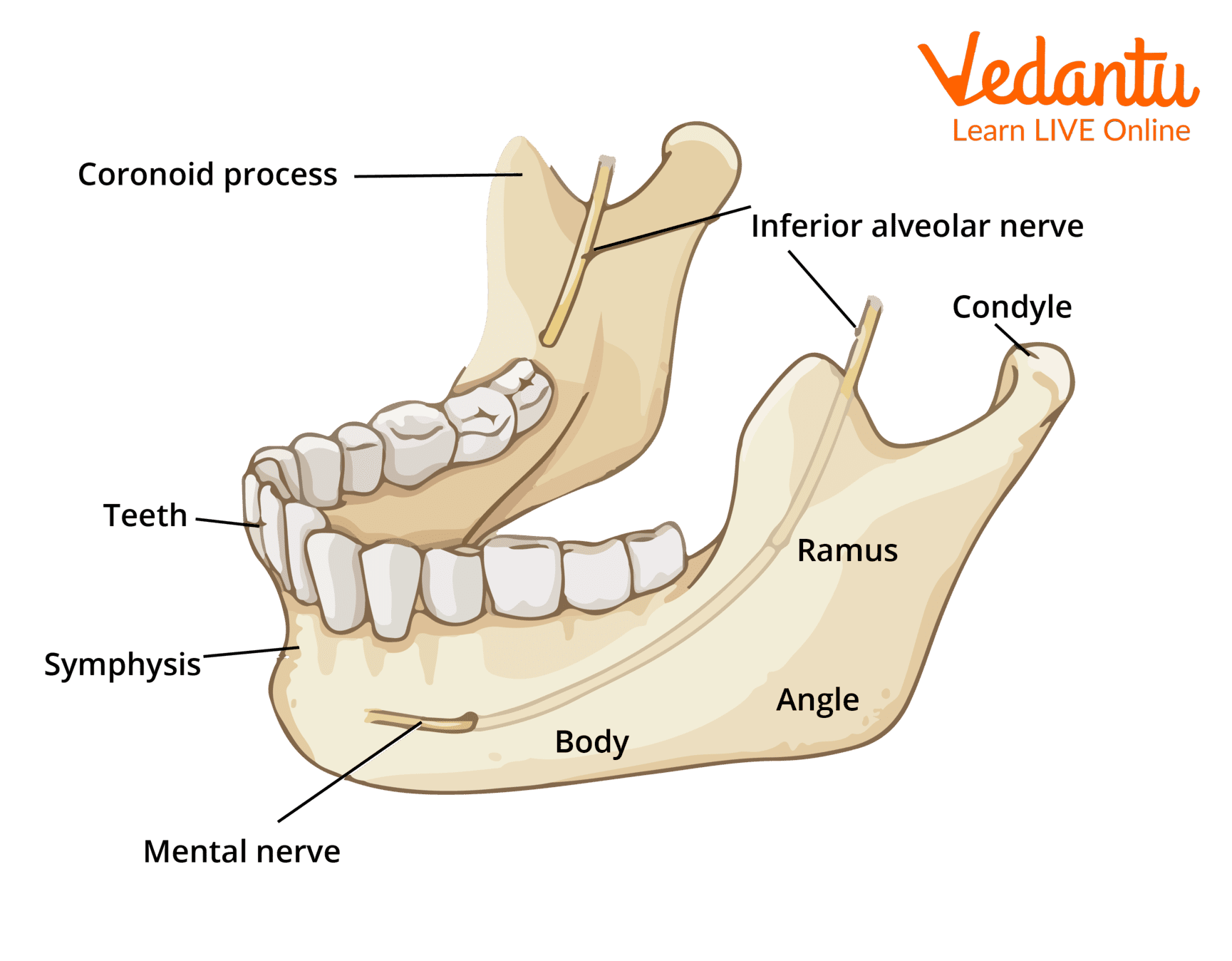 The term “mandible” is derived from the Latin word “mandibula”, which means “one used for chewing”. This mandible bone forms the temporomandibular joint with the temporal bone which is a part of the cranial nerves.

The skull bones are divided into two: the first one is the cranial bones which are limited in covering the brain and the eyes, and the second is the facial skeletal bones which comprise facial bones. These are 8 and 14 in number respectively. 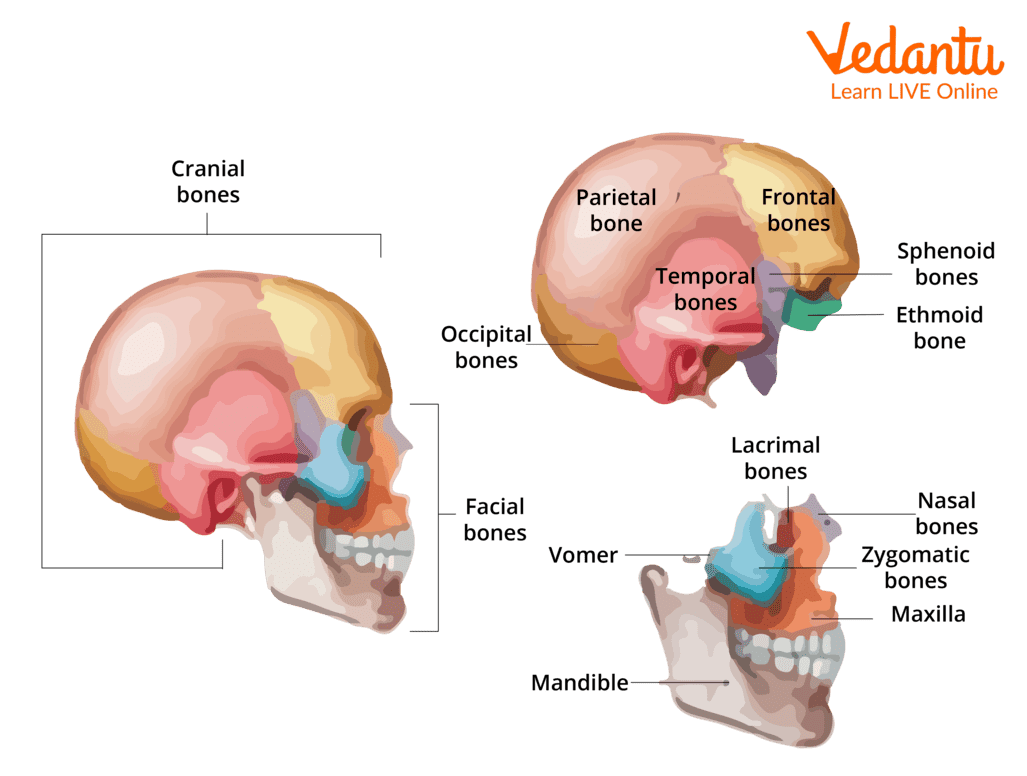 This makes the total number of skull bones to be 22 in number. Although, if the auditory ossicles (bones in the ears) are also included, then the number of bones in the skull reaches up to 28.

The 6 auditory ossicles include:

Which of the Skull Bones is Movable?

The jaw bone name mandible is the only movable skull bone that is present in our facial skeletal bones. It is also considered one of the strongest and the largest bones in the facial skeleton. The mandible forms the lower jaw and is responsible for holding the lower teeth in place. The human body has a movable jaw because of the mandible bone. All the bones except the mandible are joined together.

The skeletal system forms the basic framework of the body around which the whole body is built and structured. All the bones and tissues along with the cartilages and the joints from the whole skeletal system. All of these parts are rigid and tough in nature and have a function of movement. The skeletal system's joints are crucial because they enable a variety of movements to occur at various points. The movements of the human body would not be visible if the bones lacked joints.

The human body would not have functioned as it does without the skeletal system. We would have been a lump of mass and muscle if there were no bones in the body. Some of the major functions of the skeletal system are described below:

It provides the needed support to all the organs and the muscles which help them in moving efficiently. The whole skeletal system is based on a solid framework which safeguards the human body and its organs from the external environment. This also helps in maintaining the overall shape of the human body.

One of the major functions of the skeletal system includes protection. It plays a role in protecting our internal organs and other delicate body organs such as the brain, heart, lungs and spinal cord. Our cranium or the skull protects our brain and eyes, our ribs are meant to protect our heart and lungs and our vertebrae i.e. the spine/backbone protect our spinal cord.

Bones and joints work together to move different organs of our body. The muscles are attached to the bones to make them move and function properly. The attachment of bones and muscles is carried out by tendons which are tough inelastic bands.

The primary function of the bone matrix in the skeletal system is to store or preserve various kinds of vital minerals that are necessary for promoting the growth and repair of human cells and tissues. By storing and releasing calcium ions into the blood cell as needed, the cell matrix serves as our body's calcium bank.

The skeletal system's bone cells are crucial in releasing the hormones that have been generated by the corresponding endocrine glands, for use by the body in its various metabolic processes. In addition to these duties, the skeletal system also helps to control blood sugar.

The movable bone in the skull is called the mandible or the jaw bone that helps us in moving our jaw or mouth for tasks like chewing or talking. There are a total of 28 bones in our skull that also include the auditory ossicles. Out of this, only one is movable and all others give the skull a framework and support to be still and strong.

FAQs on Which of the Skull Bones are Movable ?

1. Which is the longest bone in our body?

2. How important is the chapter on locomotion and movement from CBSE’s point of view?

The chapter ‘Locomotion and Movement’ is considered a moderate chapter from an examination point of view. It has to be covered thoroughly while remembering the major points on tips. You can choose not to go into detail with this chapter since it is not as frequently asked as other chapters. The chapter covers topics that cover the basics of locomotion and movement along with the study of the skeletal system and the division of bones.

3. What are temporomandibular disorders and what are their causes?

Temporomandibular disorders or TMDs are disorders that result in pain or tenderness around one or both of your temporomandibular joints. Some of its symptoms include difficulty in chewing, jaw clicking while chewing, law locking, throbbing temples, headaches, ringing ears etc. This is quite a common disorder and can have causes such as: