Feather is known as the component structure of all modern birds' flight surfaces and outer covering. Feathers apparently evolved from the scales of birds’ reptilian ancestors, being Unique to birds. Several different types of feathers are used for flight, insulation, body contour forming, sensory reception, and show reception. 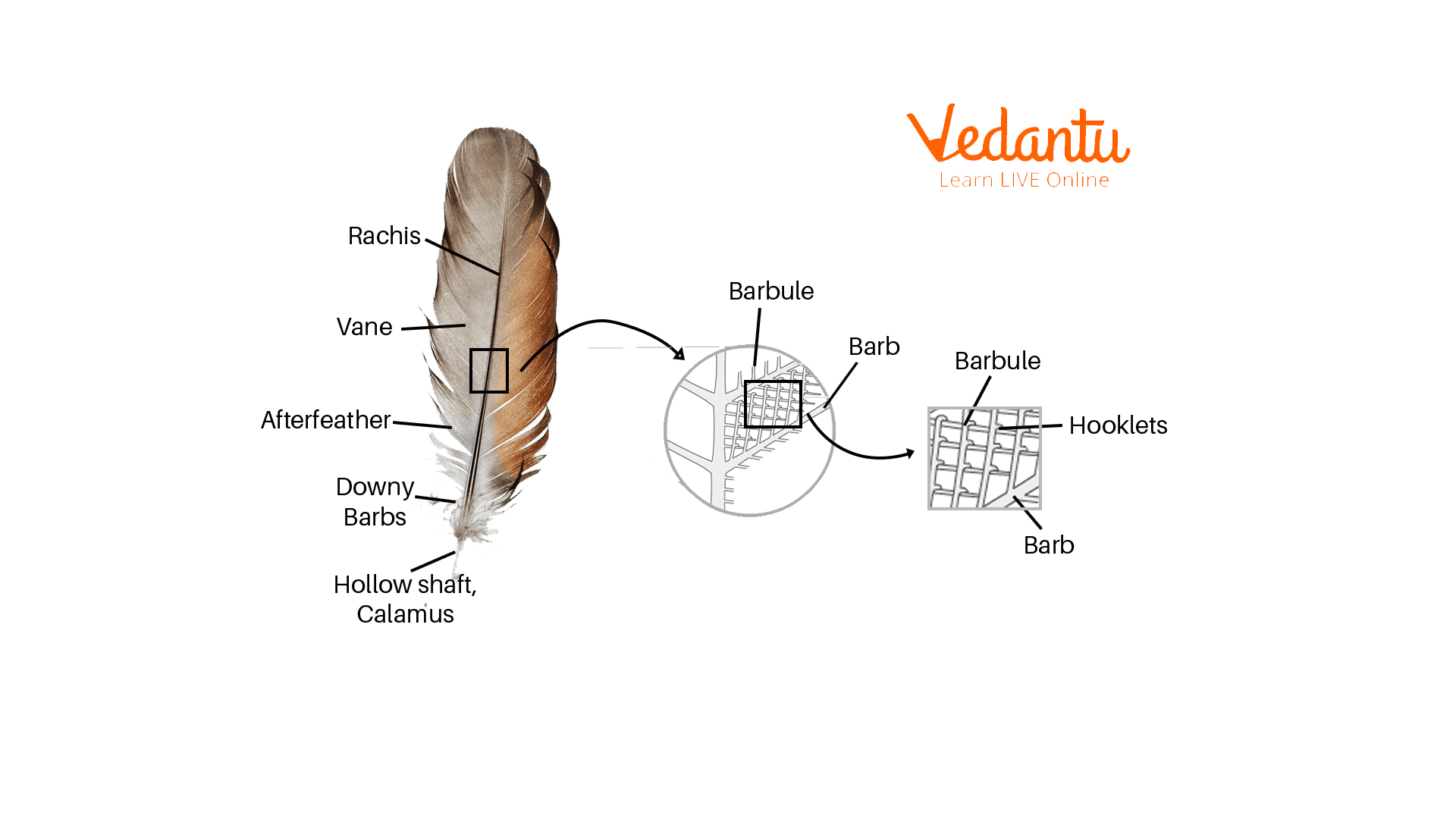 There are usually six different types of feathers based on morphology. 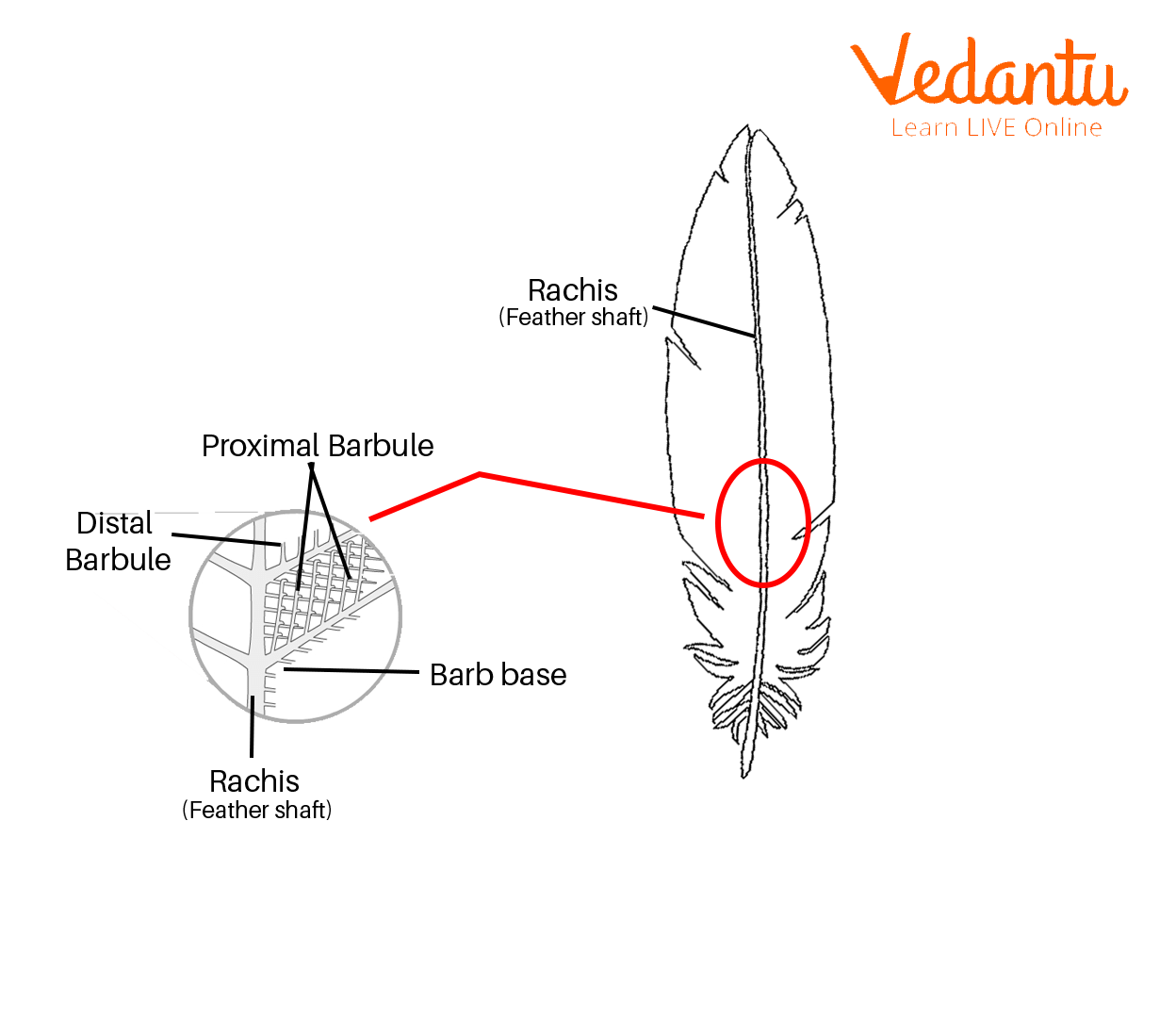 Parts of a Feather

Let us discuss the parts of a feather in detail. The typical feather contains a central shaft (called rachis), with the serial paired branches (called barbs) forming a flattened, generally curved surface, called a vane. The barbules, as well as the barbs, have roots, and the barbules of neighbouring barbs are connected by hooks, stiffening the vane. In several birds, either some or all of the feathers lack the hooks or the barbules, and the plumage has a hairlike, loose appearance.

Feathers have been used as regalia and for ornamentation in several societies, both highly developed and nonliterate. Hats and other accouterments are featured or have been constructed totally of feathers and, at times, either entire wings or the pairs of wings down to modern times. Many governments have protected the colourful species of birds from preventing the extinction of feathers at the hands of feather hunters. Feathers from domestic fowl slaughtered for meat are given to poultry farmers as a regular by-product and are used for padding, decoration, and insulation.

Feathers are the most complex integumentary appendages found in vertebrates, and they are formed in tiny follicles that contain keratin proteins in the epidermis or outer skin layer.

The important functions of feathers are given below:

Feathers are both excellent and soft at trapping heat; therefore, sometimes they are used in high-class bedding, especially blankets, mattresses, and pillows. Also, they are used as filling for outdoor bedding and winter clothing, such as sleeping bags and quilted coats. Eiderdown and goose down have a lot of lofts, which means they can extend from a compressed state to catch a lot of insulating, compartmentalized air.

In Religion and Culture

Eagle feathers contain great spiritual and cultural value to the American Indians in the United States and First Nations peoples as religious objects in Canada. In the US, the religious use of hawk and eagle feathers is governed by the eagle feather law, which is a federal law limiting the possession of eagle feathers to enrolled and certified members of federally recognized Native American tribes.

Evolution occurs at a very slow pace to be seen by a human.

The evolution of birds started in the Jurassic period Mesozoic era. The first bird arrived from parades of theropod dinosaurs.

Birds are defined as the descendants of archeopteryx. The lightweight, feathered, small classic structure and wing plan gradually merged over millions of years and led to the formation of birds.

1. When did the first bird evolve?

Ans: Some records suggest that the first bird evolved 60 million years ago after the end of the Cretaceous period of the Mesozoic era.

2. What was the first bird?

Ans: Archaeopteryx is the intermediate of birds and reptiles. But many people consider it as the first bird. It is 150 million years old.

3. What car characteristics do birds evolve?

Ans: Following are the characteristics of birds that evolved : Hollow bone, wishbone, a three-toed foot, and a backward-pointing pelvis.

FAQs on Evolution of Feathers

1. Explain the Functionality of Feathers in Birds?

Answer: A few birds contain a supply of powder down feathers that grow continuously, with very small particles regularly breaking off from the barbule’s ends. All these particles form a powder that sifts through the feathers on the body of the bird and acts as a feather conditioner and waterproofing agent.

2. What is Meant by the Colouration of Feathers?

Answer: The feather’s colours are produced by microscopic structures, by pigments that can reflect, refract, or scatter the selected light wavelengths, or by a combination of both.

Most of the feather pigments are carotenoids (red, yellow, orange) and melanins (beige and brown pheomelanin, grey and black eumelanin); the other pigments takes place only in certain taxa – the yellow to red psittacofulvine (that are found in some parrots) and the green turacoverdin and red turacin (porphyrin pigments found only in turacos).

3. Give the Distribution of Feathers?

Answer: Contour feathers are not distributed uniformly on the bird’s skin except in a few groups such as the ratites, screamers, and penguins. The types of feathers in birds (many birds) emerge from pterylae, or feather-producing skin tracts; between the pterylae, there are apterylae, or feather-free skin regions (or apteria). Filoplumes and down can arise from the apterylae.

Answer: The surface of the feather is home to a few ectoparasites, notably feather mites and feather lice (or called Phthiraptera). Typically, feather lice live on a single host and can move only from parents to the chicks, between mating birds, and, by phoresy, occasionally.

A Brief on Prehistoric Earth