The country of India is vastly expanded. There is the Himalayas in the north and the Arabian Sea in the west. India is bounded by the Bay of Bengal which is situated in the east and it has the Indian Ocean in the south. The population of India is also on the increase as it is considered to be the second most populated in the entire world. When it comes to the area, India is just six countries behind.

For the students who are appearing in the exams of Class 6, it is important to take a look at the Class 6 Geography Chapter 7 notes in order to have a better understanding of the chapter. With these notes, they can score good marks and produce better results without any difficulty or stress. 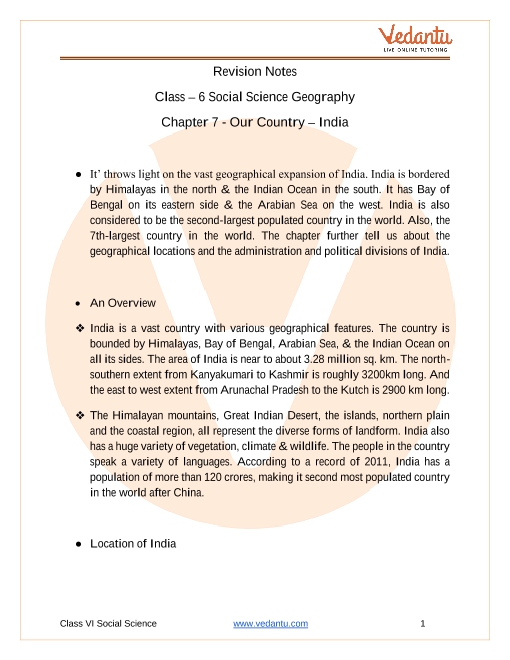 Jammu & Kashmir, the newly made union territory, is known as the crown of India because the shape of the region is like a crown as well as it is located at the top of India. Punjab and Haryana both have common capital , Chandigarh. The reason behind this is that Haryana was an important part of Punjab until 1966.

The central part of country consist of states like Chhattisgarh and Madhya Pradesh. It was the largest state in the Indian province until 2000.

The historical Kalinga war was also fought in Orissa. This war changed Asoka’s life & made him different from all others. He started to embrace non-violence and follow Buddist preaching.

This region is also known as the Land of Seven Sisters. Sikkim also happens to be a single state that is excluded from the Seven Sisters.

Karnataka is also famous for the biotechnology & software industry. Kerala is considered to be God’s Own Country & is a popular tourist destination. Kerala has a high literacy rate.

India is a vast country with various kinds of physical divisions. They are divided into:

An Overview of Our Country: India

India is a land filled with some of the most beautiful and lofty mountains. There are the Northern Plains, the Great Indian desert, some uneven plateaus, as well as the islands and coasts. Not to mention that India is the host of several varieties of flora and fauna. Home to many climates and vegetation, India is truly one of the most amazing places. There are different languages and cultures in every single location in this country. With a population of about 120 crores, India is considered to be heavily populated. Students can take a look at India Our Motherland notes for more details.

The Location Setting of India

The location of India is right there in the northern hemisphere. Also, The Tropic of Cancer which is about 23°30’N) passes right through the middle of the country. From the southern portion to the northern portion, the Indian mainland extends just between 8°4’N and 37°6’N that are the latitudes. From the western portion to the eastern portion, India stretches just between 68°7’E and 97°25’E that are the longitudes. There are a total of seven different countries that have to share the boundaries of their land with India. More details are available at Class 6 Geography Chapter 7 notes.

The Administrative and Political Divisions of India

We all know that the country that we live in is very vast. There are about 29 states and 7 different Union Territories in the country of India. The addition of Telangana as a new state made the total number of states to 29. This happened in the year 2014 in June. Previously, Telangana was a smaller part of the state Andra Pradesh. The capital of India is Delhi. The states which are a part of India have been divided on the basis of the language and the community that resides there. Students will be able to find more details with India Our Motherland notes.

Some Important Physical Divisions of India

There is a very diverse nature of physical features present in India that includes plateaus, mountains, islands, and coasts. For example, The northern border of India has the Himalayas which means “the abode of snow”. These mountains are properly divided into three different but main ranges which run parallel. These ranges are known as Himadri or the Great Himalaya which is situated on the northernmost border. The highest peaks of the world are situated right here on this particular mountain range. The Himachallies or Middle Himalaya is situated on the Southern side of the Great Himalaya.

There are the northern Indian plains which are situated in the southern side of the Great Himalayas. These plains have a very flat and levelled surface. These surfaces are formed when the alluvial deposits are washed down from different rivers. India is also home to many different rivers such as the Ganga, the Indus, the Brahmaputra, along with some of the other tributaries as well. The rivers are responsible for providing proper land and fertile soil for the cultivation and farming of crops.

The western section of the country has the Great Indian Desert. This area is a very large and stretchy piece of land filled with hot and dry sand. The northern plain has the Peninsular Plateau on the Southern side. This region is filled with different valleys and innumerable hill ranges too.

One of the most popular and old ranges known as the Aravalli hills is situated in this particular region. The border for the Aravalli Hills is situated on the North-west section. Some of the other ranges which are important would include the Satpura range and Vindhya range. These ranges have the rivers Tapi and Narmada flowing through them. These rivers are most west-flowing and ultimately go to drain at the Arabia Sea.

Lakshadweep Islands are located near the location of the Arabian Sea. These islands are mostly made up of corals and situated off the coast of Kerala. There are also some other islands such as the Andaman and Nicobar Islands that lie around the southeast portion of the Bay of Bengal in the Indian Mainland.

1. Mention the Different Physical Divisions of our Country India.

Answer: The Himalayas, The Peninsular Plateau, The Northern Great Plains, the Islands, and the Coastal Plains.

3. Which 2 Major Rivers Fall Right Into the Arabian Sea?

Answer: The two rivers that fall into the Arabian Sea are Tapti and Narmada.