Working of Institutions is the chapter which explains the importance of rules and procedures which regulate a leader’s rule in a democratic government. These rules and regulations are projected by and enforced by institutions found within a government. This chapter’s approach to political science entails how institutions function in India and how they affect major decisions influencing the State’s ruling. In addition to the before-mentioned, this chapter majorly concerns itself with 3 institution’s which are known as the state’s agencies: (i) The legislature (ii) The judiciary (iii) The executive branch of the government. To understand the working of institutions, refer to the working of the institution’s class 9 notes. 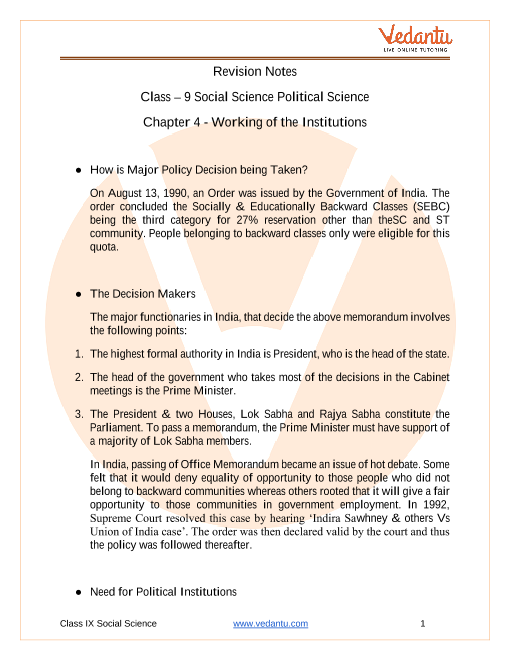 Working of Institutions and Policies

August 13, 1990, is when the court of India and the legislative assembly unanimously decided to issue an order called the Office Memorandum, containing legislation and statutes on job reservation benefits for the SEBC (Socially and Educationally Backward Classes). The statutes further state that other than SC and ST, 27% of job reservation benefits are guaranteed to people who fit the SEBC category. It works as a quota only for those individuals who are less privileged.

Questions on the decision-makers behind the order called the Office Memorandum is what will reveal to students how such policies were brought about in the first place. What was their need? Were they efficient as laws? Did people adhere to them willingly? These are questions which serve to portray the politics which preceded the working of political institutions in India. Various positions in the Indian government would be involved in such decisions. Keeping that in mind, the major functionaries without whom such acts cannot be established are:

The Government of India

The Legislative Body of India

The Role of Political Institutions

The working of political institutions in India is equivalent to the machinery that helps the government of India function. Without such institutions, a democratic government is going to find it hard to perfectly reflect the interests of its citizens. So one must ask themselves the pertinent question, What is the role of institutions?

Role of the Parliament

The following list reflects the powers of the Parliament and the reason why it is the most significant political institution in India.

1. Which House is more important in the Parliament?

Both the houses (Lok Sabha & Rajya Sabha), have a major influence on governmental actions, without them existing the Parliament would not be able to come to a conclusive decision. The two houses allow the Parliament to discuss a subject matter in an open forum with two sides. However, the Lok Sabha can exercise supreme power on most matters.

The two houses have equal power in terms of voicing what pertinent issues they think should be addressed. However, when the two houses conduct meetings between them, it is the Lok Sabha which plays the deciding factor.

2. What is the role of the executive branch of the government?

The role of the executive branch is essentially divided between two types: I. the political executive and II. the permanent executive. Political executives are those elected by the people and are established as such for a specific period of time. E.g. the prime minister. Permanent executives are those who are elected for a longer duration of time, they are also known as civil services. Even after the ruling party loses or changes, civil servants remain in office.

This question will be better answered if one reviews the role of the government’s executive powers by referring to the working of institutions class 9 NCERT notes.

3. What is the working of an institution?

In a democracy, people choose their representatives. The representatives then form the government to govern the state and its citizens. To ensure that democracy functions effectively and for the welfare of all, our Constitution has provisions of various independent institutions. The chapter teaches you how these institutions work, their importance and their relevance. Some of these institutions are the Parliament, the Supreme Court and the Election Commission. All the institutions are independent and work together to further democracy and promote democratic values.

4. What are institutions in Class 9 Political Science Chapter 4?

The Institutions mentioned in Class 9 Political Science Chapter 4 are:

5. What do you understand about the term “Council of Ministers”?

6. Who has the authority to make laws in a democracy?

7. What is the role of the judiciary?

Judiciary is an important pillar of democracy. It ensures that the democratic form of government is not converted into an authoritarian form. It protects the basic fundamental rights of the citizens. It protects citizens from the arbitrary laws of the government. It settles disputes between individuals, governments and between citizens and government. It oversees and supervises the functioning of all the courts in the country. It is the highest court of appeal. Its independence ensures that it can perform its functions without interference by any other organ of democracy. To study more and revise the topics students can download the Class 9 social science notes free of cost from the vedantu website.