CBSE Class 6 Geography Chapter 8 notes are carefully prepared by the expert teachers who are having years of experience in teaching Social Science. These India - Climate, Vegetation and Wildlife Class 6 notes are easy to understand, comprehensive, and a good study material to refer to before the board exams. Students can download notes of Class 6 Geography Chapter 8 in free PDF format to study offline as well. 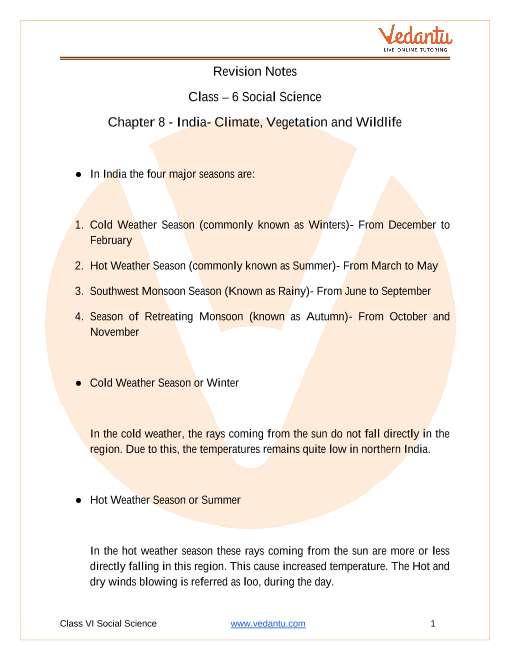 In India the Four Major Seasons Are:

In the cold weather, the rays coming from the sun do not fall directly in the region. Due to this, the temperatures remains quite low in northern India.

In the hot weather season these rays coming from the sun are more or less directly falling in this region. This cause increased temperature. The Hot and dry winds blowing is referred as loo, during the day.

This season starts by the onset and advance of the monsoon. The direction of the wind is from the Arabian Sea and the Bay of Bengal towards the land. These winds carry moisture with them. Once these winds strike the mountain barriers, rainfall occurs.

Season of Retreating Monsoon or Autumn

Winds start to come back from the land area to the Bay of Bengal. This season is referred to as the retreating monsoons. The southern parts of India, mainly Tamil Nadu and Andhra Pradesh receive rainfall in this season.

Why are Forests Necessary?

Forests are very useful and perform various functions like release oxygen for us to breathe and absorb carbon dioxide. The roots of the plants bind with the soil; preventing soil erosion. Timber for furniture, fuelwood, fodder, medicinal plants and herbs, lac, honey, gum is obtained from forest.

Forests are the natural habitat of wildlife. Natural vegetation nowadays has been destroyed to a large extent because of the cutting of trees for human purposes.

Forests are home to a number of species of animals and a large number of reptiles, amphibians, mammals, birds, insects and worms living there. The tiger is India's national animal. Tiger can be seen in various parts of the country. Gir forest in Gujarat is referred as the home of Asiatic lions. One-horned rhinoceroses and elephants could be seen in the forests of Assam. Elephants can also be seen in Kerala and Karnataka. Camels and wild asses can be seen in the Great Indian desert and the Rann of Kuchchh.

Peacock is the national bird of India. Some other birds commonly found are parrots, pigeons, mynah, geese, bulbul and ducks. The bird sanctuaries which are created to provide a natural habitat for these birds.

Q1. What is the climate and vegetation of India?

Ans: India has a diverse spectrum of natural plants due to its diverse climatic conditions. The tropical evergreen forest, tropical deciduous forest, thorny bushes, mountain vegetation, and mangrove forests are the five types of vegetation found in India. The climate of the Indian subcontinent is of diverse nature and is characterized by a wide range of meteorological conditions occupying a large geographic area and is also characterized by varying topography, making generalizations difficult. South India's climate is usually hotter and more humid than North India's.

Q2. What type of climate is there in India?

Ans: As a result of India's large geographic area and diverse topography, generalizations about the country's climate are impossible. In general, the climate in South India is warmer and more humid when compared to the climate in North India. The majority of India is subtropical, which implies scorching summers, humid rainy seasons, and moderate winters. Summers are pleasant and winters are chilly in the hilly regions. Between June and August, the monsoons hit the majority of India. For detailed notes on Chapter 8 of Class 6 Geography, visit Vedantu website or mobile app and download the notes free of cost.

Q3. What is natural vegetation? Give some examples of vegetation from Chapter 8 of Class 6 Geography?

Ans: The term "natural vegetation" refers to plants that have not been cultivated by humans. Temperature and moisture play a role in plant development. It also depends on parameters such as slope and soil thickness. It refers to grasses, bushes, and trees that develop naturally without human intervention or assistance. Other commercially significant species include bamboos, sal, shisham, sandalwood, khair, kusum, arjun, and mulberry. The reduction in temperature with increasing altitude causes a shift in natural vegetation in mountainous locations.

Q4. Where can I download the PDF version of the Solutions of NCERT Chapter 8 of Class 6 SST Geography?

Ans: The solutions are easily available on the Vedantu site.

For more modules and help regarding various topics of Class 6 Geography and other subjects as well you can visit the Vedantu site.

Q5. What are the factors that affect the climate of India?

Ans: The climate of India is influenced by variables like latitude, altitude, pressure, and winds. From the Rann of Kuchchh in the west to Mizoram in the east, the Tropic of Cancer runs through the nation. India is located in the north-eastern hemisphere. Similarly, adverse effects of the modern world are also evident. The greenhouse effect is one of the major reasons behind climate change. Some gases present in the atmosphere of the Earth function like greenhouse glass, trapping the sun's heat energy and also preventing it from escaping into space, resulting in global warming.