The mustard seeds are tiny globules that are generally used as spices and for oil extraction. When they're whole, they're almost flavourless. But crack or grind these tiny seeds, add a splash of water, and the mustard flexes its flavour. This is because grinding releases two compounds, myrosin, and sinigrin, which, when combined with the water, cause a chemical reaction that gives mustard its heat.

The resulting paste can not only be used in cooking but also clear your sinuses and heal your body. In the following sections, we will study the properties, types, and functions of the mustard seed.

Mustard is a condiment made from the seeds of the mustard plant (Sinapis alba; Brassica juncea; or Brassica nigra). To make a paste or sauce ranging in colour from bright yellow to dark brown, whole, ground, cracked, or bruised mustard seeds are combined with water, vinegar, lemon juice, wine, or other liquids, salt, and often other flavourings and spices. The seed has a strong, pungent, and slightly bitter flavour. Mustard condiments range in flavour from sweet to spicy.

Mustard is frequently combined with sauces, mayonnaise, and cheeses and is particularly popular as a condiment for sandwiches, hamburgers, corn dogs, and hot dogs. It's found in various dressings, glazes, soups, and marinades. Mustard is used as a condiment in the cuisines of India and Bangladesh, the Mediterranean, northern and southeastern Europe, Asia, the Americas, and Africa, making it one of the world's most popular and widely used spices and condiments.

Brassica juncea L. is a member of the Cruciferae or Brassicaceae family of plants and is known by various common names, including Chinese mustard, brown mustard, and oriental mustard.

The tiny, rounded seeds of the Brassicaceae family plant, mustard seeds(Brassica juncea), are used for oil production. Brassica juncea seeds are hydro-distilled to produce mustard oil. The oil has a colour ranging from pale yellow to brownish-yellow with a strong, unpleasant odour. Allyl isothiocyanate is the primary ingredient in the oil. The oil is mostly used for flavouring purposes.

A spicy essential oil of mustard or the pressed oil used for cooking can be referred to as mustard oil. The volatile oil produced after the mustard seed is pulverised, combined with water, and distilled, which yields the essential oil. Dry distillation of the seed is another method for producing it.

The scientific classification of mustard (Brassica juncea) is as follows.

The simple, petioled leaves are oblong or obovate in shape, and the blooms have four yellow petals and four free sepals, as well as two long and two shorter stamens. The flowers are bisexual. 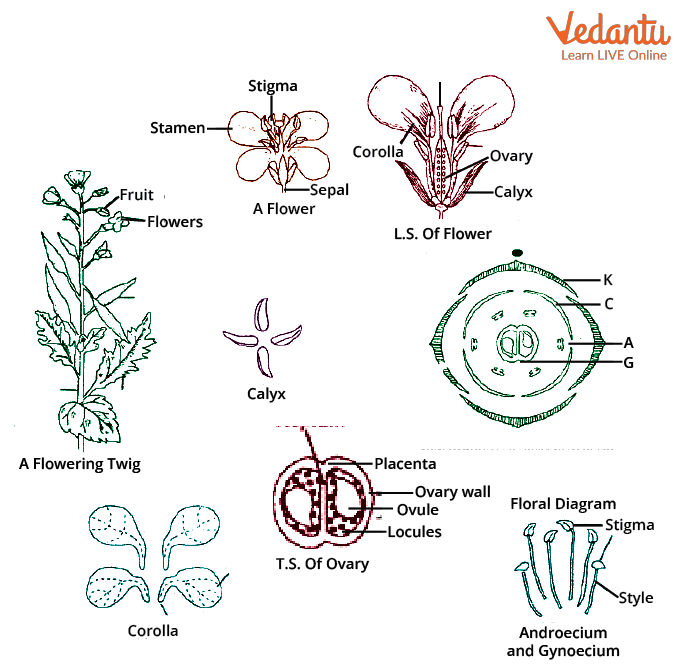 With more than 360 genera and 4,000 species, the family Brassicaceae is one of the major dicot groups. For its edible leaves, roots, stems, buds, flowers, and oilseed, it is planted and greatly varied practically everywhere in the world. Some weedy members of this family provide an experimental platform for the advancement of modern biology, and the wild germplasm of this group could be exploited to generate cytoplasmic male sterility for the creation of hybrid seeds.

Other major importance includes culinary. The most frequent usage of mustard at the table is as a dipping sauce for both warm and cold types of meat. Additionally, it's a component of barbecue sauce, vinaigrette, marinades, and mayonnaise. It is a favourite condiment along with bratwurst, pretzels, and hot dogs. It is frequently used to make mustard soup in the Netherlands and northern Belgium. A mixture comprising two or more immiscible liquids, such as oil and water, can be stabilised using mustard as an emulsifier. Mustard helps prevent curdling when added to hollandaise sauce.

As is common in East Indian cuisine, mustard can be used as a major spice in recipes. It can give some Indian dishes a distinctive flavour when added to mixed vegetable or fish curries.

Mustard doesn't need to be refrigerated for safety because of its antibacterial qualities and acidity. It won't support the growth of mould, mildew, or dangerous germs. Although it may dry out, lose flavour or become brown due to oxidation, mustard can last an endless amount of time without becoming unusable or hazardous.

The tiny, rounded seeds of the Brassicaceae family plant (Brassica juncea) produce mustard seeds. The flavour of the seeds is robust, spicy, and bitter. Brassica juncea L. is a member of the Cruciferae or Brassicaceae family of plants and is known by a variety of common names, including Chinese mustard, brown mustard, and oriental mustard. The flowers are bisexual, having four whorls. With more than 360 genera and 4,000 species, Brassicaceae is one of the major dicot groups. For its edible leaves, roots, stems, buds, flowers and oilseed, it is planted and greatly varied practically everywhere in the world.

1. What is the nutritive value of mustard?

Mustard has good nutritive worth. Per teaspoon, mustard has an average calorie content of 5 kcal. Selenium and omega-3 fatty acids are only two of the numerous vitamins and elements present in mustard seeds. The phytonutrients, vitamins, minerals, and antioxidants found in mustard seeds are abundant. Both plant sterols and essential oils are abundant in the seeds. Brassicasterol, sitosterol, campesterol, avenasterol and stigmasterol are a few of the crucial sterols. They are a great source of vital B-complex vitamins like pantothenic acid, pyridoxine (vitamin B6), niacin, thiamin, folates, and riboflavin.

2. What is the chemical composition of mustard?

3. Can mustard cause allergies?

When the immune system reacts negatively to a particular food, it results in a food allergy. Despite the food being safe, the body makes an allergic antibody against it. Strong mustard can irritate the tongue, mouth, and throat and cause the eyes to get wet. Rarely, some people may get allergic responses, including anaphylaxis, from any portion of the mustard plant. Anaphylaxis is a severe allergic reaction that could be fatal. "Sin a 1" is the primary allergen in yellow mustard, and "Bra j 1" is the primary allergen in brown mustard. Even if mustard is cooked in food, the enzymes don't degrade much in the digestive system, therefore, the allergen is still present.