The newspaper often incorporates articles with headlines like ‘Key Expectations from Modi Government after years of Turbulence- Union Budget 2020’. Have such articles ever left you wondering what the role of the government is and what it even is in the first place? Well, in this chapter, students will learn elaborately about what is a government and how it works to run the country. Further, you’ll also learn about the types of governments- democracies and monarchies. What is government class 6 notes will give you brief insights into everything you need to know about the government, and it’s working. 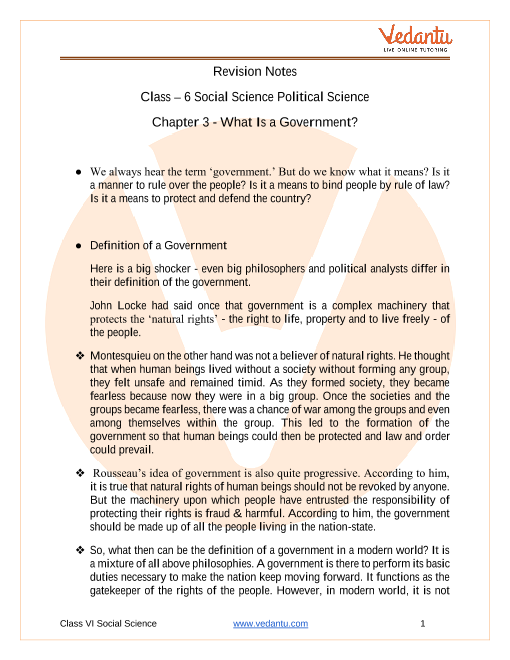 What is Government Class 6 Notes Overview

A Government is of prime importance and the very pillar of decision-making in a country. A government plays a vital role in making crucial decisions of a company and even establishing different facilities for the citizens of the country. For instance, the government looks into elements like building schools and roads, improving the supply of electricity, lowering the prices of onions and other essential household items when they get expensive, and so on. Furthermore, the government also needs to take necessary actions on distinguishing social issues and similar elements like regulating and administering railway and postal services. Along with this, the government has a wide range of roles and responsibilities. You will learn more about each of these roles in this chapter.

Now that you are familiar with what a government is and what its fundamental role is, you’ll learn in brief about different levels of government. So, if you’re wondering how the government organizes itself to suit all these roles, worry not because this section of the chapter has got you covered. The government primarily comprises about three levels. These three levels include- local, state, and national levels. The local level includes a town locality or your village as a whole. The state-level includes an entire state like Maharashtra or Karnataka. Lastly, the national level includes the entire country. These levels of the government are thus distributed with essential roles and responsibilities for the smooth running of the country.

Laws and the Government

This section of the chapter deals with different laws associated with the government. The government, in general, is the law-making body of a country. It thus makes specific laws that the citizens of the country must abide by. Along with making relevant decisions, the government can even enforce them. For instance, every individual driving a motor vehicle must ensure getting a license. If caught without a license, they can be fined a hefty amount of money and even jailed under rare circumstances. Similarly, there is a wide range of such laws that people need to adhere to. They may experience unfortunate punishments if they do not follow these laws. Students will learn more about all the laws they must follow and what the government may do if you do not follow them.

The last section of this government deals with the votes for women. The government does not willingly partake in power anywhere throughout the world. Around the USA and Europe, women and the poor struggle with several discriminations. They have to fight for their rights, for basic rights to participate in the government. This section talks about distinguishing problems that women face while trying to participate in the government. Furthermore, it also gives us different examples of how women fought for their rights to vote. Students can now refer to what is government class 6 notes to learn more meticulously about this section.

1. Write in brief about the suffrage movement and what is accomplished.

Suffrage, in a nutshell, means the very right to vote. In the earlier days, women and the poor living in the USA underwent several struggles as they did not have the fundamental right to vote. They further fought for these rights and thus established a movement known as the suffrage movement. They then gathered in abundance during World War I. After a lot of fighting and struggling, these women finally succeeded in the year 1920 in the USA. On the other hand, women in the UK succeeded in the year 1928.

2. Write about your understanding of the word ‘government’.

Government plays a fundamental role as the decision-making body of a country. A government is of different types- monarchy and democracy. A few of the most prime roles of a government include-

3. What are the types of government?

The different types of government are:

4. What are the functions of a government?

The government's duties involve planning and implementing laws on its citizens, which every citizen is to follow, to have an organized society. The government has the power to enforce the decisions that it makes on its people. For instance, if someone is caught driving a vehicle without a licence, they will be fined or jailed. The government also must maintain good and peaceful relations with the other countries, while also protecting its boundaries. In case of any natural disaster, the government must provide first aid to its citizens and look after their needs.

5. What are the three levels of government Class 6?

6. What is the work of the police? Who is in charge of all the police stations in a district?

The main works of the police include,

The Hindu Succession Amendment Act had sought to bring the women at par with their male counterparts. As it was seen in history, women had no right to demand their right in the property or family’s agricultural land, because after the demise of the father, the property was usually divided among the sons.  With the help of this act, this situation is reversed, and the daughters and wife have the right to claim the rights of their fathers or husband. Therefore, this law can be also seen to boost the independent status of the women in a land where they are always treated as the subordinate to man.