Class 10 Social Science Political Science Chapter 1 is about power-sharing. Most of the democracies have a system of sharing power among its organs. Judiciary, legislature and executive have got their defined powers which they exercise in their own jurisdiction. CBSE Class 10 Civics Chapter 1 notes will give you an insight as to how the system of power-sharing works. CBSE Class 10 Civics Chapter 1 notes will help us understand how each organ is accountable to each other while they are still functioning in a different jurisdiction. The NCERT Solutions for Class 10 Social Science Civics Chapter 1 is already available in PDF form for students to refer for this chapter. 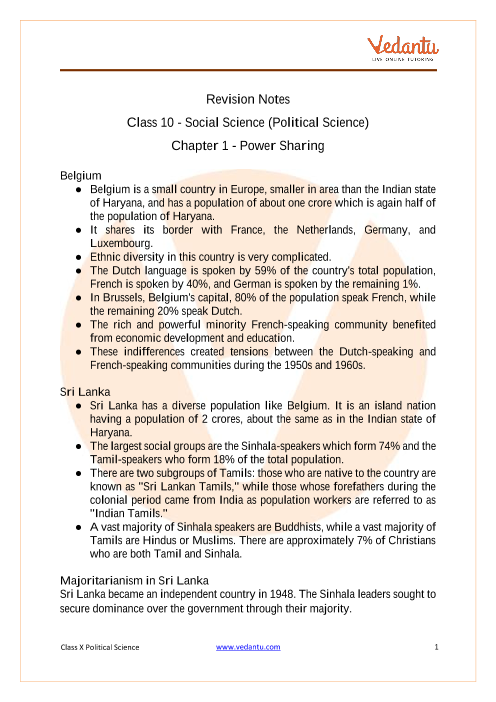 Sri Lanka became an independent country in 1948. The Sinhala leaders sought to secure dominance over the government through their majority.

The government of Belgium handled the community difference very well. Belgian leaders amended their constitution four times between 1970 and 1993, resulting in a new model for government administration. The Belgian model includes the following elements:

Why is Power Sharing Desirable?

Power-sharing is beneficial because it reduces the likelihood of conflict between social groups. Another reason is that a democratic rule implies sharing power with those who are affected by it and who must live with its consequences. People have the right to be consulted about how they will be governed.

1. What do you mean by a system of ‘checks and balances?

Ans: When power is distributed horizontally, it is shared among the various components of government, such as the executive, legislature, and judiciary. Each organ validates the other organs. As a result, there seems to be a balance of power among various institutions. This is known as a 'checks and balances system. It ensures that none of the organs have unrestricted power.

Ans: Majoritarianism is the belief that the majority community should be able to rule a country in whatever way it deems appropriate, regardless of the wishes and needs of the minority.

3. How is power-sharing the true spirit of democracy?

Ans: Power-sharing embodies the spirit of democracy because it is one of the fundamental principles underlying the concept of democratic rule.

4. What do you mean by a vertical division of power?

Ans: A vertical division of power refers to the sharing of power between different levels of government, such as the Central and State governments. Power is divided between a higher and lower level of government in this system.

5. Which community supremacy was witnessed in post-independence Sri Lanka?

Ans: The dominant Sinhala community and the immigrant population of Sri Lanka experienced supremacy after the country's independence in 1948. Through government favors, the Sinhalese were able to influence the government and spread their language and culture while demonizing the Tamil language and culture. They reduced government employment and higher education opportunities for Tamils.

6. State the three consequences of the majoritarian policies adopted by the post-independence Sri Lankan government.

Ans: Three consequences of the majoritarian policies adopted by the Sri Lankan Government are:

7. What are the principles of a good democracy?

Class 10 SST Civics Chapter 1 - Power Sharing is available for the students in PDF form so that you can access it easily. Download the Class 10 Social Science Political Science Chapter 1 in PDF form and study anywhere on your device. This chapter discusses one of the fundamentals of the Indian political system. It is essential from the viewpoint of board examination. Students will score higher by referring to CBSE Solutions for Class 10 SST Civics Chapter 1 to learn the answering pattern for the chapter.

CBSE notes Class 10 Political Science Chapter 1 starts with the story of Belgium and Sri Lanka. Both stories teach us how power-sharing takes place in two different countries and how it affects them.

Story of Belgium and Sri Lanka

Belgium was a European country 59% of people were Dutch-speaking while 40% were french-speaking and the remaining 1% were's German in the 1950s and 1960s. Although the French were 40% of the population they were richer than the rest of the population and had control of the economy. This created a lot of tension and French domination in Belgium.

Sri Lanka is an island country near India. The major social groups in Sri Lanka after 1948 were Sinhala speakers which were 74% and the Tamil speakers 18%. Tamil speakers were also divided into Sri Lankan and Indian Tamils. The rest were other minor groups of the population.

In 1956, an Act was passed in Sri Lanka which recognised only Sinhala as the official language and the Tamil speakers felt ignored by the government. After this, there were many more preferential policies which gave Sinhalese people more leverage while getting government jobs or admission in universities.

Quite soon, many parties and political groups emerged, which launched a struggle for recognition of Tamil as one of the official languages of Sri Lanka. The Sri Lankan Government repeatedly denied the Tamil population on this, which created a communal conflict and turned into a civil war. The civil war resulted in losses to both the parties and setback the Sri Lankan economy. It also resulted in a significant population becoming refugees by escaping to other countries.

The Central Government in Belgium will have an equal number of Dutch and French-speaking ministers. Selected laws will require the consent of the majority of members from each linguistic group.

The State Governments Were Not Under the Central Government.

Brussels, the capital of Belgium had a different government which also had equal representation of both linguistic groups.

Apart from this, they had a community government which decided on all the matters regarding culture education and language-related issues.

Why is Power Sharing Desirable?

Power-sharing reduces conflict between social groups. It helps in preventing violence and political instability between various social groups in a country where the population is diverse such as India.

Power is also a part of the democratic process as it shares power with every stakeholder of the government. Power-sharing empowers the fact that people need to be consulted on the decisions that concern them.

Power-sharing can be considered as the spirit of democracy as power is not concentrated in the hands of few people. Moreover, the people in power are not only responsible for their decisions but they are also held accountable for it. Power-sharing also gives respect to each and every social group which is rarely seen in any other type of government except democracy.

There are different ways in which power-sharing takes place in various democracies:

Between Different Organs of the Government

Between Different Levels of Government

This refers to the system where the power is distributed among various levels of government such as the central and provincial government. This system is also known as federalism. India is a prime example of the federal system of government. In certain matters, the power-sharing is so exclusive that certain subjects are only exclusive to the union government or the state government.

In this, various weak social groups are represented in the legislatures or administration through various reservations. This gives the various social groups a voice and power which might not have been given in other types of government.

There are various political groups in the society like political parties, pressure groups and other Public Interest groups which have a significant influence over the decision making and law-making process in a democracy. Sometimes, political parties form an alliance and participate in direct power-sharing when they form a coalition government.

1. Describe How Power-Sharing is Good for Democracy.

In a democracy, it is the rule of the people which is further empowered by power-sharing. Various political groups such as pressure groups, public interest groups as well as political parties which are composed of common people or active citizens exercise significant influence in the political arena. They are heard by not only the civilians of the country but also by the government and influence various laws and policies.

2. Describe the Result of Communal Tensions in the Case of both Sri Lanka and Belgium.