Ashoka the great holds an important place in Indian history. His life has been followed by many, and students must learn about him to learn insights into life’s meaning. Class 6 Chapter 7 Ashoka, the emperor who gave up war, is a marvellous approach by the CBSE board to teach students about Ashoka the great. NCERT Class 6 History Chapter 7 notes have been prepared by eminent teachers, presenting Ashoka’s story concisely and insightfully. The depiction has a story-wise flow, which grabs the attention of the students throughout the notes. Moreover, the notes have several thoughtful, intriguing questions and activities at the end of the chapter, helping the student clear their concept and score high in the examination. The PDF version of the notes will allow the students to learn the chapter’s ideas conveniently. 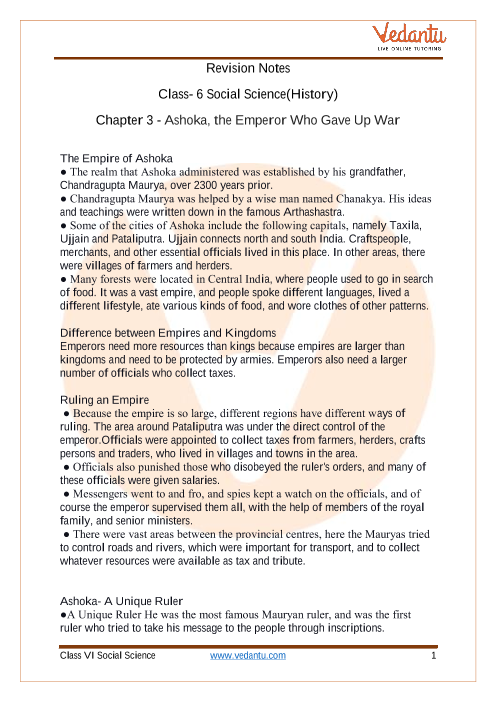 The Empire of Ashoka

Difference between Empires and Kingdoms

Emperors need more resources than kings because empires are larger than kingdoms and need to be protected by armies. Emperors also need a larger number of officials who collect taxes.

Class 6 History Chapter 7 Notes is a helpful note series that has helped the students in many examinations. The students can download the PDF version of the notes on their laptops, computer, tablets or android devices. They can now get the notes of History Class 6 Chapter 7 at their convenience, which will help them revise the night before the examination.

A Very Big Kingdom = An Empire

This section speaks about Emperor Ashoka’s dynasty. In this section, the students will learn about his family tree, the period when he ruled and his subordinates. Emperor Ashoka got the abe support of Chanakya, whose ideas were depicted in Arthashastra. The empire consisted of important historical cities like Taxila, Pataliputra, and Ujjain. This section also included details of the people’s occupation during that period. They have segregated the professions according to different regions of the empire. It also included details of the clothes, languages and food habits of these people.

How Are Empires Different From Kingdoms?

This small section speaks about the differences between an empire and a kingdom. In terms of size, an empire is much larger than a kingdom. Therefore, it needs to be ably supported by resources, protected by big armies, and maintained by many officials for different purposes like collecting taxes.

Since the size of an empire is huge, it needs to be controlled in parts. For example, Emperor Ashoka controlled the city of Pataliputra and the area around it. Several officials were appointed for tax collection, providing judgment and punishing the wrong-doers. The section also included information about spies having an eye on these officials. A provincial capital was set up to control other regions like Ujjain and Taxila. However, Emperor Ashoka maintained some control over these regions. These centres were also granted provision to make their local rules and customs.

This section considers the tribute concept, which is regarded as an offering from people willing or unwilling to give.

This portion of the notes of History Class 6 Chapter 7 details the uniqueness of Emperor Ashoka in his approaches. For example, he introduced the concept of inscriptions for sending messages to the people. He used Brahmi script, one of the mother languages of most Indian languages, to prepare these inscriptions in Prakrit.

The Kalinga war is the turning point of Emperor Ashoka’s life. The ancient name of the coasts of Orissa is Kalinga. Ashoka was previously considered a destructive, heartless human being who made other states suffer severely in battles. The Kalinga war is the outcome of such an attitude. However, Ashoka was horrified at the bloodshed, violence and pain that the war brought. Therefore, after the war, he gave up conquest, being the only king in the world’s history.

What was Ashoka’s Dhamma?

After the Kalinga war, Emperor Ashoka was a changed person. He introduced a new Dhamma, which is mainly based on services for others. It did not include any sacrifices or idol worshipping. His officials were called the dhamma mahamatta, whose job was to go places and preach about the ideas. He also ensured that his ideas spread to foreign lands like Greece, Egypt, Syria, and Sri Lanka.

Along with his preachings, he devoted his life to the services of other people. He dug wells, built roads and upgraded medical assistance for both humans and animals. This section speaks about Ashoka’s dhamma.

The key features of the class 6 history chapter 7 notes include:

1. Why does Emperor Ashoka hold an important place in Indian history?

Emperor Ashoka is considered as Ashoka, the greatest by all people in the world. His life is the ideal example of how a hard-hearted person can transform into someone who devotes his life to others. He has been an inspiration for many throughout decades, and students must learn life lessons from him. Moreover, this chapter is very important in terms of examination, and the students must learn about his life and contribution to society.

2. Why should a student study the NCERT Solutions for Chapter 7 Ashoka the emperor who gave up war?

The NCERT solutions are an important asset to learn about Emperor Ashoka in Chapter 7, social science. Students must learn and get inspired by the life and ideas of Emperor Ashoka. They will understand the reasons why there are still so many followers of him all over the world. The notes provide a concise and detailed solution, which will be attractive for the students. The students can score high marks if they study this pointwise solution set before the examination.

Ashoka was a valourous king of the Mauryan dynasty. He is deemed to be the first ruler who had conveyed his messages to his subjects in the form of inscriptions which were mostly in Prakrit and were written in the Brahmi script. He had fought in the war of Kalinga, which was the name of coastal Orissa. But the war had an immense effect on the king. He was horrified and traumatized by the destruction and the violence that the war had brought along with it. Owing to this, he had pledged never to participate in any kind of war in the future. This is the reason he had distanced himself from war.

4. What is Ashoka’s Dhamma?

Ashoka dhamma is a set of edicts that the Mauryan king had formulated in order to teach his subjects. These do not follow the teachings of the earlier kings who had suggested the worship of certain gods or had supported the ritual of sacrifice. Ashoka had felt that as the ruler of his people, he was a father figure to them and had the role and responsibility to impart and teach them about certain life values. This was the reason that the Ashoka Dhamma came into existence.

5. What gave rise to the Ashoka Dhamma?

Ashoka was troubled by various things that were happening around him. The first one was the conflict that would often arise because the members of his kingdom had followed different religions. Another thing that was prominent in his kingdom was the great number of animal sacrifices. There was all the mistreatment of the slaves and the servants.  Ashoka, as the king of his subjects, took it upon himself to solve these disputes. He believed it to be his responsibility to be able to create an Empire where everyone lived in peace without violence and bloodshed of any kind. To achieve this, he appointed under him officials whose duties were to visit from place to place and teach the people about dhamma. These officials were known as the Dhamma Mahamatta.

Ashoka is termed as the greatest ruler that has ever been known in the Mauryan dynasty. This empire was founded by Chandragupta Maurya, his grandfather. His kingdom was called an empire, because contrary to a kingdom, the empires require more resources, as empires are usually larger than the kingdoms.  Ashoka had ruled an empire that consisted of many cities. Because of the many areas of land that the empire covered, there was a need for many officials who would keep a check on all the people and collect taxes.

Yes, Chapter 7 of Class 6 History is extremely easy and interesting to learn. For this, students should devote adequate time to read this chapter. Without the knowledge of this chapter, students will not be able to understand what is being taught. This would make the concepts hard and boring for them. Therefore, students must read the chapter and highlight the important keywords.