A test cross is a genetic technique discovered by Gregor Mendel that entails mating an individual with all phenotypically recessive individuals, to ascertain the zygosity of the former by evaluating the proportions of offspring phenotypes. Zygosity can be homozygous or heterozygous. Heterozygous individuals have one dominant and one recessive allele.

As a result, Mendel crossed a tall plant from F2 with a dwarf plant to identify the genotype of a tall plant at F2. It is known as a test cross. Instead of self-pollination, a dominant phenotypic organism is mated with a recessive parent in a normal test cross. The offspring of such a hybrid is simply analysed to predict the genotype of the test organism.

Let’s assume that you were handed a tall pea plant with no knowledge of its parentage. Since tallness is a dominant feature in peas, your plant may be homozygous (TT) or heterozygous (Tt), but you'd have no idea. In this case, a test cross can be used to establish its genotype. 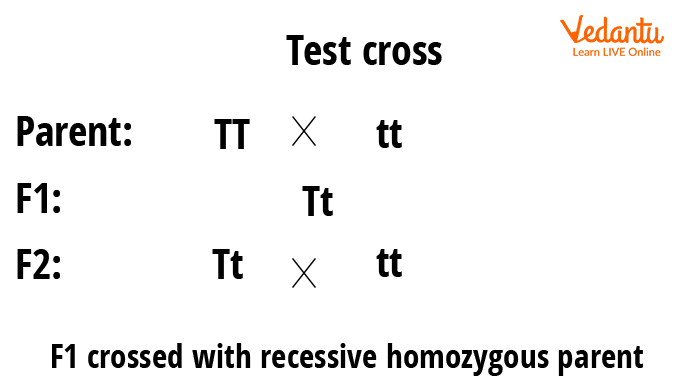 What is Homozygous and Heterozygous?

Mendel hypothesised that the allelic pair of genes for height in a pure breeding tall or dwarf pea variety are identical. TT and tt, Bateson and Saunders referred to this situation as “homozygous.” A hybrid is an individual who has two distinct alleles (Tt). This condition was termed heterozygous by Bateson and Saunders.

Individual phenotype, DD and Dd are tall, but dd is a dwarf. When both alleles are the same (DD or dd), the individual is called a homozygote; when the alleles are different (Dd), the words heterozygous and heterozygote are used.

The organism with an unknown genotype that expresses the dominant phenotype is crossed with a known homozygous recessive individual.

A monohybrid cross is a cross between two individuals who have homozygous genotypes for the opposing phenotype for a certain genetic characteristic. Geneticists utilise monohybrid crosses to study how homozygous children express heterozygous genes acquired from their parents.

Two lines are crossed to produce a hybrid in a back cross. The offspring are then selected and crossed with one of the parents. Back crosses are extremely beneficial in plant breeding because they allow breeders to hybridise a high-yielding variety with another variety to introduce the desired feature, then back cross to ensure the progeny have the same desirable qualities as the high-yielding variety. 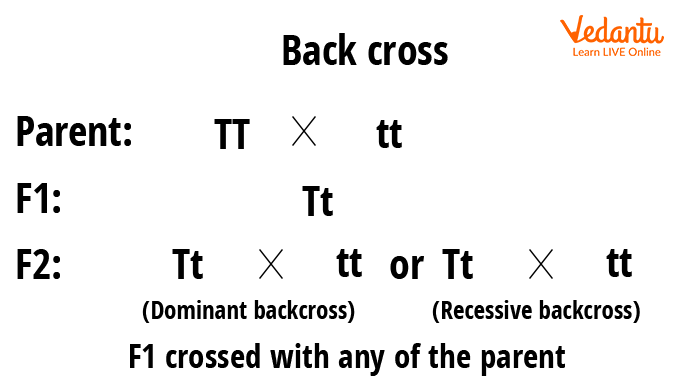 1. What is the significance of the test cross?

The significance of the test cross:

2. Explain the differences between monohybrid and dihybrid crosses.

3. What are the disadvantages of test cross?

The disadvantages of test cross are: