The principal metabolic mechanism involved in the elimination of nitrogenous wastes generated by the breakdown of protein and other nitrogen-containing molecules is called the urea cycle. In the mitochondria of liver cells, the urea cycle converts excess ammonia to urea. Urea is formed, enters the bloodstream, is filtered by the kidneys, and is eventually excreted in the urine.

The biochemical part of excretion is urea synthesis using the urea cycle, also known as the Ornithine Cycle. It is also known as the Kreb-Henseleit cycle and occurs in the liver. In this article, we will see the regulation and significance of this cycle.

What is Urea Cycle?

Citrulline is produced by ornithine transcarbamoylase from carbamoyl phosphate and ornithine. Ornithine is recycled and utilised in the urea cycle.

Arginosuccinase cleaves argininosuccinate to produce arginine and fumarate. Urea is a direct precursor of arginine.

Arginase is the last enzyme that cleaves arginine to produce urea and ornithine. The regenerated ornithine enters the mitochondria for reuse in the urea cycle. Both CO2 and Mn2+ are activated by arginase. 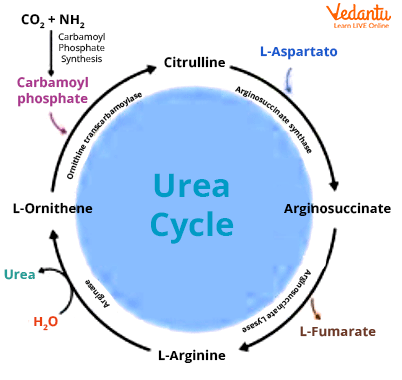 The first reaction, catalysed by Carbamoyl Phosphate Synthetase I (CPS I), is a rate-limiting or essential step in the production of urea. N-acetyl glutamate (NAG) activates CPS I allosterically. The rate of urea production in the liver is linked to N-acetyl-glutamate concentration. NAG levels rise when arginine levels rise. A protein-rich meal raises the amount of NAG in the liver, resulting in increased urea production.

The mitochondria include carbamoyl phosphate synthetase I and glutamate dehydrogenase. They collaborate in the creation of NH3 and its usage in the synthesis of carbamoyl phosphate. The remaining four urea cycle enzymes are primarily regulated by the concentration of their respective substrates.

The urea cycle is irreversible and requires 4 ATP to complete. The production of carbamoyl phosphate requires two ATPs. One ATP is converted to AMP and PPi to yield argininosuccinate, which is equivalent to two ATP. As a result, 4 ATP is actually consumed.

The table describes metabolic disorders related to each of the five urea cycle enzymes. All of the disorders always result in an increase in blood ammonia (hyperammonemia), which leads to toxicity. Another urea cycle byproducts accumulate as well, depending on the individual enzyme deficiency. Clinical signs of urea cycle enzyme deficiencies include vomiting, drowsiness, irritability, stiffness, and mental retardation.

Urea cycle is a series of metabolic reactions that occur in the liver to convert ammonia to urea. The urea cycle is made up of six enzymes that rid the body of nitrogen produced during amino acid metabolism. They break it down into urea, which is excreted in the urine. This article talks about the importance and regulation of the Urea Cycle. There are different disorders also related to the improper functioning of the enzymes of the urea cycle.

Terrestrial adaptation required the synthesis of less harmful nitrogenous wastes like urea and uric acid in order to conserve water. Since urea is 100,000 times less hazardous than ammonia, it may be tolerated at considerably higher concentrations. Ureotelism is the process through which urea is excreted. Ammonia generated by metabolism is converted to urea in these animals' livers and released into the bloodstream, where it is filtered and expelled by the kidneys. Ureotelic animals are mammals, numerous terrestrial amphibians, and marine fishes that mostly excrete urea.

2. What happens when the urea cycle goes wrong?

If the urea cycle fails, the level of ammonia in the blood rises, resulting in hyperammonemia. Ammonia has the ability to pass through the blood-brain barrier. If a child has a urea cycle disorder, their liver is unable to produce one of the enzymes required by the cycle. When their bodies are unable to remove nitrogen, ammonia forms and accumulates in their blood. It's toxic and can damage their brains or put them in a coma. If not treated promptly, it can be fatal.

3. Which enzyme is the pacemaker for the urea cycle?

Since it is the rate-limiting step, CPS I is essentially the urea cycle's pacemaker enzyme. CPS catalyses the synthesis of carbamoyl phosphate (CP) from ATP and bicarbonate, depending on the type of enzyme, using glutamine or ammonia as a nitrogen source. Thus, eukaryotes have three CPS isoforms that are used to generate CP for use in various metabolic pathways. Prokaryotes, on the other hand, have a single CPS, classified as Type II, for which glutamine is the sole nitrogen source.