Difference Between Endotoxins and Exotoxins

What is a Toxin?

A toxin is a chemical substance which damages an organism. A toxin may be as simple as an ion or atom which negatively interferes with a cell. A toxin can also be in the form of complex molecules such as the proteins found in snake venom. Still other atoms and chemicals emit radiation, which has toxic effects on an organism. The effects of toxins vary widely in different organisms, and with different toxins. The end result of the strongest toxins is death, due to the damage they cause across the different cells of an organism. Different toxins act in different ways to affect the cells they damage.

An exotoxin is a toxin discharged by bacteria. An exotoxin can harm the host by obliterating cells or upsetting typical cell digestion. They are exceptionally intense and can cause significant harm to the host. Exotoxins might be discharged, or, like endotoxins, might be delivered during lysis of the phone. Gram-negative microorganisms might emit external layer vesicles containing lipopolysaccharide endotoxin and some destructiveness proteins in the bouncing film alongside a few different toxins as intra-vesicular items, hence adding a formerly unexpected aspect to the notable eukaryote cycle of film vesicle dealing, which is very dynamic at the host-microbe interface. 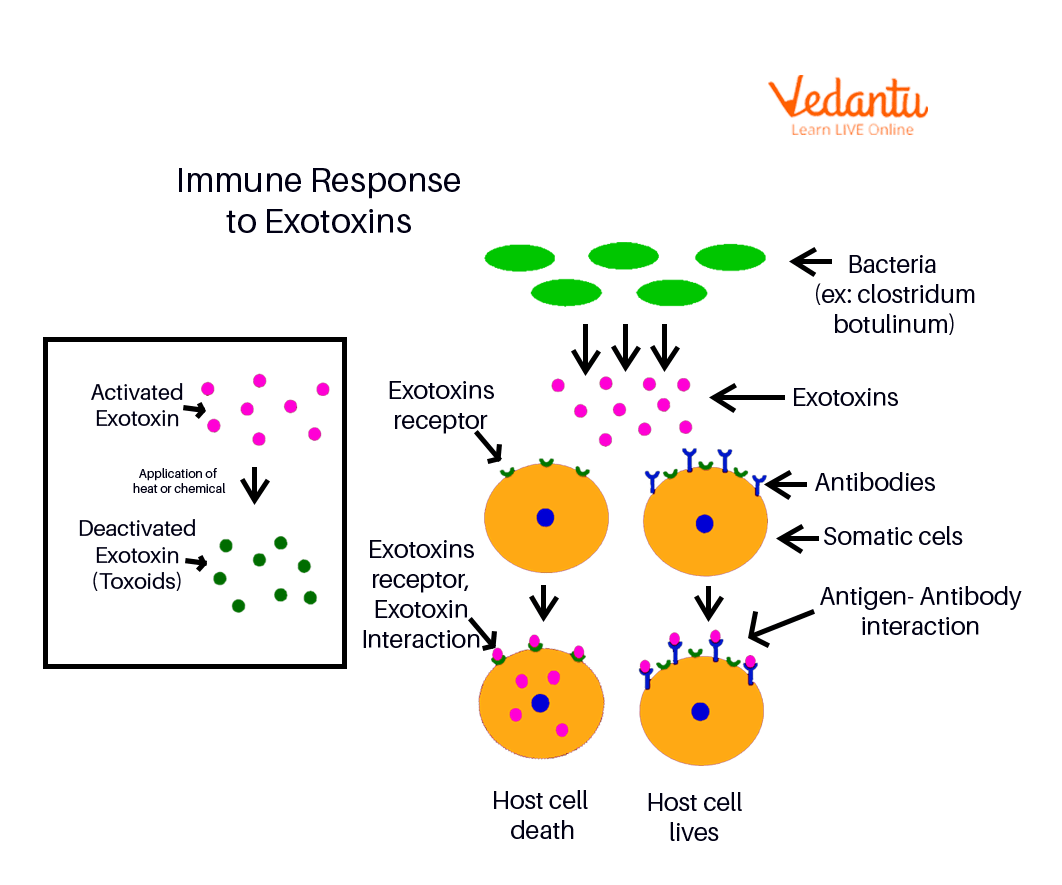 Immune Response Due to Exotoxins

This figure shows that exotoxins are discharged by bacterial cells, Clostridium botulinum for instance, and are harmful to substantial cells. Substantial cells have antibodies on the cell wall to target exotoxins and tie to them, forestalling the intrusion of physical cells. The limiting of the exotoxin and immuniser structures an antigen-counter acting agent association and the exotoxins are focused on for obliteration by the resistant framework. If this cooperation doesn't occur, the exotoxins tied to the exotoxin receptors that are on the cell surface cause the demise of the host cell by hindering protein amalgamation. This figure additionally demonstrates the way that the utilisation of intensity or synthetic substances to exotoxins can bring about the deactivation of exotoxins. The deactivated exotoxins are called pathogens and they are not harmful to physical cells.

What is the Chemical Nature of Exotoxin?

Endotoxins are Lipopolysaccharide-protein buildings (LPS), which are delivered at the hour of cell passing of microscopic organisms. It is week after week safe, and heat stable. Exotoxins are proteins delivered by a couple of types of microorganisms. It is antigenic and warms imbalanced.

There are three types of Exotoxins

1. A-B toxin: A-B toxins are the polypeptides made out of section A and part B. Section An is a functioning enzymatic part participating in modifying the elements of host cells through the hindrance of protein combination. Part B is a limiting part that intervenes in the connection of the toxin to the receptors of host cells. Microscopic organisms that produce exotoxins: Clostridium tetani, Clostridium diphtheriae, Vibrio cholerae, Staphylococcus aureus.

Target cells: Different sorts of cells all through the body.

Instruments of These Kinds of Exotoxins: Different toxins show various systems of activities.

Not Many of Them are as Beneath: Tetanospasmin represses the arrival of inhibitory synapses.

Diphtheria toxins cause ADP ribosylation of EF-2 bringing about hindrance of the protein blend.

Enterotoxin causes an emission of a lot of liquids and electrolytes that outcome in loose bowels.

Exfoliatin is a protease that separates desmoglein protein in desmosomes of skins causing singed skin conditions.

2. Layer upsetting Toxins: Among three sorts of exotoxins, film disturbing toxins are the toxins that prompt harm to cells by separating the construction of their plasma layers or by framing protein channels or upsetting the phospholipids. Microbes that produce exotoxins: Staphylococcus aureus, Listeria monocytogenes, Clostridium perfringens, Clostridium difficile.

Not Many of Them are as Underneath: Leukocidins and Hemolysins obliterate their objective cells (leukocytes and erythrocytes separately) by framing protein diverts in the plasma layer of their objective cells. The alpha-toxin, for example, lecithinase causes lysis of cell films by separating lecithin into phosphorylcholine and diglyceride. Phospholipase eliminates polar head bunches from phospholipids. Cytotoxin obliterates monstrous red platelets (hemolysis) and annihilates the cell cytoskeleton. Enterotoxin causes the arrival of liquids and electrolytes bringing about the looseness of the bowels.

3. Superantigens: Superantigens are the antigens that invigorate the development of a lot of T cells and animate these T cells to deliver a lot of cytokines. Microscopic organisms that produce exotoxins (superantigens): Streptococcus pyogenes, Staphylococcus aureus.

Not Many of Them are as Underneath: Both streptococcal pyrogenic exotoxin and toxins shock disorder toxin cause T cell stimulation and the ­release of cytokines (IL-1, IL-2, TNF), conceivable improvement of LPS exercises. Delivered cytokines animate intestinal sensory systems to enact the spewing focus in the mind. Enterotoxin causes an emission of liquids and electrolytes that results in looseness of the bowels. The toxin causes the discharge of fluids and electrolytes from vessels that diminishes blood volume and brings down circulatory strain.

Upon disease with a bacterial microbe, the body starts both intrinsic and versatile insusceptible reactions with a definitive objective to dispose of the intruder and to get back to homeostasis. Sometimes, nonetheless, the body might respond deficiently, bringing about blow-back to tissues if the reaction is too solid or an inability to destroy the microorganism if the reaction is excessively feeble or vaporous. Practically assorted toxins delivered by microorganisms during disease can contribute extensively to the results of the insusceptible reaction.

Moreover, as of late, it has become clear that past their authoritative activities, bacterial toxins might start other cell reactions. For instance, other than prompting cytolysis, pore-shaping toxins may likewise actuate autophagy, pyroptosis, or enactment of the MAPK pathways, bringing about a change of the host insusceptible reaction to contamination and alteration of provocative reactions both locally and fundamentally.

Exotoxins can be single polypeptides or heteromeric protein edifices that follow up on various pieces of the cells. At the cell surface, they might embed into the film to prompt harm, tie to receptors to start their take-up, or work with associations with other cell types.

Receptor-based take-up permits the focusing of unmistakable cell types interestingly communicating the receptor. It is started by the limiting of heteromeric toxin edifices to cell surfaces and is finished by the movement of the effector proteins across the endosomal layer. Once in the cytosol, toxins associate with explicit eukaryotic objective proteins to cause post-translational adjustments of host proteins that frequently bring about the control of cell flagging fountains and fiery reactions.

As referenced, endotoxins comprise a polysaccharide connected to lipid A (a lipid moiety). Here, lipid An is liable for the harmful impacts of the compound.A portion of the side effects related to endotoxins include: 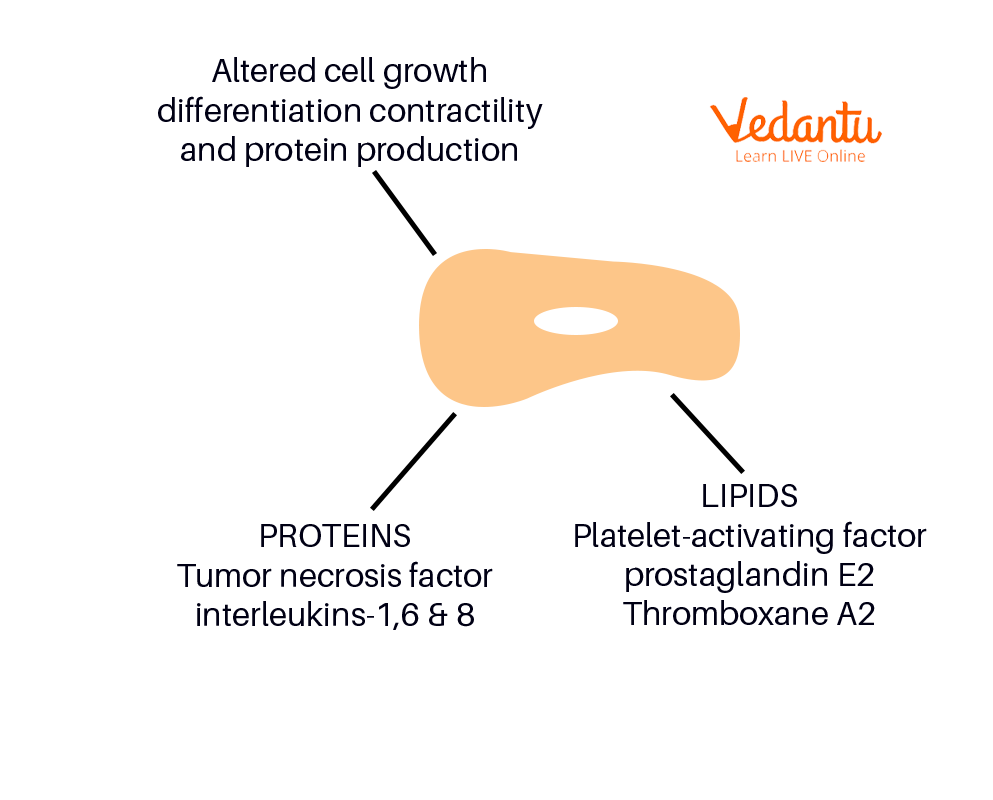 The term endotoxin is by and large used to allude to pyrogens created by Gram-negative microbes. In bacteriology, this mind-boggling compound is otherwise called lipopolysaccharide and can be found on the external layers of microorganisms like Escherichia coli, Salmonella, Shigella, Vibrio cholerae, and Haemophilus influenzae.

What is the Chemical Nature of Endotoxin?

Desulfovibrio desulfuricans anaerobes are constituents of human nutritious plot microflora. There are ideas that they partake in the pathogenesis of periodontitis and a few gastrointestinal fiery problems, like ulcerative colitis or Crohn's sickness. Endotoxin is one of the Gram-negative microbes' cell parts that impact these microorganisms' pathogenicity. Endotoxin is a lipid-polysaccharide heteropolymer comprising three components: lipid A, centre oligosaccharide, and O-explicit polysaccharide, likewise called antigen-O.

Difference Between Endotoxin and Exotoxin

Ans: Major human diseases caused by exotoxins produced by anaerobes include botulisms, tetanus, foodborne illness caused by enterotoxin-producing Clostridium perfringens, and diarrhoea/colitis caused by toxigenic Clostridium difficile. Recently, enterotoxigenic Bacteroides fragilis (ETBF) has been recognised, which may be related to childhood diarrheal disease. Detection tests of botulinal neurotoxin are hardly performed at clinical laboratories since the most reliable means of detection and identification of botulinal toxin is by using mouse toxicity and neutralisation tests.

Ans: The endotoxin hypothesis of neurodegeneration is the hypothesis that endotoxin causes or contributes to neurodegeneration. Endotoxin is a lipopolysaccharide (LPS), constituting much of the outer membrane of gram-negative bacteria, present at high concentrations in gut, gums and skin and in other tissue during bacterial infection. Blood plasma levels of endotoxin are normally low, but are elevated during infections, gut inflammation, gum disease and neurodegenerative disease. Adding endotoxin at such levels to the blood of healthy humans induces systemic inflammation and brain microglial activation. Adding high levels of endotoxin to the blood or body of rodents induces microglial activation, priming and/or tolerance, memory deficits and loss of brain synapses and neurons.

FAQs on Difference Between Endotoxins and Exotoxins

1. Can exotoxins be destroyed by heat?

Most exotoxins can be annihilated by heat. They might apply their impact locally or produce foundational results. Notable exotoxins incorporate the botulinum poison created by Clostridium botulinum, the Corynebacterium diphtheriae exotoxin which is delivered during perilous side effects of diphtheria.

Exotoxins are helpless to antibodies delivered by the resistant framework, yet numerous exotoxins are harmful to the point that they might be deadly to the host before the invulnerable framework gets an opportunity to mount guards against it.

2. Where do Endotoxins Come From?

3. What is the Structure of endotoxin?

Endotoxin is a type of lipopolysaccharide (LPS), consisting of lipid A (usually 6 acyl chains attached to a phosphorylated disaccharide), attached to the ‘core’ (a short sugar chain with various modifications), which is attached to the O-antigen (a long linear chain of sugars of variable length). Endotoxin is a major component of the outer membrane of gram-negative bacteria, with lipid A in the membrane and the O-antigen constituting the outer-facing surface of the bacterium. Soluble endotoxin is released when bacteria are destroyed, but is also released physiologically as outer membrane vesicles.