Difference Between Active and Passive Transport

What is Active and Passive Transport - Types & its Importance

The main purpose of both the transport system is to transport molecules and ions across the cellular membrane. The external layer is made up of the phospholipid bilayers, which preserves the homeostasis condition of the cell and regulate the entry of the materials. Few particular proteins along with semi-permeable membrane support the entrance of the molecules. In simple words, Active and passive transport are the two key biological process which plays a vital role in supplying nutrients, water, oxygen, and other vital molecules to cells and also by eliminating waste products. Both active and passive transport works for a similar cause, but with a different action.

What is Active Transport?

Active transports are of two types:

2. Secondary Active transport:  In the secondary active transport, proteins present in cell-membrane uses the electromagnetic gradient to move across the membrane.

During primary active transport, the existence of molecules in the extracellular fluid that is necessary by the cell is recognized by the specific trans-membrane proteins on the cell membrane, which acts as pumps of transferring the molecules. These transmembrane proteins are run by ATP. The primary active transport is utmost obvious in the sodium/potassium pump (Na+/K+ ATPase), which regulate the resting potential of the cell. The energy-free by the hydrolysis of ATP is used to force three sodium ions out of the cell and two potassium ions into the cell. Here, sodium ions are shifted from a lower concentration of 11 mM to a higher concentration of 146 mM. Potassium ions are transferred from a 146 mM concentration inside the cell to a 4 mM concentration of the extracellular fluid. The proton/potassium pump (H+/K+ ATPase) is present in the lining of the stomach, preserving an acidic environment inside the stomach. Omeprazole is a type of proton/potassium pump inhibitor, reducing the acid reflux inside the stomach. During both oxidative phosphorylation and photophosphorylation of electron transport chain use the help of primary active transport to generate a reducing power as well. 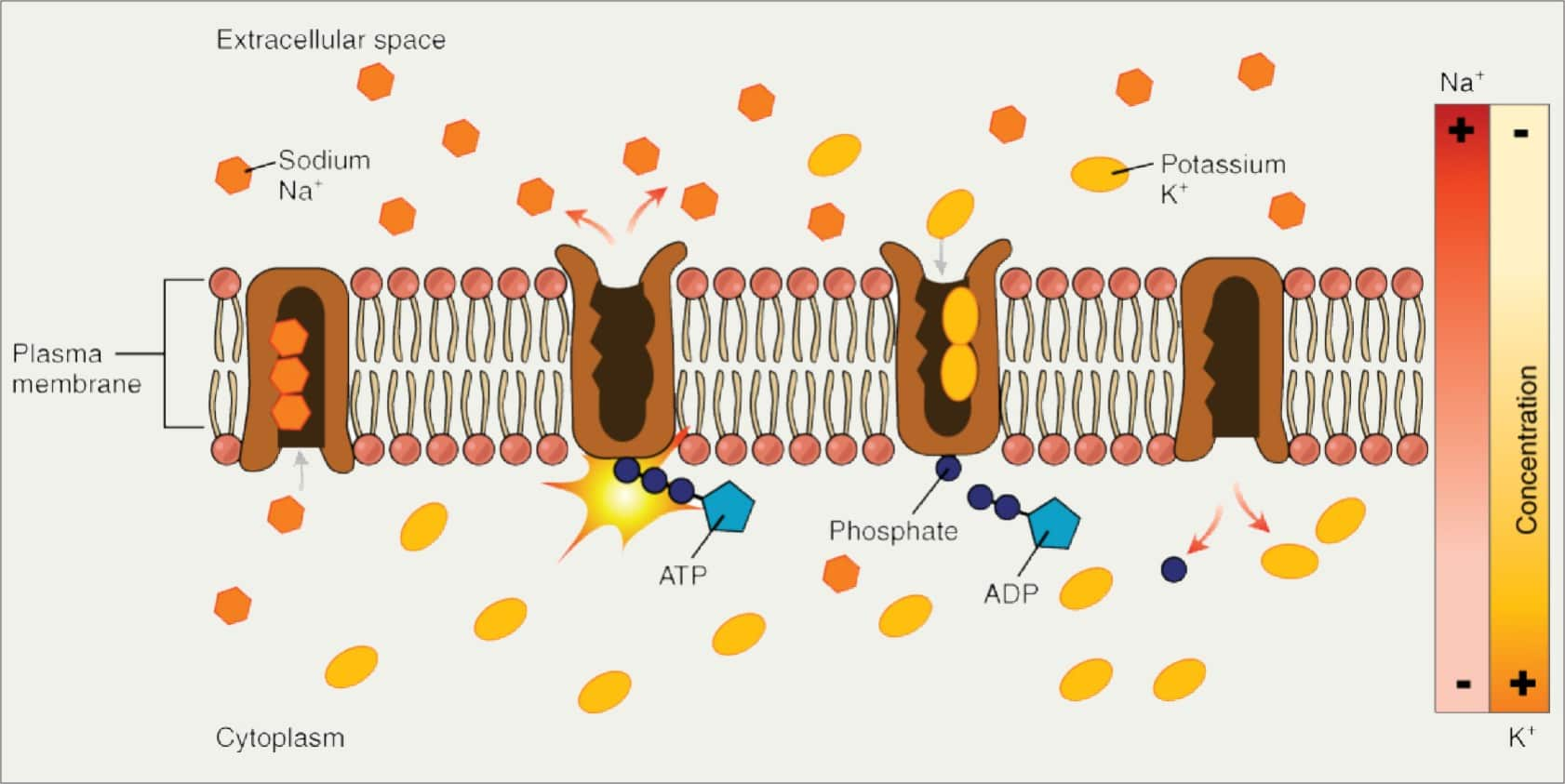 Secondary active transport is governed by an electrochemical gradient. In here, channels are made by pore-forming proteins (Pore are the small hole). A simultaneous movement of another molecule against the concentration gradient can be seen with the secondary active transport. Therefore, the channel proteins which are involved in the secondary active transport can be recognized as co-transporters. There are two kinds of co-transporters: symporters and antiporters. Specific ion and the solute are shifted in opposite directions by antiporters. Calcium/Sodium exchanger, which permits the restoration of calcium ion concentration in the cardiomyocyte after the action potential, is the most common example for antiporters co-transporter. Ions are transferred through the concentration gradient while the solute is transferred against the concentration gradient by symporters. Here, both molecules are shifted in the same direction across the cell membrane. SGLT2 is a symporter co-transporter that transports glucose into the cell along with the sodium ions. The role of symporter and antiporter is shown in the image below.

Importance of active transport: In eukaryotic cells, sugar, lipids, and amino acids want to enter the cell by protein pumps, which require active transport. These items either cannot diffuse or diffuse too slowly for existence. Active transport is essential for the entry of large, insoluble molecules into the cell.

What is Passive Transport?

Facilitated diffusion is the natural passive transportation of molecule or ions across the cell membrane through the specific-trans membrane of integral proteins. The molecules, which are big and insoluble needs a carrier molecule for their transportation through the plasma membrane. This process does not require any cellular energy or external energy.

The cardiovascular system (CVS) in the human body produces a hydrostatic pressure, which helps water and other soluble biochemical molecules or substance to travel across the cell membrane. This process is named as filtration because the cell membrane permits only substances which are soluble and could freely pass through the membrane’s pore.
Passive transport across the membrane is shown in the image below 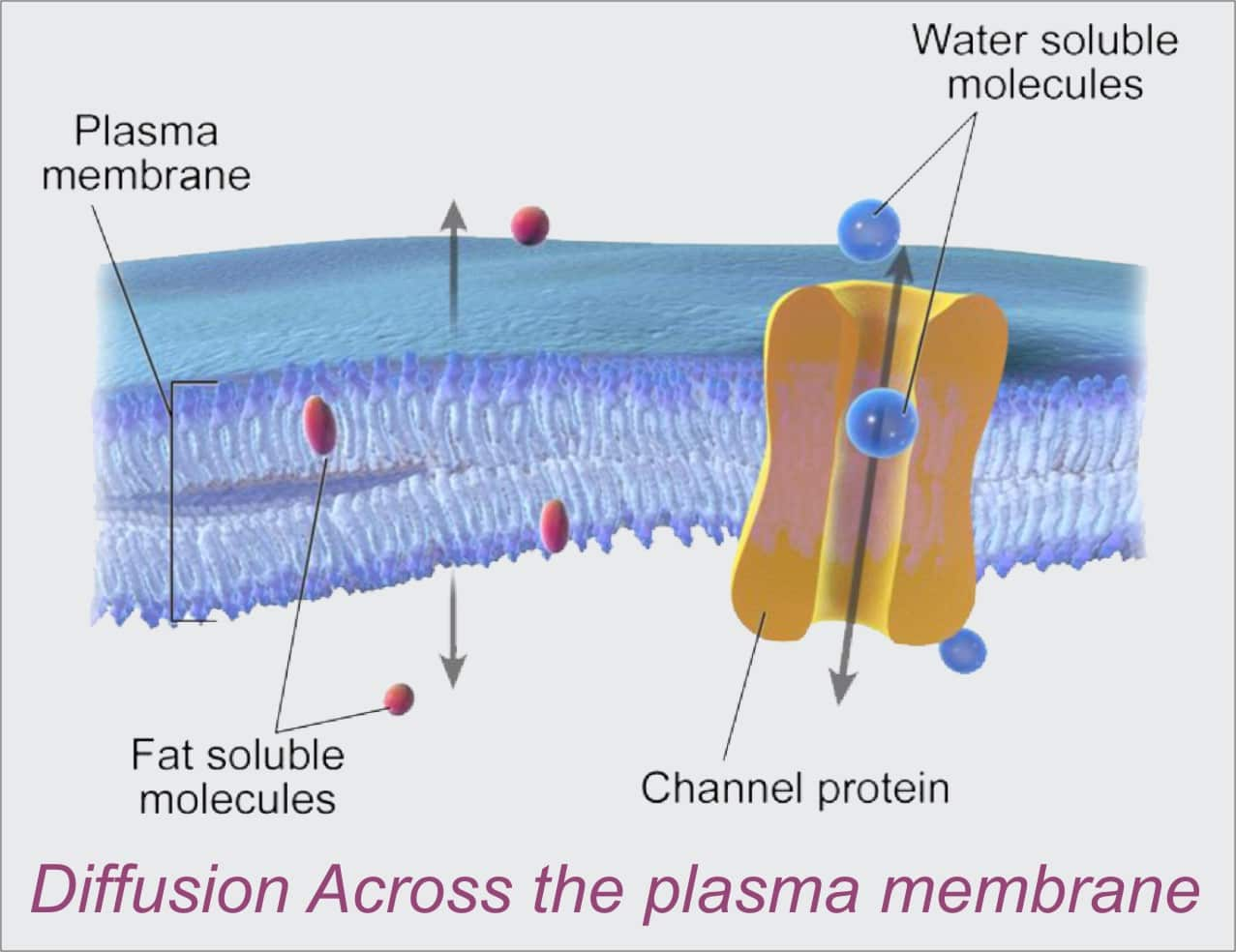 It maintains balance in the cell. Wastes like carbon dioxide, water, etc. are diffuse out and excreted; nutrients and oxygen diffuse in to be used by the cell. Passive transport also allows the maintenance of a delicate homeostasis condition between the cytosol and extracellular fluid.

Difference between Active and Passive Transport

Your FREE counselling session has been booked!

An academic counsellor will be calling you for the confirmation of your booking.