Macroeconomics Class 12 Chapter 2 mainly deals with one of the most significant topics of Macroeconomics namely National Income Accounting. Vedantu focuses on providing a picturesque description of Class 12 Macroeconomics Chapter 2 notes along with some other very significant topics. You will be introduced with several components of National Income Accounting such as Final goods, Intermediate goods, capital goods, investment etc. in Class 12 Economics Chapter 2 notes. Go through the notes PDF thoroughly if your goal is to secure good marks in Economics. 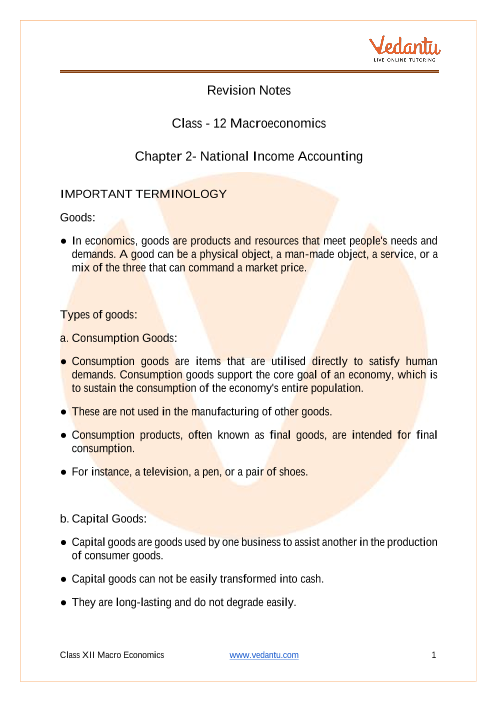 Normal Residents of a  Country

A person or entity that regularly dwells in a country and has its centre of economic interest in that country is referred to as a normal resident of that country.

Exceptions for Normal Residents of a country:

It is the factor income received by owners of factors of production for providing factor services in domestic territory throughout a fiscal year.

It is the total worth of all finished goods and services excluding depreciation and net indirect tax.

Thus, it is equivalent to the sum of all factor incomes (compensation of employees, rent, interest, profit, and mixed income of self-employed) created in the country's domestic area.

Q = Quantity of goods and services produced in an accounting year.

P = Prices of goods and services during the current accounting year.

Q = Quantity of goods and services produced during an accounting year.

P’ = Prices of goods and services prevailing during the base year.

GDP is classified into two categories-

Real gross domestic product (real GDP) is an inflation-adjusted estimate of the value of all goods and services generated by an economy each year. It is also known as "constant-price" or "inflation-corrected" or "GDP at constant prices".

It is exclusively affected by changes in physical output, not by changes in the price level. It's referred to as a true indication of economic advancement.

The products and services produced by all producing units in a country's domestic territory during an accounting year and valued at the current year's prices or current prices are referred to as nominal GDP or GDP at current prices.

Changes in both physical output and the price level have an impact on it. It is not regarded as a reliable indicator of economic advancement.

If GDP denotes nominal GDP and

The deflator is also expressed in percentage terms. In this scenario,

Some limitation of per capita real GDP as an indicator of economic welfare:

It refers to a firm's production activities that add value to raw materials (intermediate goods). Alternatively, value added is defined as an enterprise's contribution to the present flow of products and services. To put it another way, the term "value added" is used to describe a company's net contribution.

Value added of a firm = Value of Output– Value of intermediate goods used by the firm.

It is believed that the value of domestic income is equal to the total sum of expenditures on the purchase of final products and services produced throughout an accounting year within an economy.

I = investments made by businesses, and on capital goods,

G = government’s spending on goods and services provided to the public,

Methods to avoid the problem of double counting:

Private income is the estimated income of all factors and transfers to the private sector, both within and outside the country.

The term "personal income" refers to the sum of money received by all people or households in a certain country. Personal income comprises remuneration from a variety of sources, such as salaries, wages, and so on.

Final Goods: The first significant component that comes under Macroeconomics Class 12 Chapter 2 notes is the final goods. The commodities that have passed through all the phases of production and are ready for use by the final users are termed as final goods. Sometimes, final goods are segregated into two parts namely final consumer goods and final producer goods.

Consumption Goods: The goods which are directly used for the fulfilment of human wants are termed as consumer goods. These types of goods are not used for the purpose of production of other goods. Consumer goods are classified into four categories namely Durable Goods (TV, radio, car etc), Semi-Durable Consumer Goods (Clothes, Furniture etc), Non-Durable Consumer Goods (Bread) and Services (Doctor, Lawyer etc).

Investment: Investment is one of the most important components of National Income accounting as well as the Class 12 Macroeconomics Chapter 2. The procedure of formation of capital or a course of the increase in capital stock is termed as Investment. There are two types of investments namely Fixed Investment and Inventory Investment.

Gross Investment: According to Class 12 Economics Chapter 2 notes Macroeconomics Gross Investment is one of the most important terms as far as the National Income Accounting is concerned.

Net Investment: If you follow the notes of Macroeconomics Class 12 Chapter 2 minutely, you will find that Net Investment = Gross Investment – Depreciation (Consumption of fixed capital).

Stock: As per notes of Macroeconomics Class 12 Chapter 2, the quantity of any economic variable which is gauged at a specific point of time is termed as a stock.

Flow: Class 12 Economics Chapter 2 Macroeconomics tells that the quantity of any economic variable which is gauged during a span of time is termed as Flow.

Techniques of Measurement of National Income

As per Class 12 Macroeconomics Chapter 2 notes, there are three methods of measurement of National Income which are as follows:

There Are Three Components of Domestic Factor Income Which Are As Follows:

National Income: The main content of Macroeconomics Class 12 Chapter 2 is the National Income. National Income is referred to as the aggregate of factor incomes accruing to the residents residing in the boundary of a particular country.

GDP: Class 12 Economics Chapter 2 notes introduce the most important aspect of the present economic scenario which is called GDP. It is the aggregate of Compensation of employees, Operating Surplus, Mixed-Income, Consumption of Fixed Capital within the boundary of a particular country during the period of one year. There are two types of GDP namely Nominal GDP (GDP at current price) and Real GDP (GDP at constant price).

Why Should You Choose Vedantu?

When it comes to Macroeconomics Class 12 Chapter 2 notes, Vedantu is the best option for securing good marks in the exam. There are several reasons for this:

Q1. What are NNP at Market Price and NNP Factor Cost?

In the National Income Accounting Class 12 chapter, Net National Income (NNP) is a very important topic. NNP at Market Price refers to the market value of final commodities and services in the current accounting year including factor income from abroad without the depreciation. NNP at Factor Cost refers to the aggregate of factor incomes received by the residents of a country within the boundary in a period of one year.

Q2. What are the Externalities?

In the Macroeconomics Class 12 Chapter 2, externalities are the benefits a company or an individual causes to another for which they remain unpaid.

Q3. What is the importance of National Income Accounting?

The amount of economic activity taking place in a country is as important as the quality and quantity of goods that are either produced or imported into the country. This in turn affects the material well being of the citizens of that country. The Indian economy produces a large number of goods such as fruits, vegetables, locomotives, etc. National income accounting provides information on the economic activity of the country. The variations in numbers derived help policymakers formulate efficient policies for both the government and private sector.

Class 12 CBSE Economics Chapter 2 is one such chapter that can be mastered if done the right way. Understanding the various concepts that are introduced in each chapter is very important. Refer to different textbooks within your curriculum to gain different perspectives on the same topic. Vedantu has notes curated specifically for this purpose. You can use them to study topics that you aren't clear with. You can also use these notes as revision material before your examination.

Q5. Where can I find notes for Chapter 2 of CBSE Class 12 Macroeconomics?

Vedantu is the go-to website for every student when it comes to looking for answers regarding anything academic-related. There are a total of 6 chapters in Macroeconomics for Class 12 CBSE and all of them are extremely important from the examination point of view and complete revision notes for all the chapters is available on Vedantu app and website. Now, coming back to Chapter 2, Vedantu offers a comprehensive structure with revision notes and important questions.

Q6. Can I skip Chapter 2 in Grade 12  CBSE Macroeconomics?

All chapters are important when it comes to preparing for the examination. Skipping any chapter may lead to unnecessary loss of marks which could have been otherwise avoided if time management was stressed. However, Vedantu has notes prepared which are concise and easy to understand. These notes can help you grasp the concepts of the lesson in a shorter span of time. You can revisit these notes at your convenience. You can access the notes to Chapter 2 of Grade 12 Macroeconomics free of cost.

Q7. What is Economics?