What is an Iodoform Test?

The iodoform test is used to determine whether a given unknown chemical substance contains carbonyl compounds with an α-methyl group and the structural formula (R - CO - CH3) or alcohols with the formula R - CH (OH) - CH3. Iodine and aqueous sodium hydroxide (NaOH) solution or potassium iodide (KI) and sodium hypochlorite (NaClO) solution can also be used to conduct the test. In the iodoform test, the unknown is let to react with a mixture of excess iodine and sodium hydroxide.

Iodoform tests using l2 and NaOH are more commonly used. A pale yellow precipitate known as triiodomethane or iodoform is produced when iodine is added to the unknown compound that contains aldehydes or ketones in the presence of excess sodium hydroxide, and it has an "antiseptic" odour. Triiodomethane precipitation demonstrates the presence of aldehydes and ketones.

Acidic alpha hydrogen from methyl ketone is first removed by the hydroxide ion as a result a water molecule is eliminated. An enolate ion is created as a result of the previously mentioned step. The enolate ion then displaces the iodide ion from iodine. To produce R - CO - l3, this step is repeated twice as methyl ketone contains a total of 3 acidic alpha hydrogen. The carbonyl carbon now forms a bond with a hydroxide ion. As a result, the carbonyl group reforms, and the Cl3 anion is eliminated. Moreover, an R-COOH group is also formed. The basic ion and carboxylic acid group balance each other out. Iodoform precipitates as a result. The following diagram illustrates the reaction's mechanism: 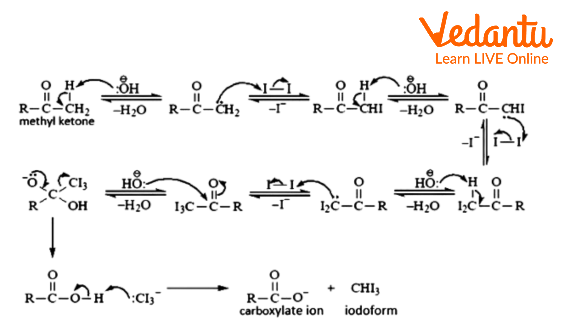 Iodoform is subsequently precipitated into a light yellow substance that has a distinctively "antiseptic" odour (positive test). It is verified that methyl ketone is present. The iodoform test is a fairly effective way to determine whether these methyl ketones or acetaldehyde are present in an unknown substance.

Some secondary alcohols that include at least one methyl group in the alpha position also exhibit the Iodoform reaction along with ethanol. Since ethanol is the only major alcohol to produce a positive iodoform test result, the iodoform test is useful in distinguishing ethanol from methanol.

The Iodoform test for ethanol involves three consecutive stages of reaction. Ethanol initially undergoes an oxidation reaction that produces CH3CHO. In step 2 hydroxide ion abstracts the alpha hydrogen from CH3CHOforming an enolate ion and water. Enolate ion now abstracts iodide from the iodine molecule. This step is repeated till all the 3 alpha hydrogen atoms originally present in CH3CHOis completely abstracted and replaced with iodine atoms to form Cl3CHO. In the third and final step, the hydroxide ion attacks the carbonyl carbon of Cl3CHOto form a formate ion and iodoform also known as triiodomethane which is a yellow colour precipitate thus confirming the presence of Ethanol. Ethanol hence gives a positive iodoform test. 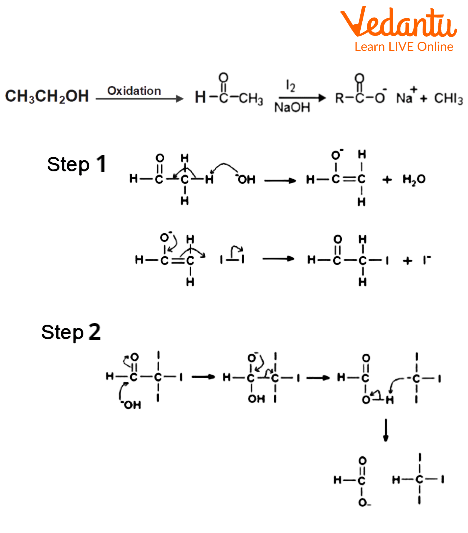 Methanol (CH3OH) does not answer the iodoform test because there are no alpha hydrogen atoms present in methanol. The same reason holds good for the unreactiveness of tertiary alcohols (alpha hydrogen atoms are absent) to the iodoform test. Hence this test can be used to distinguish between ethanol and methanol. 2-Propanol and 1-Propanol are also distinguished using this test.

The presence of an aldehyde or ketone with a methyl group as one of the groups directly attached to the carbonyl carbon is detected by the iodoform test. Methyl ketone is the name given to such a ketone. In the iodoform test, the unknown is let to react with a mixture of excess iodine and sodium hydroxide.

The following are detected by the iodoform reaction as positive: Methyl Ketones, Acetaldehyde, Ethanol, and Secondary alcohols containing the methyl group in the first position. Triiodomethane precipitate, a yellow substance, is produced successfully. When ethanol tests positive while methanol does not, it is useful to distinguish between the two substances. Tertiary alcohols are not tested with the Iodoform test.

1. The chemical molecule C3H6O has two functional isomers, A and B. While isomer A does not produce any iodoform precipitate when heated with NaOH and I2, isomer B does. Write the A and B formula down.

The Iodoform test can be used to distinguish between propan-2-one and pentan-3-one. While pentan-3-one does not respond, propan-2-one tests positive and results in the precipitation of pale yellow Iodoform.

3. How do you distinguish benzaldehyde and acetophenone?