A significant event caused due to Earth's natural processes that result in massive environmental degradation and loss of life and property is called a natural disaster. Some examples of natural disasters include firestorms, dust storms, floods, hurricanes, tornadoes, volcanic eruptions, earthquakes, tsunamis, storms, and other geologic processes. The planet has experienced countless natural disasters in its 4.54 billion-year history. Several mass extinction events have occurred, with catastrophic repercussions for various surviving species.

What is a Natural Disaster?

There are four broad types of natural disasters:

Natural Disasters Based on Changes in the Structure of Earth: 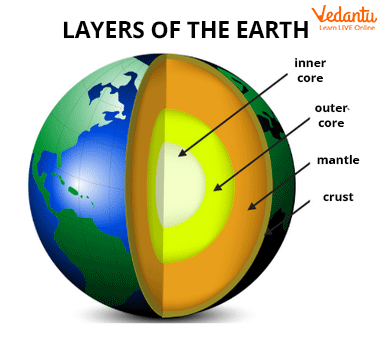 Image: Layers of the Earth

This article gives insight into natural disasters, their causes, and their effects. Earthquakes, floods, landslides, and other natural disasters can be identified from natural disaster charts use at various levels of documentation. When combined with economic, environmental, and social elements, however, the destruction is magnified or lessened. Since these disasters can have a great negative impact on the environment, we have to take preventive measures to lessen their impact.

1. How can we prevent and control these natural calamities?

To prevent these disasters, the best we can do is to put an end to practices that are harmful to our environment and lead to environmental deterioration, while simultaneously ensuring that we are prepared for a disaster through our disaster management plan. Prior to an epidemic outbreak, it is also necessary to properly dispose of dead animals and human bodies. Pollution should be avoided in our surroundings. We should stop destroying the environment by burning plastics or by chopping down trees. The after-effects of disasters are the primary risk factors for increased transmission of infectious diseases.

2. Can you list some major disasters that have occurred in India?

Disasters that have occurred in India are:

3. What are things to avoid during Natural Disasters?

Things to be avoided during Natural disasters are

Take these precautions to protect yourself from the devastating effects of natural disasters. A disaster, on the other hand, causes property or livestock loss. Hence, it is recommended that one must have some insurance policy to manage the loss.