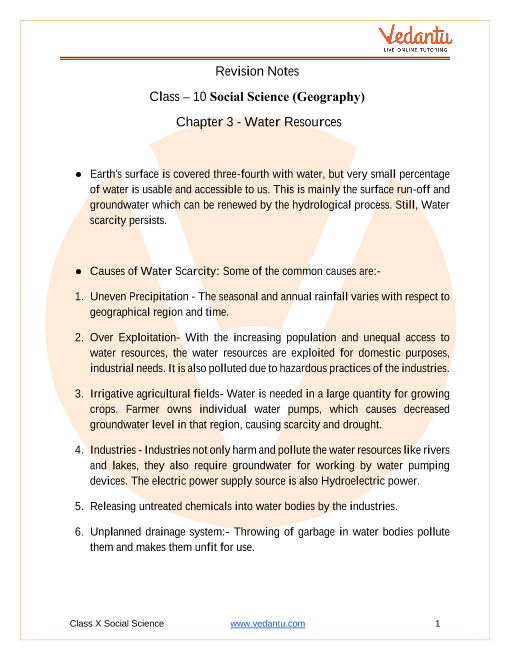 Dams are a hydraulic structures built to store water for future use. They act as reservoir. They become barrier and restrict the flow of water which can be later used for purposes such as irrigation, domestic use, industrial use, aquaculture, etc.

Jawaharlal Nehru claimed dams to be "Temples of Modern India '' as they would help in activites like agriculture, development of village economy, blooming of industries, and growth of the urban economy.

Rainwater harvesting is done according to the region and its climatic conditions. It is done in India since ancient times.

The main points covered in this chapter are:

Three fourth of the earth is covered with water, but only 2.5 per cent out of the total water volume exists as freshwater. The rest 96.5 per cent is salt water from the ocean. More than 70 per cent of the freshwater source exists as glaciers in Antarctica and high altitude mountain regions of the world. In the world, there is only 30 per cent fresh water which is stored as groundwater. Water resources are renewable, and it gets renewed within a short period. The hydrological cycle makes water a renewable source.

Water Scarcity and The Reasons Behind It

Water Scarcity is nothing but a shortage of water. It can happen naturally in the regions which are prone to drought and experience low rainfall.

Several other reasons may lead to water scarcity. These reasons include:

Water scarcity also affects the ecological cycle. It is high time to conserve and manage all the water resources.

From ancient times the water is conserved by constructing structures like dams which were used by building stones over water sources. Even now in India, there is a presence of dams in most of the rivers.

A dam is a barrier that is being built across flowing water that obstructs, directs or retards the water flow and by doing so creates a water reservoir, lake or impoundment. The term ‘dam’ refers to the water reservoir, not the whole structure. You can also take a look at the major dams in India map class 10 to have a better understanding.

Most of the dams are built to control floods, but some of them triggered floods. One of the significant movements to save a river is ‘Narmada Bachao Andolan’. It was a movement which was mobilised by an NGO and had protesters that include tribal people, farmers, human rights activists and environmentalists. The protest was against a dam called Sardar Sarovar Dam being built across the Narmada River in Gujarat. The movement focuses on rehabilitation and environmental issues.

Water is considered to be a renewable source. Rainfall is the main reason that the surface water and the groundwater get recharged within a short period due to three processes in the hydrological cycle. These processes are – Evaporation, Condensation and Precipitation. Overexploitation of water sources leads to water scarcity. Water scarcity is nothing but the shortage of water, and it may happen due to several reasons like water use in dry season agriculture, water pollution that turns water sources useless etcetera.

2. What are the advantages and disadvantages of multi-purpose river projects?

The advantages of multi-purpose river projects include Irrigation, Flood prevention, Hydrolytic electricity generation, Inland navigation, and Water supply for domestic and industrial purposes. The disadvantages of multi-purpose river projects are Aquatic flora and fauna get affected, The water flow gets affected, Land submerged in the surrounding areas, Land rehabilitation problem on a large scale and many ecological consequences.

3. What do you mean by water scarcity according to Chapter 3 Water Resources of Class 10 Geography?  What are its causes?

These solutions are available on Vedantu's official website(vedantu.com) and mobile app free of cost.

4. What are the uses of water resources according to Chapter 3 Water Resources of Class 10 Geography?

5. What is a dam according to Chapter 3 Water Resources of Class 10 Geography?

A dam is a structure that was earlier used to impound or store rainwater or river water for use in irrigation. But now, dams are used to produce Hydroelectricity, to store water for domestic and commercial purposes, for inland navigation, flood control, fish breeding, and recreational functions. Dams are now referred to as multipurpose projects owing to their multiple uses. Some famous dams in India are Bhakra Nangal Dam, the Hirakud Dam, and the Beas-Sutlej dam.

6. Why are multipurpose projects and large dams facing resistance according to Chapter 3 Water Resources of Class 10 Geography?

In recent times, the development of multipurpose projects and large dams are facing a lot of public scrutiny and resistance. That is because these big projects cause rehabilitation and resettlement on a very large scale. The people who are resettled are not properly compensated. The displacement of people and the natural fauna and flora is a big cost that is paid for these projects. Movements like Narmada Bachao Andolan and the Tehri Dam Andolan are some examples of resistance.

7. Which is the first state in India to make rainwater harvesting compulsory according to Chapter 3 Water Resources of Class 10 Geography?

The first state in the country to make harvesting of rainwater mandatory for all the houses across the state is Tamil Nadu. All the houses are supposed to have rooftop structures for rainwater harvesting. Legal provisions have been introduced for those who do not abide by this law. If you are seeking notes of this chapter for your preparation, you should get Vedantu’s CBSE Class 10 Social Science Geography Chapter 3 Notes. These are comprehensive and simple to use.