Class 3 EVS Chapter 11 namely From Here to There is divided into two parts. The chapter starts with a poem on a train taking children to various places. The second part of the chapter is about various kinds of transportation in the form of a conversation between the children. 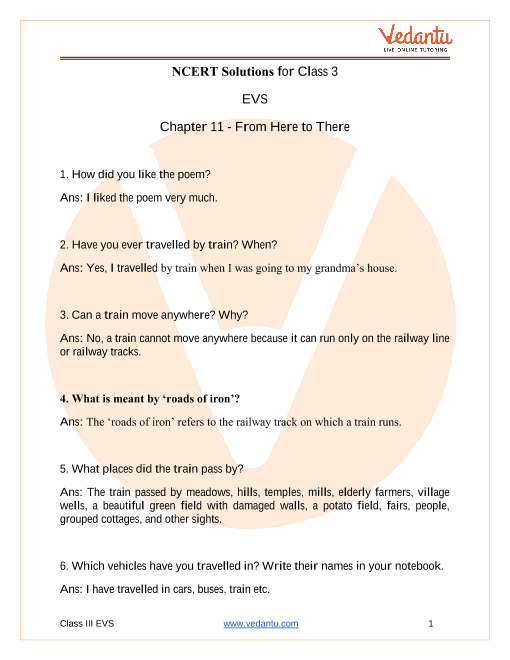 Ans: I liked the poem very much.

2. Have you ever travelled in a train? When?

Ans: Yes, I have travelled by train when I was going to my grandma’s house.

3. Can a train move anywhere? Why?

Ans: No, a train cannot move anywhere because it can run only on the railway line or railway tracks.

Ans: The ‘roads of iron’ refers to the railway track on which a train runs.

5. What places did the train pass by?

6. Which vehicles have you travelled in? Write their names in your notebook.

Ans: I have travelled in cars, buses, trains etc.

7. Which all vehicles did the children travel in?

Ans: The children travelled in a variety of vehicles, including a bus, a bicycle, a bullock cart, a metro train, a car, a horse, and a rickshaw.

8. How would you choose to go from your house to the places written below? Write

Across the sea – Ship

Across a River – Boat

9. How would you keep yourself safe while travelling?

Ans: Wearing seat belts while travelling in the car and if in other modes of transport we have to follow the traffic rules and regulations. Avoid putting hands and faces outside vehicle windows.

10. Write in front of each picture what the vehicle is used for. In the spaces provided,

draw the pictures of some other vehicles. Write their names and what they are used for. Are all these vehicles used for our travel?

11. Names of some vehicles are given in the centre of a wheel. Join these on one side to the number of wheels each vehicle has and on the other, join them to what is used to run them.

12. Find out from your elders – How did people travel fifty years ago? Were the

present means of travel available at that time also?

Ans: Fifty years ago, people used to go by bullock cart. No, modern modes of transportation such as aeroplanes, bicycles, and so on were not accessible at the time. Although ships, automobiles, and trains were available at the time, all of these modes of transportation were extremely expensive. As a result, the general public could not utilise them.

13. Can you imagine which vehicles people will use for travel twenty years from now? Ask your family members and friends and fill in the table. You can add more –

14. If anybody makes a ‘chhuk-chhuk’ sound you know at once that it is being made

for a train. From the sounds given below can you tell which vehicle it is? One example is given.

15. These are the sounds of single vehicles. How does it sound when many vehicles

run together on the road making different noises? Isn’t there a lot of noise?

a. Where have you heard the maximum noise?

Ans: When a large number of vehicles run on the road, they make a lot of noise. Yes, there is a great deal of commotion. This is one of the most common sources of noise pollution.

a. I have heard the maximum noise when we get stuck in the traffic.

b. No, I don’t like so much noise because it gives me headaches.

16. What all can you see in the picture?

Ans: I can see in the picture that a building is on the fire. A fire extinguisher vehicle is there by which firemen are trying to extinguish the fire. An ambulance is also there to take the patients to the nearest hospital. A police van is also there.

17. Which vehicles can you see in the picture?

We can see the following vehicles in the picture:

18. What are these vehicles usually used for?

2. An ambulance – To take the patients to the nearest hospitals.

3. A police van – To provide security to the people and to keep the situation under control.

19. Look at the boxes in the picture on the top. Draw them in the correct sequence in the bottom boxes and colour. What did you get? Write its name.

After rearranging the boxes, we get the image of an elephant.

The first part of NCERT Solutions for Class 3 EVS – Chapter 11 is an extract taken from the Hindi poem ‘Railgadi’ by Harendranath Chattopadhyay. The poet asks the children to board the train and take their seats respectively. The children then blow the whistle and the train starts moving. The train moves on rails and it stops at all stations. The train stops at the red signal and starts moving when the signal turns green. It moves across the meadows, over the hills, temple, mills, and the farmers working on the fields. The train goes through the village where the children see wells and lush green fields with broken walls and a potato field.

The train engine makes sounds like Chhuk Chhuk while moving and whenever it crosses the stations they ask the train to stop. The train also passes through smoky clouds and children can see the fairs crowded with people, horse riders and clustered huts in the villages. There are flocks of birds flying in the sky. The train moves by the bridges and the paths, dhobi ghats, small tea shops and small puddles are seen everywhere until it stops at the next station.

The first child says that she went to her uncle’s house in Delhi. She always travelled on a bus from the railway station to her uncle’s house but this time she went by the metro rail that runs through an underground tunnel. It was a fun ride for her because it was her first time and she could not figure out that above the tunnel, the cars were running on the road.

The second child says that he went for his aunt’s wedding. He enjoyed it as he met many of his relatives. He had a good time eating and drinking. His brother came on an aeroplane to attend the wedding. He reached in one day by aeroplane even though he lived far away. His aunt was looking very beautiful and she went in a palanquin.

The third child says that she went to her grandmother’s house in Kerala. Every time from the railway station, she either took a bus or a taxi but this time she went on a boat. The boat ride was a lot of fun for her.

The fourth child went to Shimla during his vacation. He went by bus that moved on the steep narrow roads with sharp curves on high mountains. He walked long distances in Shimla and whenever his grandmother got tired, they made her take a horse ride but he enjoyed walking.

The sixth child says that he went to his uncle’s house who lives in a village. From railway transportation, there is no bus running to the village so he has to take a bullock cart. He enjoyed the ride in the bullock cart because he loves the sound of the bell tied around the neck of the bulls and he also got to see the lush green fields on the way to the village.

1. What are the Different Kinds of Transportation Mentioned in the Chapter?

2. In the First Part, What do the Children see From the Train?

3. Name Some Modes of Transportation that Provide Services to People.

The transport modes that are used for providing services to people are mail van, ambulance, pushcart, rickshaw, bus and autos.

4. How will the Reference to NCERT Solutions for Class 3 EVS help you?

The reference to NCERT Solutions for Class 3 EVS will help you in understanding the different kinds of transportation that we use in our life. With this reference, you will be able to revise for your exams and all the answers to the questions are explained very well in this.

5. What are the advantages of different kinds of transports used?

6. What are the types of vehicles and how do they move?

7. How many questions are there in Chapter 11 EVS Class 3?

In the NCERT book in Chapter 11 EVS Class 3 there are 19 questions in total. The solution to these questions is given in the right format and they sufficiently answer the questions. The questions are interactive and at the same time they facilitate knowledge as they contain different keywords that the chapter is based upon. For the NCERT Solutions of these questions visit the page NCERT Solutions Class 3 EVS Chapter 11 on official website of the Vedantu or download the Vedantu app and download the PDFs of solutions at free of cost.

8. How did the sixth child reach his uncle’s house in the village?

According to the sixth child, he went to his uncle's house in the village. There is no bus service from the railway station to the village, so he has to rely on a bullock cart. He appreciated the bullock cart ride because he enjoys the ring of the bell on the bulls' necks, and he also got to see the lush green fields on the route to the village.

9. How are NCERT Solutions helpful from an examination point of view?

NCERT is the most prime book and all the teachers go by it. Usually, while framing the questions in examinations, the NCERT is taken as a reference and all the questions revolve around the same concepts more or less. The key to scoring good marks in exams is to strictly abide by the NCERT and practice all its questions. You must also revise all the main concepts regularly to ensure maximum marks.