What is National Debt?

The national debt has long been a contention in US domestic affairs. Given the amount of fiscal stimulus pushed into the US economy in recent years, it is easy to see why many people are paying careful attention to this topic. Unfortunately, how the debt amount is communicated to the general public is frequently opaque. The United States' national debt measures how much the government owes its creditors. Since the government virtually always spends more than it receives in taxes and other revenue, the national debt continues to climb.

Most of the country's debt is issued as treasury or government bonds. Some believe excessive government debt levels will influence economic stability, with repercussions for currency strength in trade, economic growth, and unemployment. Others argue that the national debt is manageable and that citizens should stop worrying. A country's central government's entire outstanding debt (bonds and other securities) is represented by public debt, often known as government debt. It's typically expressed as a proportion of GDP (GDP). While internal debt shows the government's responsibilities to domestic lenders, external debt shows its commitments to lenders outside the nation. A government's public debt is an important source of funds for funding public expenditures and closing budgetary shortfalls. The public debt ratio to GDP is frequently used to gauge a government's capacity to pay off future obligations.

What is Government Debt?

The gross government debt (also known as public debt or sovereign debt) of a country is the financial liabilities of the government sector. Government debt changes throughout time reflect mostly borrowing from previous government deficits. A government incurs a deficit when its expenditures surpass its revenues. Government debt may be owed to both domestic and foreign populations. If money is due to foreign people, it is included in the country's external debt.

In 2020, the global value of government debt was USD 87.4 trillion, or 99% of gross domestic output (GDP). Government debt accounted for about 40% of total debt (including corporate and family debt), the largest proportion since the 1960s. The surge in government debt since 2007 is mostly due to the 2007-2008 global financial crisis and the COVID-19 pandemic.

An Overview of US Debt

Since this nation's economic foundation, debt has been a feature of its operations. The national debt did, however, dramatically increase under the administration of President Ronald Reagan, and following administrations have maintained this increasing trend. The U.S. has only temporarily experienced a major decline in debt levels during the height of the economic markets in the late 1990s.

From a public policy perspective, the public normally accepts the issuing of debt as long as the revenues are utilised to boost economic growth to ensure the nation's long-term prosperity. However, the use of debt suffers greatly when money is obtained only for public consumption, such as when Medicare, Social Security, and Medicaid funds are used. Current and future generations benefit when debt is utilised to finance economic growth. Debt used to finance spending, however, only benefits the current generation. 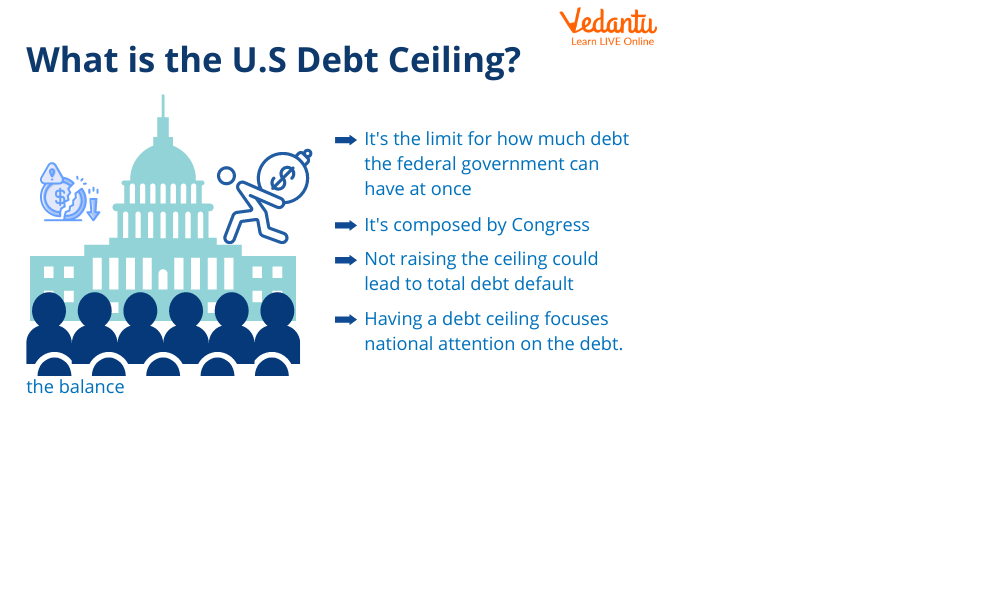 Analysis of the National Debt

Debt must be quantified accurately to communicate the long-term impact it poses since it is so essential to economic growth. Unfortunately, comparing the nation's national debt to its gross domestic product (GDP) is not the most effective method. Here are three reasons why this method of determining debt should not be used.

Paying Off the National Debt

Although there is a correlation between the two, the national debt must be paid back through tax revenue, not GDP. Using a method that focuses on the national debt per capita basis provides a far better picture of the country's debt situation.

Comparing the national debt to GDP is analogous to comparing one's debt to the value of the goods or services produced by one's employer in a given year. This is not how one would create their budget or how the federal government should analyse its budgetary operations.

The National Debt Has an Impact on Everyone

Given that the national debt has lately expanded faster than the American population, it is reasonable to question how this expanding debt impacts ordinary people. While it may not be clear, national debt levels have at least five direct consequences for people.

The national debt is one of the most serious public policy challenges. When handled correctly, debt may be used to promote a country's long-term growth and prosperity. However, the national debt must be evaluated appropriately, for example, by comparing the amount of interest paid to other public expenses or by comparing debt levels per capita basis.

1. How can the nation's debt be eliminated?

There are several ways to lower the national debt in the United States that go beyond merely raising taxes and decreasing discretionary spending. One of the most contentious would be opening the country's borders to immigrants, boosting business and consumption. Many people advocate raising the Social Security retirement age. A national sales tax, similar to those in Canada and Japan, would be beneficial. Getting the US government's debt under control is a Herculean effort that might take decades. In addition to apparent methods such as raising taxes and cutting spending.

2. Which country owes the most?

Japan, with a population of 127,185,332, has the world's biggest national debt at 234.18% of GDP, followed by Greece at 181.78%. Japan's national debt is 1,028 trillion yen (USD 9.087 trillion). Following Japan's stock market collapse, the government bailed out banks and insurance firms by providing them with low-interest funding. After some time, banking institutions had to be merged and nationalised, and other fiscal stimulus programs were utilised to help restart the faltering economy.