Introduction to Keynesian Theory of Employment

This theory deals with all levels of employment that is full employment, widespread unemployment or intermediate level. Keynesian theory is a short-run theory. Keynes strongly believed in government intervention. He did not support the policy of Laissez Faire. In his theory of employment, money is important in determining employment.

British Economist John Maynard Keynes, during the 1930s, developed Keynesian Economics to understand the Great Depression. This Economics is a demand-side driven theory and is based on the belief that with the help of government intervention, a nation's economy can be stabilised. The main focus of this economics is centred around government intervention to manage aggregate demand to prevent situations like recession and depression. This theory believes that when aggregate demand is increased through government policy intervention, the performance of any economy can be optimised. Keynesian economics is based on the belief that aggregate demand and aggregate supply are governed by effective demand. Employment and income depend on effective demand.

Some of the features of Keynesian Economics are: 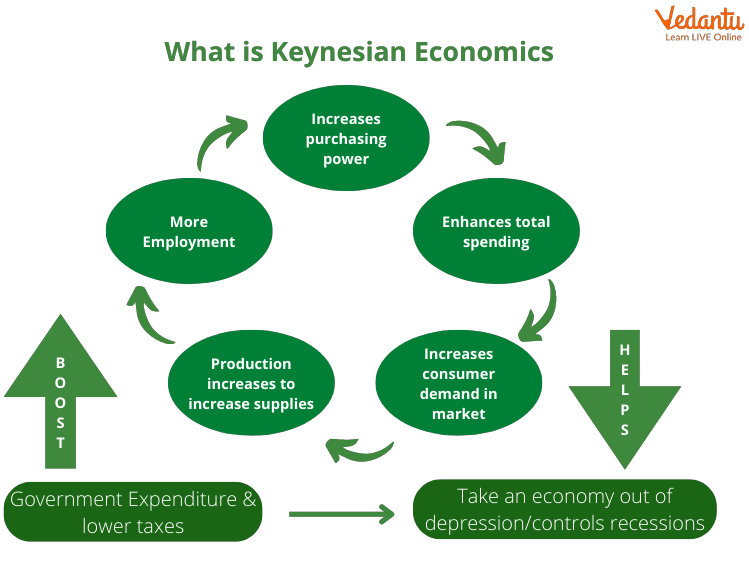 Keynes developed this theory to deal with the situation of the Great Depression. Keynesian Economists recommend fiscal and monetary policy as the primary tools to manage the economy and fight the menace of unemployment. Keynes's fiscal stimulus theory states that when the government spends money, it leads to an increase in business activity which generates more income and thus increases the GDP. The growth in GDP can be greater than the stimulus amount spent by the government initially. Keynesian Economists believe in saving less and spending more principle so that full employment and economic growth goes on.

Keynesian economics believes that through effective demand, the output of an economy can be increased, and all the problems of unemployment and economic depression can be managed. Effective demand encourages the producers to produce more thus the production gets a boost. With the increase in production, employment is also generated. This also results in the rise in inflation which is good for the economy and finally it helps in dealing with the situation of economic depression.

2. What are the features of the Keynesian Theory of Employment?

Keynesian Theory is very general as it deals with all employment levels. It defines unemployment and inflation. This theory is a short-run theory as it does not believe in the long term changes in the factors of production. It assumes that the capital goods, supply of labour, technology, and efficiency of labor remains the same while determining employment. This covers the short run of unemployment. This theory has important policy implications.

3. What are the differences between the Classical theory of employment and the Keynesian theory of Employment?