An Overview of the Green Economy

A field of economics called "green economics" aims to develop strategies that encourage peaceful relationships between people and the natural world. It covers various topics, including ways to interact with nature and production processes. Green economists may research the economics of alternative energy sources, materials, foods, or other industrial processes. Ecological and green economics are closely connected, but the latter differs in that the former takes a comprehensive approach and advocates for politically viable sustainable solutions. 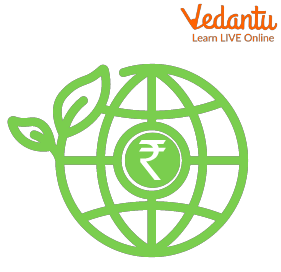 Importance of a Green Economy

There are numerous ways to define a green economy. According to the International Chamber of Commerce's (ICC) 2011 report, "Ten Conditions for a Transition Toward a Green Economy," a green economy is one "where economic growth and environmental responsibility work together in a mutually reinforcing manner while supporting progress and social development." Green economics has become more widely accepted through consumer-facing labels that describe a company's or product's level of sustainability. 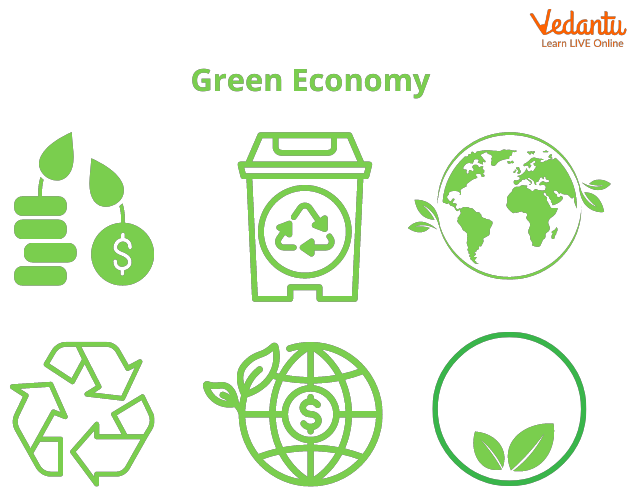 Substantial expansion of the organic farming industry, construction of dwellings made of plants, and use of bicycles as a mode of transportation, and electric vehicles are prime examples of this, as their batteries may contain components that were extracted from war-torn areas and delicate rainforests.

Many organisations, from feminists to green anarchists, have appropriated the phrase "green economics." It broadly includes any theory that sees the economy as a part of the context in which it is based. A "low carbon, resource-efficient, and socially inclusive" economy meets the criteria set forth by the United Nations Environment Programme (UNEP).

As a result, green economists typically adopt a broad and all-encompassing perspective when comprehending and simulating economies, giving equal weight to the natural resources that support an economy and its operational principles. 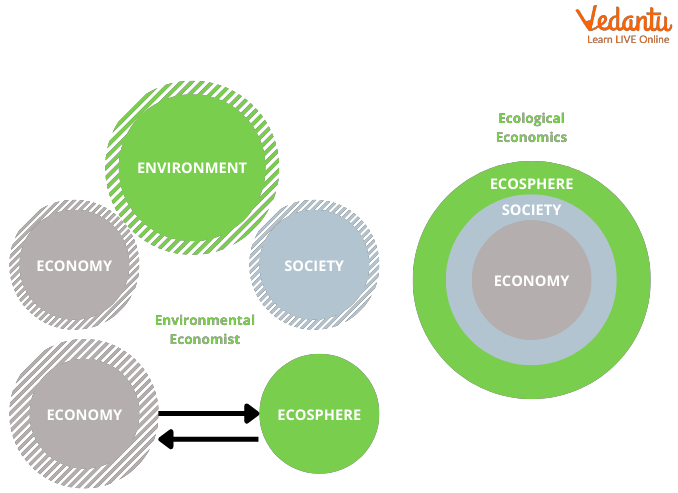 A green economy can lead to sustainable growth. It can also aid in the abolition of poverty. However, each country experiences the transition to a green economy at a different pace. Resources, knowledge, and information are crucial for the shift to a greener economy.

1. Which effects will the shift to a green economy have on the labour market?

The term "green economy" doesn't have a single definition. The concept's defining feature is the recognition of the economic importance of ecological services and natural capital and the necessity of protecting those resources.

Most definitions embrace sustainable development's more all-encompassing approach in addition to environmental considerations. Therefore, most definitions of the "green economy" include concepts like social justice, environmental sustainability, and locally-based production and exchange of goods and services.

A "green economy," according to the United Nations Environment Programme, is one that considerably reduces environmental dangers and ecological scarcities while also enhancing human well-being and social fairness. A green economy can be defined as one that is low-carbon, resource-efficient, and socially responsible.

2. How does the Green Jobs Programme encourage green employment on a national scale?

Constituents are becoming increasingly curious about green jobs, especially due to the high rates of underemployment and unemployment. They want to know if there are any fresh chances for economic development and job creation, and if so, how best to take advantage of them to broaden social inclusion and combat poverty. The Green Jobs Programme uses a variety of ways of action to encourage the creation of green jobs at the national, sub-national, and local levels:

3. How can Green Technology affect the economy?

The economist Hans Werner-Sinn initially proposed the controversial and paradoxical "green paradox" in 2007. According to it, any policy that aims to gradually cut back on the use of fossil fuels will have the unanticipated result of accelerating that use shortly. This is because fossil fuel firms will try to get more money out of fossil fuels now, knowing that they won't be able to get that money afterwards.