Foreign Direct Investment can be stated as the investment made by potential investors outside the country. FDI can be acquired by taking up substantial stakes in firms abroad. It is an important part of the global economy, and it has a positive impact on both the host country and the foreign companies involved. It can stimulate a country’s economy by creating new job openings, increasing the production capacity of the nation, and improving the lives of residents.

What is Foreign Direct Investment?

Foreign direct investment is an investment where an entity acquires stakes in a company based in another country. Foreign Direct Investment is vital in supporting developing countries by motivating them to participate in international trade by facilitating the flow of capital, skills, and knowledge. There are certain factors that may affect international investments. A few of the factors are discussed in the article.

1. It Helps in Diversifying Investor's Portfolio

Investors investing in FDI will have a diversified portfolio comprising many investments that can be national investments or FDI.

Advanced countries making FDI are a great opportunity for developing countries. They are likely to bring cutting-edge technology and skills with them to the host country which can be very helpful to a developing country like India.

What is the Lasting Interest and Element of Control in FDI

The core factors that influence international investments are listed below:

Usually, companies invest abroad to outsource labour from countries where wages for production workers are less. By doing so, they save up a huge amount of production costs.

It is one of the major factors that affect foreign direct investments. A stable government is merely necessary for any investments related to FDI. Investors look out for countries whose governments support FDIs and will not take steps that will hamper the operations of the business. 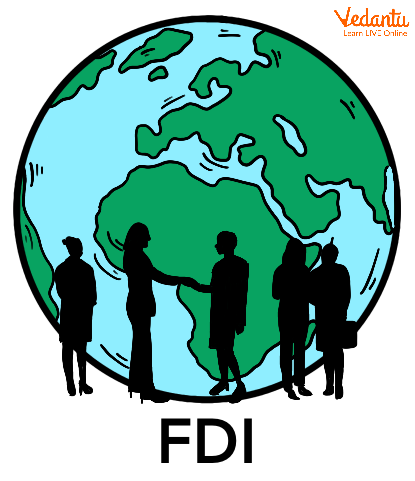 FDI whole Over the World

Factors Favourable for any Investment

Investments are made out of current savings and by borrowing from finance firms like banks. Thus, interest rates play an influential role in investments. Higher interest rates for borrowing make it more costly whereas keeping money in the bank will yield higher rates of interest.

Businesses make investments to fulfil future demands. If there is a recession in a country, firms already invested will draw back their investments. Investors study the economic growth of countries before investing to analyse recession and investment falls. If a country's economy is booming, investors are likely to invest as they expect a rise in demand.

Inflation rates are significant in investments. Higher inflation rates create hesitation and confusion within the firms with the added uncertainty over the future cost of acquisition.

China has been attracting numerous FDIs in the past decade. Shanghai is the economic capital of China. According to the reports released by the World Bank in 2019, China had $170 billion in FDIs. The United States is the largest recipient of FDIs in the world whereas China and Hong Kong are ranked below the United States on the list of the world's largest recipients of FDIs.

Effects of FDI from China at the Global level

FDI has played a major role in fostering Chinese economic growth, and the FDI technological spillovers are propelling China to new growth milestones. Because China wants to develop, there is rivalry for FDI. The poor protection of the environmental system cannot stop FDI from entering into China's polluting and resource-intensive manufacturing cycle, generating environmental difficulties.

Countries are willing to be a part of the booming globalisation process. Foreign Direct Investment can be seen as an approach by many countries allowing globalisation. FDI has a positive impact on the host country as it brings innovation, creates jobs, and expands businesses. FDI can be made by acquiring 10 % lasting interest, i.e., the right to vote. There are a few factors that can influence international investments/ foreign direct investments like corporate tax, the infrastructure of the host country, and labour charges.

1. Is exporting goods an example of Foreign Direct Investment?

No exporting goods will not be classified as foreign direct investment. Exporting is a part of international trade from a country. It helps businesses earn profits and to get the global reach of the products. On the other hand, FDI is an investment made outside of the country to acquire controlling rights in a foreign business. FDI allows investors to set up manufacturing plants or subsidiaries in a foreign country. Investors can also merge with or acquire a foreign business.

2. What are the factors that play a vital role in Foreign Direct Investments?

There are various factors that can influence foreign direct investments. Investors willing to make FDI firstly select a host country in which they will invest. Then they study the markets of that country and analyse the growth capacity of  the country. Countries with lower corporate taxes are always on the radar of investors. Lower corporate taxes will allow investors to use the money for more production or to acquire more stakes in businesses. Infrastructure and skilled labour are the backbones of every existing business. Therefore, it will have a great impact on FDI.

FDI has the potential to boost investments, and it will increase the consumption level of the country. It will have a corresponding direct effect on the investments. Nations accepting FDI tend to have technological advancements and skills across the globe. As per the FDI norms, inventors have to bring advanced technology and skills to the host countries that can be a resource to the host countries. Exposure to new technologies and skills will help the GDP of the country to a greater extent.