India is a land of diversity in several aspects. We associate the people and regions with the language they speak. For example, if a person is speaking Bengali or Punjabi, we will relate to them as living in the Bengal or Punjab regions. Moreover, each region across the nation has its own culture, traditions, food and lifestyle. But, have all these regional cultures existed forever? No, this is surely a misconception. The regional cultures that we experience and follow in the present day have evolved by the mixing of local traditions with ideas and values inculcated from other regions. While there are some old practices that people still follow, but, over time, they are evolving into new forms. Let us help you in gaining a deeper insight into the making of regional cultures with our class 7 history chapter 9 notes. 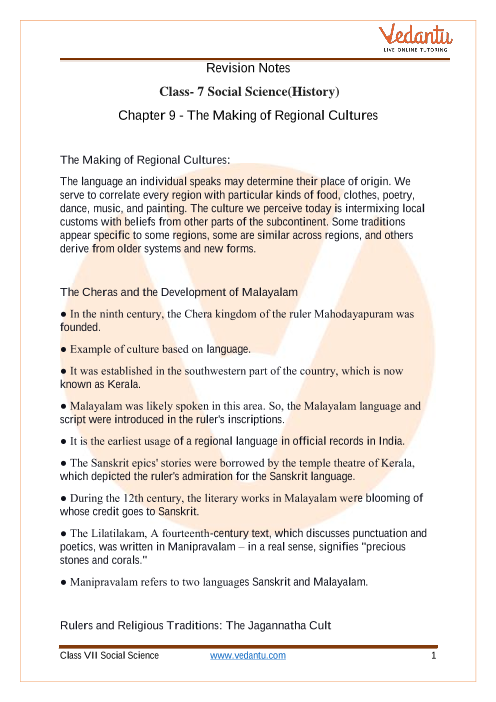 The Making of Regional Cultures

The language an individual speaks may determine their place of origin. We serve to correlate every region with particular kinds of food, clothes, poetry, dance, music, and painting. The culture we perceive today is intermixing local customs with beliefs from other parts of the subcontinent. Some traditions appear specific to some regions, some are similar across regions, and others derive from older systems and new forms.

The Cheras and the Development of Malayalam

The Rajputs and Traditions of Heroism

Beyond Regional Frontiers: The Story of Kathak

Painting for Patrons: The Tradition of Miniatures

1. Were paintings only done by the artists?

Ans: No, even ordinary people painted. Familiar people also painted on floors, walls, clothes, and pots. Far apart from the miniatures precisely preserved in palaces for centuries, these works were not properly maintained. Miniature paintings were considered more valuable than usual paintings by ordinary people for decoration or hobbies.

Ans: Ancient Bengali literature was divided into two categories. One was indebted to the Sanskrit language, and the other was independent of Sanskrit. The first type includes the translations of Sanskrit literary works. For instance, the Mangal Kavyas, which managed nearby divinities and bhakti writing like the memoirs of Chaitanyadeva, the head of the Vaishnava bhakti development. The second includes the literature type called Nath, which comprises Maynamati and Gopichandra. Those are the stories about Dharma Thakur and fairy tales, folk tales, and ballads.

Ans: A Persian word meaning a profound aide. Local area pioneers, who are likewise instructors and adjudicators and now and again with extraordinary forces, were called Pirs. They planned to balance out the local area. It consisted of saints or Sufis and other religious preachers, soldiers, colonizers, many Hindu and Buddhist gods, and animistic spirits. Pirs even had their shrines.

5. Explain one example of the linguistic influence on culture.

6. Why did Bengali Brahmins relax the prohibitions?

Ans: Fish was a staple diet of Bengalis. Bengal is a land having more access to riverine and sea. Brahmanas generally don't consume Non-Vegetarian food. But Bengal Brahmins Consumed fish, as fish were a significant food supply for Bengalis, as close to riverine. On the dividers of sanctuaries and viharas depict pictures of fish being dressed and taken to the market.

7. List the "classical" dances recognized by the Indian government.

Ans: Dance forms that are recognized as classical are:

Ans: The attribution of the living soul to plants, lifeless things, and everyday marvels is known as animism.

It is a conviction framework expressing plants and creatures to have a spirit quintessence. It was a significant piece of the profound instruction of antiquated India.

9. What is Manipravalam? Name a book written in that language.

Manipravalam means, in a real sense, "jewels and corals," which is accepted to allude to the two dialects, Sanskrit and Malayalam.

The Lilatilakam, A fourteenth-century text, which discusses punctuation and poetics, was written in Manipravalam – in a real sense, signifies "precious stones and corals."

10. What are the critical structural provisions of the sanctuaries of Bengal?

Ans: The Bengali sanctuaries replicated the twofold roofed or four-roofed design of the covered hovels. This prompted the movement of the good Bengali style in sanctuary engineering. In the somewhat more composite four-roofed design, four three-sided rooftops situated on the four dividers progress to associate on a bent line or a point.

Temples were generally constructed on a square platform. The inside was genuinely plain. However, a few sanctuaries' external dividers were decorated with different art, elaborate tiles, and earthenware tablets.

1. How was fish taken as food in the Bengal region?

The food habits were highly influenced by the local items available. The Bengal region being a riverine plain, had immense produce of fish and rice. This made these items prominent in the Bengali meals. Moreover, fishing has always been a prominent occupation for the people in that region. But, the Brahmans could not eat it because of religious constraints. However, as fish became more popular, Brahmanical authorities relaxed this prohibition in the nineteenth century.

2. Give some of the main architectural features of temples in Bengal.

The list of some of the architectural features which are significant in the temples of Bengal include: