A traveller during his travels through a medieval town might find different types of centres. It could be an administrative centre or a port town or a commercial town. Most of these towns tend to have so many different types of plots such as temples and so much more. In order to know more about the towns, people need to dive deep into the population, craftsperson details and so much more.

This is exactly what we have to discuss here with Class 7 history towns traders and craftspersons notes. Here in this summary, we are going to provide an overview of different types of towns and what can one find in them. 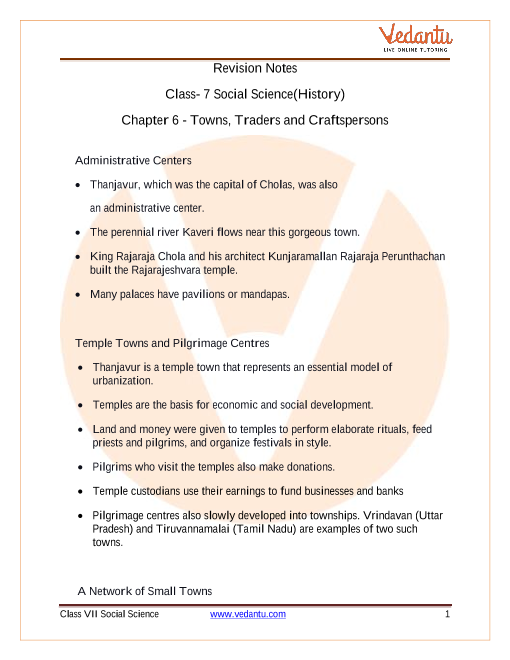 An Overview of The Administrative Centers

One of the main examples of the Administrative centres would be Thanjavur which is the capital of Cholas. Situated near the Kaveri river, this place has the Rajarajeshvara Temple which was built during the Chola dynasty. There is a water supply in the town which is provided from the wells along with the tanks. The nearby towns of Uraiyur tend to produce certain cloth for the flags and so much more. With the help of the towns traders and craftspersons Class 7 notes, one can find out more about this administrative centre.

Details of Pilgrimage Centers and The Temple Towns

The temple towns tend to provide an important pattern that denotes urbanization. This is a process with which the development of the city is possible. The temples are pretty much essential for the economy and people can definitely showcase their devotion through these towns which are dedicated to deities and temples built in their honour. With the increase of the population near these towns, there were more priests, artisans, and workers to take care of it. Some of the other temple towns are built such as Somnath which is situated in Gujrat and Tirupati which is situated in Andhra Pradesh. You can find all the details in the town’s traders and craftsmen Class 7 notes.

Understanding The Network of Small Towns

Starting from the 8th century, there were a lot of small towns jotted along the subcontinent. These towns were a result of larger villages and they have a mandi or a mandapika. The villagers would bring the products in order to sell them there. These locations were known as Haat or Hatta. The locations were lined with different types of shops in the streets in which artisans such as oil pressers, potters, sugarmakers, smiths, and such traders would sell their trades. You can get all the details in Class 7 history Ch 6 notes.

There were many different types of traders, one of which was known as Banjaras. These were the horse traders who would negotiate with the warriors who went to buy the horses. These traders would pass from one kingdom to another on their caravans in search of proper trading places. Some of the most important groups of traders came to be known as Chettiars, Baniya, or the Bohras in different communities. These traders would also extensively perform their trade-in the Persian Gulf, the Red Sea and so many other areas. You can refer to the Class 7 history towns traders and craftspersons notes.

Different Types of Crafts in Towns

The Bidar or more commonly known as the Craftspersons were pretty much famous for the inlay work that they did in silver and copper. Most of them came to be known as Panchalas. There were some other goldsmiths, masons, blacksmiths, bronze smiths as a part of the community. They were also responsible for the building of the temples and had a very important role to play in the construction of different types of palaces as well. In the Towns traders and craftspersons Class 7 notes, you can find some details about these craftspeople.

Establishment of New Towns and Different Trades Associated With Them

Over time, during the early 16th as well as the 17th century, the European countries began searching for spices and textiles. Also, the formation of East India Companies marked the beginning of an expansion of several commercial activities which were committed in the east. This led to the formation of new trades as the officials would force Indians to work in the position of their agents. With the increase in the political and commercial power of English, there was more demand for certain goods and this also led to the growth of the textile industry, thus giving birth to new trades and traders. There are more details in the towns traders and craftsmen Class 7 notes.

1. How was the Water Supplied to Thanjavur?

Ans: Water in Thanjavur came from tanks and wells which were provided to the city with the help of certain channels.

2. Who Inhabited the ‘Black Towns’ in the Cities such as Madras?

Ans: Several artisans and merchants along with some native traders would inhabit the ‘Black Towns’ in Madras.

3. What was the Reason for the Growth of Towns Around Temples?