It is easy to download the NCERT Solutions Social and Political Life Class 8 PDF from the website and app. The study material comes with step by step solutions that make answers simple and easy to understand. This NCERT Solution Class 8 Social Science Chapter 5 has all answers given by the subject experts. By preparing for the exam using this study material, students can face the exam with ease.  The answers in the solutions for the chapter Social and Political Life Class 8 NCERT Solutions are compiled in a way that even an average student finds it easy to get into the concepts.

Every NCERT solution is provided to make the study simple and interesting on Vedantu. Subjects like Science, Maths, English,Hindi and Social Science will become easy to study if you have access to NCERT Solution for Class 8 Science, Maths solutions and solutions of other subjects. You can also download NCERT Solutions for Class 8 Maths to help you to revise complete syllabus and score more marks in your examinations. 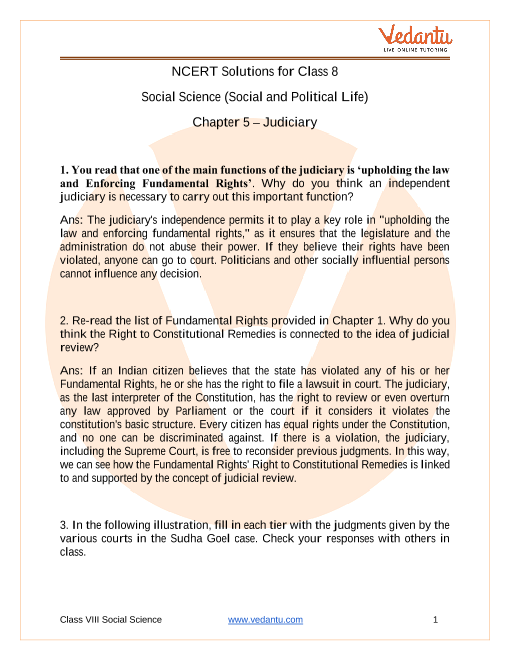 Q1. You read that one of the main functions of the judiciary is ‘upholding the law and Enforcing Fundamental Rights’. Why do you think an independent judiciary is necessary to carry out this important function?

Ans: The independent judiciary is necessary to carry out this function because the judiciary's independence permits it to play a key role in "upholding the law and enforcing fundamental rights,". It ensures that the legislature and the administration do not abuse their power. If they believe their rights have been violated, anyone can go to court. Politicians and other socially influential persons cannot use their power to influence any decision.

Q2. Re-read the list of Fundamental Rights provided in Chapter 1. Why do you think the Right to Constitutional Remedies is connected to the idea of judicial review?

Ans: If an Indian citizen believes that the state has violated any of his or her Fundamental Rights, he or she has the right to file a lawsuit in court. The judiciary, as the last interpreter of the Constitution, has the right to review or even overturn any law approved by Parliament or the court if it considers it violates the constitution's basic structure. Every citizen has equal rights under the Constitution, and no one can be discriminated against. If there is a violation, the judiciary, including the Supreme Court, is free to reconsider previous judgments. In this way, we can see how the Fundamental Rights' Right to Constitutional Remedies is linked to and supported by the concept of judicial review.

Q3. In the following illustration, fill in each tier with the judgments given by the various courts in the Sudha Goel case. Check your responses with others in class.

Ans: Laxman, his mother Shakuntala, and his brother-in-law Subhash Chandra were all sentenced to death by the lower court (Trial Court).

Laxman, Shakuntala, and Subhash Chandra were acquitted by the High Court.

Laxman and Shakuntala were sentenced to life in jail, while Subhash Chandra was acquitted due to a lack of evidence by the Supreme court.

Q4. Keeping the Sudha Goel case in mind, tick the sentences that are true and correct the ones that are false.

(a) The accused took the case to the High Court because they were unhappy with the decision of the Trial Court.

Ans: True- The defendants appealed to the High Court because they were dissatisfied with the Trial Court's ruling.

(b) They went to the High Court after the Supreme Court had given its decision.

(c) If they do not like the Supreme Court verdict, the accused can go back again to the Trial Court.

Q5. Why do you think the introduction of Public Interest Litigation (PIL) in the 1980s is a significant step in ensuring access to justice for all?

Ans: Since filing lawsuit in the courts was exceedingly expensive before the 1980s, the establishment of Public Interest Litigation (PIL) in the 1980s was a key step in improving access to justice for all. The illiterate and underprivileged cannot afford to seek justice in India for exploitation or violations of their basic human and fundamental rights. People have been able to file cases with the Supreme Court or the High Courts by sending a letter or telegram since the 1980s. Without investing any money, the courts accept it as a PIL (Public Interest Litigation).

Q6. Re-read excerpts from the judgment on the Olga Tellis vs Bombay Municipal Corporationcase. Now write in your own words what the judges meant when they said that the Right to Livelihood was part of the Right to Life.

Ans: The justices in the case of OlgaTellis vs.Bombay Municipal Corporation stated that the Right to Livelihood was a part of the Right to Life. They claimed that life is more than just an animal existence; it can't survive without a means of subsistence, or "the means of livelihood." No one can exist without a source of income. A person's livelihood is earning money in order to purchase food, clothing, and shelter. As a result, no one may be deprived of their livelihood. The court agreed that eviction from a pavement or slum deprives the impoverished of their means of subsistence since they cannot afford to live elsewhere. They do small jobs in the neighbouring districts, and losing their pavement or slum would mean losing a job, and hence a source of income. As a result, "life deprivation" occurs. The judges linked the Right to Livelihood to the Right to Life in this way.

NCERT Social Science Class 8  Chapter 5 – Judiciary belongs to Social and Political Life. If you are a student of Class 8, you must have learned this chapter using NCERT Textbooks. The important points and concepts of topics such as five different concepts of the judiciary are explained and why the independence of the judiciary is important. These concepts come with diagrams and in a simple language that helps anyone learn better. It also engages with activities and experiments on the topic to make learning interesting.

Our subject matter experts have prepared these NCERT Solutions to provide a strong foundation for the subject.

This Class 8th Science Chapter 5 has a weightage of 20 marks and this is one of the most important topics. Questions keep repeating in the board exams from this subject, for which preparing from these study materials makes students score better.

Here is more detail about the contents of Chapter 5 Judiciary Class 8.

Why are NCERT Solutions For Class 8 Social Science Chapter 5 Important?