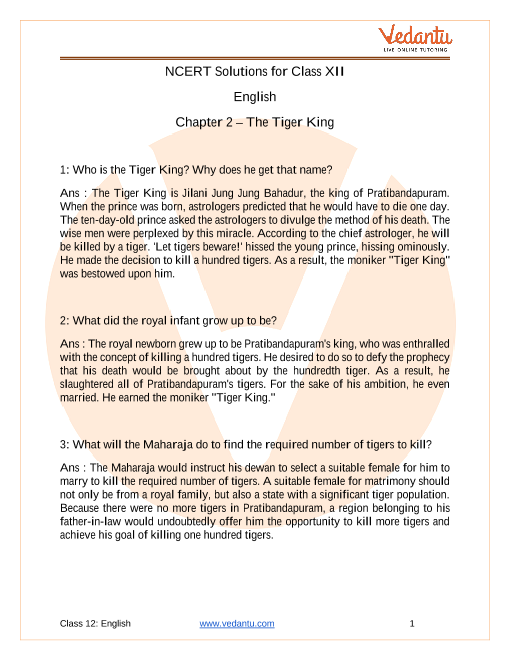 1. Who is the Tiger King? Why Does He Get That Name?

Ans: The Tiger King is Jilani Jung Jung Bahadur, the king of Pratibandapuram. When the prince was born, astrologers predicted that he would have to die one day. The ten-day-old prince asked the astrologers to divulge the method of his death. The wise men were perplexed by this miracle. According to the chief astrologer, he will be killed by a tiger. 'Let tigers beware!' hissed the young prince, hissing ominously. He decided to kill a hundred tigers. As a result, the moniker "Tiger King" was bestowed upon him.

2. What Did the Royal Infant Grow Up To Be?

Ans: The royal newborn grew up to be Pratibandapuram's king, who was enthralled with the concept of killing a hundred tigers. He desired to do so to defy the prophecy that his death would be brought about by the hundredth tiger. As a result, he slaughtered all of Pratibandapuram's tigers. For the sake of his ambition, he even married. He earned the moniker "Tiger King."

3. What Will the Maharaja Do To Find the Required Number of Tigers To Kill?

Ans: The Maharaja would instruct his dewan to select a suitable female for him to marry to kill the required number of tigers. A suitable female for matrimony should not only be from a royal family, but also a state with a significant tiger population. Because there were no more tigers in Pratibandapuram, a region belonging to his father-in-law would undoubtedly offer him the opportunity to kill more tigers and achieve his goal of killing one hundred tigers.

4. How Will the Maharaja Prepare Himself for the Hundredth Tiger Which Was Supposed To Decide His Fate?

Ans: When dealing with the hundredth tiger, which was said to be the cause of his death, the Maharaja would be extra cautious. When he comes across the hundredth, he will carefully aim at the tiger and shoot it. He'll be overjoyed when it collapses into a crumpled heap, and he'll rush out of there.

5. What will now Happen to the Astrologer? Do You Think the Prophecy was Indisputably Disproved?

Ans: Before the king of Pratibandapuram had a chance to slaughter a hundred tigers, the astrologer dies. The king's existence appears to be solely to disprove his prophecy. Everything else for the king takes a backseat to slaughter a hundred tigers. The prophecy can't be proven false because the king was eventually murdered by a tiger, though not a real one or the hundredth. No one would have guessed that the hundredth tiger, which was feeble, aged, and almost lifeless, would escape the king's bullet by fainting from the shock of the bullet speeding by. The death of the Tiger King was brought about by the toy shop's "small little wooden tiger."

6. The Story is a Satire on the Conceit of Those in Power. How Does the Author Employ the Literary Device of Dramatic Irony in the Story?

Ans: "The Tiger King" is a brilliant example of dramatic irony. The term "dramatic irony" refers to a situation in which the audience may see the full impact of a character's words or actions but the character is unaware of it. The character behaves irrationally in light of the circumstances or expects the polar opposite of what fate has in store for him. In the story, Kalki employs a deft use of dramatic irony. The King flaunts the dead body of the first tiger in front of the astrologer to demonstrate that he is more strong than the tiger. The astrologer, on the other hand, cautions the king to "be careful with the hundredth tiger." The king decides to prove the astrologer incorrect once more by attempting to kill a hundred tigers in a desperate effort. Thus, the Tiger King believes he has killed the hundredth tiger by shooting at the old tiger. However, the reader, as well as the king's officers and subordinates, quickly discover that the malnourished tiger is not murdered, but has simply fainted. The king is pleased with himself for killing the tiger, but he is unaware of the ironic fate that awaits him. A sliver on the wooden tiger's body which was the toy of his child causes his spectacular death. Ironically, the hundredth tiger kills the king instead, proving the astrologer's predictions correct.

7. What is the Author’s Indirect Comment on Subjecting Innocent Animals to the Willfulness of Human Beings?

Ans: The author has accurately depicted how humans have forced innocent animals to untold suffering and death to satisfy their whims and fancies through this satirical novel. The maharaja's indiscriminate shooting of tigers resulted in the extinction of the species in several states, but the maharaja was unaware of the serious ramifications of his actions. The maharaja went on a killing rampage to display his authority over the helpless animals to prove an astrologer wrong. He used his abilities to murder a hundred unlucky tigers to demonstrate his superiority as a human being.

8. How Would You Describe the Behaviour of the Maharaja’s Minions Towards Him? Do You Find Them Truly Sincere Towards Him or Are They Driven by Fear When They Obey Him? Do We Find a Similarity in Today’s Political Order?

Ans: The Maharaja's servants were obedient and adoring. The majority of them feared Maharaja and tried to please him by obeying his instructions so that they could save their jobs or perhaps their lives. The astrologer was frightened of forecasting his death, but Maharaja had insisted that he speak freely. Dewan, who should have counselled the king against killing the tigers, instead chose to support him in his marriage to a princess whose father realm had a great number of tigers. He provided an old tiger to appease his Maharaja's demands because he was frightened of losing his job. Similarly, the hunters elected not to alert him of the 100th tiger's survival and instead killed it themselves for fear of losing their jobs. Even the shopkeeper who sold the king a cheap wooden toy tiger raised his price to avoid being fined under the emergency laws. As a result, the king's servants were motivated by fear rather than any genuine feelings for their ruler. Today's political system is no exception. We all know that many people in positions of power are there because of their influence and power, not because of their competence. Furthermore, others pander to them for personal gain rather than the sake of the country.

9. Can You Relate Instances of Game-Hunting Among the Rich and the Powerful in the Present Times That Illustrate the Callousness of Human Beings Towards Wildlife?

Ans: In recent years, there have been a few incidents of game hunting. Even the wealthy have been involved in incidents demonstrating human callousness towards nature. Salman Khan is involved in a poaching case involving blackbucks. Nawab Mansoor Ali Khan Pataudi is involved in an antelope lawsuit. Salman Khan is a well-known Bollywood actor who enjoys hunting. He snatched three Chinkaras in a row on two occasions. The blackbuck is a critically endangered animal. Even though he was aware of it, Salman killed them. He was charged with a crime, but he was judged not guilty. Nawab Pataudi, the great cricketer, was also in the news for assassinating rare antelope species.

Vedantu’s NCERT solutions Class 12 English Vistas Chapter 2 includes questions and answers included in The Tiger King exercise. This will give you a clear concept of this chapter and you will be able to solve the solution by yourself. 100% precise answer is formulated by experienced professionals from the renowned industry. The CBSE students must have a complete grip on the book knowledge, and with the help of Vedantu they can easily achieve it. In The Tiger King Class 12 NCERT solutions, the important questions which are often seen in the test papers are briefly solved by the Vedantu's expert.

The benefits would be obtained by the students with the help of Class 12th Vistas Chapter 2 ncert solutions.

With the help of Vedantu app and it's Class 12 English Chapter The Tiger King NCERT solution, students can tackle all the questions which could trouble them in the exam, without confusion, students can easily get rid of and can improve their mark.

Vedantu study material is available for all courses. They also provide CBSE tuition, ICSE tuitions, JEE main preparation, NEET preparation, HC Verma solutions etc. It delivers both individual and group tuition and delivers student-friendly material that any type of students can easily understand thoroughly. Firstly the main context, then all the important questions included in the last ten years test papers are briefly sought out by the professionals. There are also extra miscellaneous questions that would help to understand the topic clearly.

Vedantu stands for " Veda" = knowledge and "tantu" refers to the network. This means the founder tries to give a classroom-based teaching-learning platform with the help of virtual technology, where students can easily earn more proficiency in studying with ease at any time at any location. In the Live lecture process, they will relate the theoretical knowledge with practical examples. There are experts who ensure to clear additional doubts of students and also help them to get proper counselling before board examination. This teacher-learner interaction process makes this app more preferable. Download the Vedantu app to get the best guidance.

1. Why Does the Maharaja Kill the Tiger?

Ans. The story 'The Tiger King' describes the arrogance of those in power. The storyline goes as a man is born, who will be becoming the king. When the king was a newborn of ten days, an astrologer predicted, however, that a tiger in the forest would kill the king. As he belongs to the royal family, this prediction is not accepted by the king because of his superiority. After he was crowned as the king, he started to kill all the tigers in the kingdom. He also banned tiger hunts in his kingdom. He wanted to prove the prediction wrong. He was killing all the tigers in his kingdom tirelessly. He had killed 99 tigers and was looking for his 100th kill.

2. Why Does the Maharaja want to get Married?

Ans. When he was too young, just ten days, an astrologer predicted that a tiger will kill him, in the purpose of to prove the prediction lie he started tiger hunting at such a rate that within a few years there were no tigers left in Prabitibandapuran. Hence, he decided to marry a girl belonging from a new royal state, where the most tiger available, so he can fulfil his target. This is the actual reason for the king to get married.

3. Is Vedantu the Best Reference for Achieving a High Grade?

Ans. Yes, of course, it is one of the best references as well as the study material for one exam preparation. It gives strong guidance and helps to become an expert in each subject. The answer or pdf provided by the app will prepare you for a good and revised lesson for many times. After that, you can write an answer instantly in the exam. Its emphasis on the important points and concepts in every chapter instead of reading out the whole; this ultimately helps you to capture the depth of the topic and helps to gain the knowledge as a whole. Besides, pdfs for all subjects, Vedantu also offer  Live online classes where all chapters are taught properly and clear the problem to make the whole concept easier for the students. So, no doubt it is one of the best references to their students to score well in the near exam.