Animal Pictures with Names for Kids in English

Millions of Animals on the earth! Let’s Learn about Some of Them

Hey kids! Do you know all the animals' names? The cows that moo, the roosters that cock-a-doodle-do… These are the animals which you often see in your neighbourhood. But do you know that there are 8.7 million animals in this little world of ours? What do those animals look like? What are they called? Do you want to know? Then, follow me to see the animal pictures with the names of the kids.

Before that, let us know what animals are.

Animals are living beings living on this planet just like humans. These creatures need food, water, and shelter to exist. They usually walk on all four limbs, although some of them climb trees, swim, hop and fly.

What Are the Different Kinds of Animals?

As we grow up, we must know the names of the animals. This will help us to know and identify the animals and also help us to increase our general knowledge.

Do you know about the ‘Kingdom Animalia’? All the animals belong to this biological kingdom. This kingdom is broken down into 30 groups! Indeed a huge one!

75%  of the species thriving on this planet are animals. Let us know the different kinds of animals who live on this earth with us. In the following section, we will present two charts where we will study the wild animals and the domestic animals.

Meet the Wild - Learn about Wild Animals with Pictures

In this section, let us know the popular wild animals who live in the jungles and wild forests. The display of the chart of wild animals is as follows - 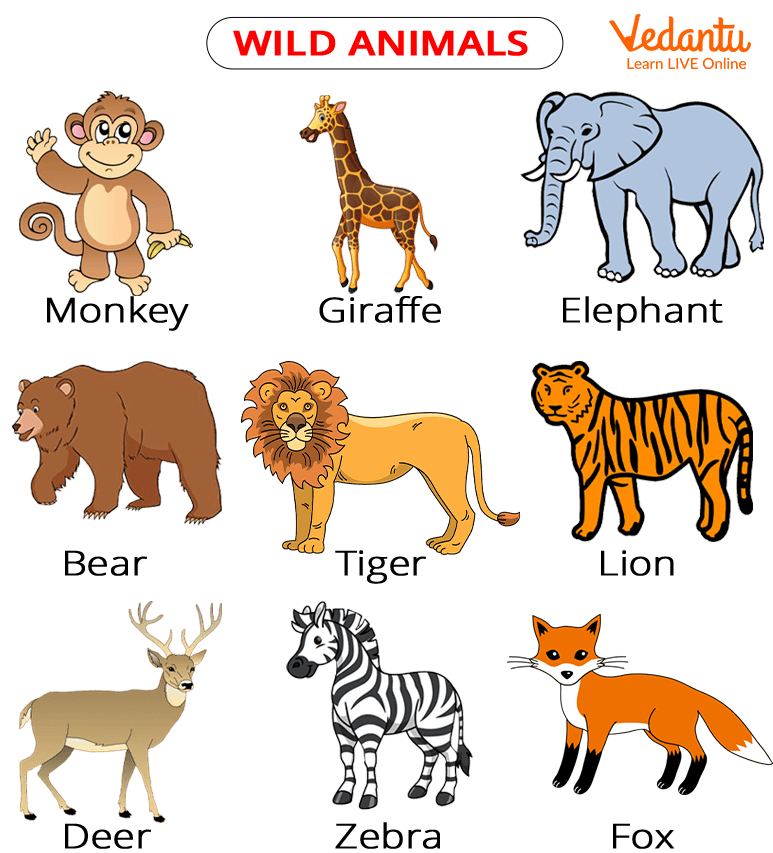 In the above picture, we see 9 wild animals. Their names are -

Among them, do you know who is called the ‘King of the Jungle?’ That is definitely the lion! And who is the ‘National Animal of India’? It is the tiger. Next, on the list is the largest existing land mammal - the elephant! We then have the giraffes with their longest neck. They are incredible, aren’t they?

Let us know about other animals too - there is the fox, zebra, deer, monkey, and bear. Foxes are small to medium-sized animals with their flat skull, pointed ears, and long bushy tail. Zebras are beautiful animals with black and white stripes all over their body.

Deers are gracious too. They are characterised as hoofed, even-toed mammals. Monkeys are funny creatures! They will imitate you and if trained will be a good friend to you. Did you know that monkeys too have unique fingerprints like humans?

Now, we will learn about domestic animals who live with us in our homes or those you commonly see in your neighbouring area. 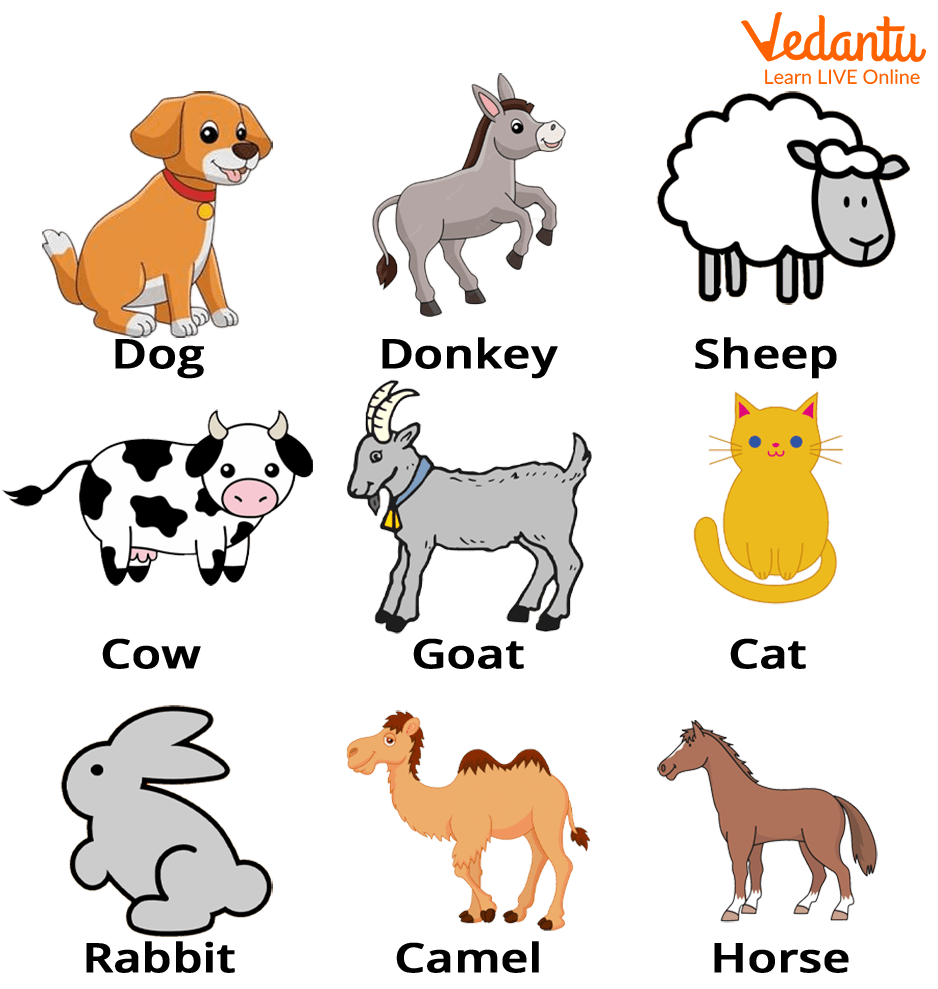 In the above picture, we see 9 domestic animals, they are -

Dogs are often tagged as ‘best friends of humans’. They are known as loyal animals who reside with us. They stay in our home, we pet the dogs and they love us incredibly.

Donkeys are the animals who carry heavy weights. Goats are herbivorous animals who feed on grasses; they are found in villages mostly. Cows are worshipped by Hindus. These animals are regarded as mothers as they give us milk. They are considered to be the biggest source of milk consumed by human beings.

We are abundantly thankful for the mooing creatures - the cows. Then we have sheep who give us wool so that we can make warm clothes, thereby protecting us from cold weather. Cats are also common like dogs, they are another cute furry friend. Camels are called the ship of deserts. They act as the means of transport in the desert areas. Horses are fast-running animals which are also used for transport, especially in olden times. Rabbits are another adorable tiny creatures who can be domesticated and love carrots.

Thus, this was all about some of the common wild animals and domestic animals. We hope now you can spot these animals whenever you come across them. If you had fun reading and learning about animals, head over to our website to read similar articles.

FAQs on Animal Pictures with Names for Kids in English

1. Which is the fastest animal in the world?

The cheetah is the fastest animal in the world. They are wild animals as well that resemble a lot like a tiger but they are not. Cheetahs have the capacity to run upto 70mph!

2. Who is the slowest animal in the world?

Sloths are known as the slowest animals. They can be spotted upside down hanging from the trees.

3. Name some uniquely beautiful animals in the world.

Some of the beautiful animals in the world are: