CBSE Class 8 Political Science (Civics) Chapter 6 notes are carefully prepared by the expert teachers who are having years of experience in teaching Social Science. These Understanding Our Criminal Justice System Class 8 notes are easy to understand, comprehensive, and a good study material to refer to before the board exams. Students can download notes of Class 6 Political Science (Civics) Chapter 6 in free PDF format to study offline as well. 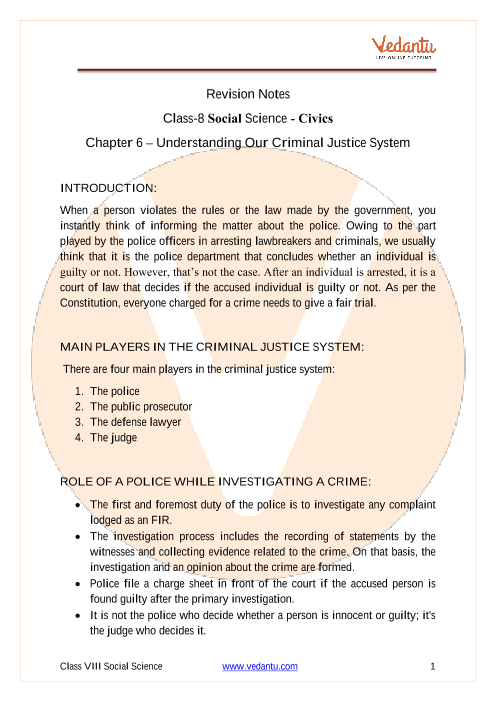 When a person violates the rules or the law made by the government, you instantly think of informing the matter about the police. Owing to the part played by the police officers in arresting lawbreakers and criminals, we usually think that it is the police department that concludes whether an individual is guilty or not. However, that’s not the case. After an individual is arrested, it is a court of law that decides if the accused individual is guilty or not. As per the Constitution, everyone charged for a crime needs to give a fair trial.

There are four main players in the criminal justice system:

Role of a Police While Investigating a Crime:

Role of the Public Prosecutor:

Role of the Judge:

Article 21 of the Constitution and the Criminal Law states the right to life that defines a person's Liberty or life can only be taken away by following a legal procedure.

Important Elements of a Fair Trial Are:

1. What are the requirements and the process that the police should follow for detention, arrest, and interrogation of a person?

Ans: The supreme court of India had provided some guidelines to the police for arresting, detaining, or integrating any person. They are as follows:

2. Why should there be a rule that the compression made during custody can’t be used as evidence against the accused?

4. Why do different persons play different roles in the criminal justice system?

5. Define the role of a judge in the criminal justice system.

Ans: The role of the judge is as follows:

6. Define the role of the police in the criminal justice system?

Ans: The role of the police is as follows:

7. Differentiate between a public prosecutor and a defense lawyer?

Ans:  A public prosecutor and a defense lawyer work for the criminal judiciary system. The role of the public prosecutor is to represent the state of an offense or culprit who is committed against the victim and the whole society and the role of a defense advocate is to do everything for the accused to clear the charges of the defendant within the law.

8. What is a criminal justice system and note down the four important

The Four Main Players in the Criminal Justice System Are

Q1. What is “Understanding our Criminal Justice System”?

Ans: In this chapter, we will look at our criminal justice system. When we observe someone breaking the law, our first thought is to call the cops. You may have witnessed police officers submitting reports and making arrests in real life or in the movies. Because of the police's role in arresting people, we are frequently perplexed and believe that the police are the ones who decide if a suspect is convicted or not. This, however, is not the case.

Q2. What is the role of a judge in the criminal justice system of Chapter 6 of Class 8 Civics?

Ans: The judge acts like an official in a game, conducting the trial in a fair and transparent manner. All eyewitnesses and other information provided by the defence and prosecution are heard by the judge. On the basis of empirical knowledge given and in line with the law, the judge determines whether the accused individual is guilty or innocent. If the accused is found guilty, the court will impose a punishment. Depending on the legislation, he may sentence the defendant to prison, impose a fine, or both.

Q3. What are the conditions of a fair trial according to Chapter 6 of Class 8 Civics?

Ans: Following an investigation, a court of law determines whether the accused individual is guilty or not. The Constitution guarantees that anybody accused of a crime receives a fair trial. It's noteworthy that the judge resolves the case solely on the facts presented in court. The judge will not make a snap decision based on a lack of evidence. Instead, the judge maintains his impartiality, and when the evidence is presented to him in court, he conducts a fair trial and punishes the offender.

Q4. Who are the key players in the criminal system according to Chapter 6 of Class 8 Civics?

Ans: The police, the public prosecutor, the defence counsel, and the judge are the four main participants in the criminal justice system. The investigation of any allegation concerning the commission of a crime is an essential job of the police. Witness testimonies are recorded and other types of evidence are collected during an inquiry. The State's interests are represented by the public prosecutor. The judge is responsible for making a fair decision.

Q5. Why is the rule of law important in a fair trial?

Ans: The rule of law, which states that everyone is equal before the law, would be meaningless if the Constitution did not guarantee every person a fair trial. After the victim has been granted a fair trial, justice is served. Both the Constitution and the legislation say that all critical individuals must carry out their responsibilities properly. This implies that they must all work together to guarantee that every person, regardless of class, caste, gender, religion or ideological affiliation, has a fair trial when charged. For detailed notes on Chapter 6 of Class 8 Civics, visit Vedantu website or mobile app and download the notes free of cost.