In today’s age, being a girl or a boy can be considered a very important step for the identity of a person. The society which is all around us always tries to teach us that we are expected to have a certain kind of behaviour as boys and girls. In other words, society tells us what girls and boys can do or cannot do. While most people might think that these expectations from boys and girls are pretty much the same everywhere else, this might not be the truth. Do all these societies tend to have the same rules for girls and boys? In order to find the answer to this question, students can take help of the Class 7 Civics Chapter 4 notes.

There are two different case studies which are mentioned in the Growing Up as Boy and Girl Class 7 notes. These case studies deal with the bringing up of boys and girls in different societies. This will definitely help the students in understanding the entire process which is known as socialization and how it is not uniform. In fact, there are some changes in the rules over different time periods. 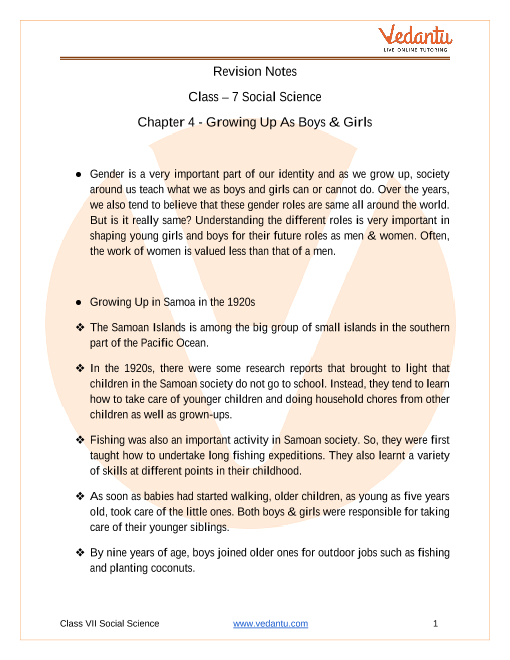 Observation of Growing up males in Madhya Pradesh in the 1960s

Case Study 1: The Samoan Society: Growing up During The 1920s

With the change in time, the children were allowed to go to school. However, during the 1960s, the children were separated from Class 6 on the basis of their gender. The girls’ school was meant for the girl students and the same applies to the boys’ school. The school for the girls had a very big central courtyard where they were made to play in safety and seclusion from the world outside. However, the school for boys didn’t really have any courtyard, and space for the boys was completely open. In the school for girls, the students always travelled in groups to mitigate the fear of being attacked or teased. More and more attention was paid to the safety of the girls.

When you study these two different types of case studies in the Class 7 Civics Chapter 4 notes, you can see that there are different methods and ways in which the children were raised. It is also pretty clear from these studies that there were some basic distinctions made between the girls and boys with the passage of time.

The Main Value and Responsibility of Housework

When it comes to housework, these days the main responsibility for it falls on the women. Not to mention that they are also responsible for most of the care-providing tasks in the family such as taking care of children and the rest of the family members. However, it is often seen that these types of tasks which are performed by women on a day-to-day basis aren’t really considered as work. Also, there is a natural assumption that this type of work should come very naturally to a girl or woman. Hence, women aren’t paid for the housework that they do since there is a devaluation of the work.

Understanding The Lives of The Domestic Workers

When it comes to housework, there are so many different types of tasks that are included in it. There is a great deal of physical effort needed for some of these tasks. In some of the urban and most of the rural areas, girls and women of different age groups are asked to do the following jobs:

This cannot be denied that women tend to work very hard and their tasks are extremely demanding physically. Not to mention that it consumes a lot of their time as well. If we were to add the housework along with the work that women tend to do outside the home, they are spending more effort and time than the men and hence have a lot less time to focus on their personal needs. Students can find more details in Growing Up As Boy and Girl Class 7 notes.

A very important principle included in the Indian Constitution is Equality and it has helped a lot in promoting the education of girls. The Equality clause states that it is not right to have any discrimination against men and women. With these changes, there are new laws for organizations to provide employment to women in most parts of the country.

1. What Work did Children do in the Samoan Society in the 1920s?

Answer: In the Samoan Society, children were raised to do the household work and take care of the home.

2. What are the Jobs for Women in Rural Areas?

Answer: In rural areas, women are expected to do tasks such as fetching water from wells, carrying and washing huge utensils, cleaning, washing clothes, and other household tasks.

Answer: There was a central courtyard in the school for girls while there was none in the boys’ school. Also, girls stayed in groups keeping in mind the safety concerns.