Vedantu aims at providing a complete overview of Class 8 Civics Chapter 2 through well-prepared notes. The chapter deals with the various aspects regarding secularism. Secularism Class 8 is one of the most significant chapters as this term is added to the Indian Constitution through the 42nd Amendment Act. The notes further explain the objectives of secularism. The perfect answer to the question ‘why it is important to separate religion from the state’ is also given in the free notes PDF. A thorough study of the notes will prove to be helpful for students. 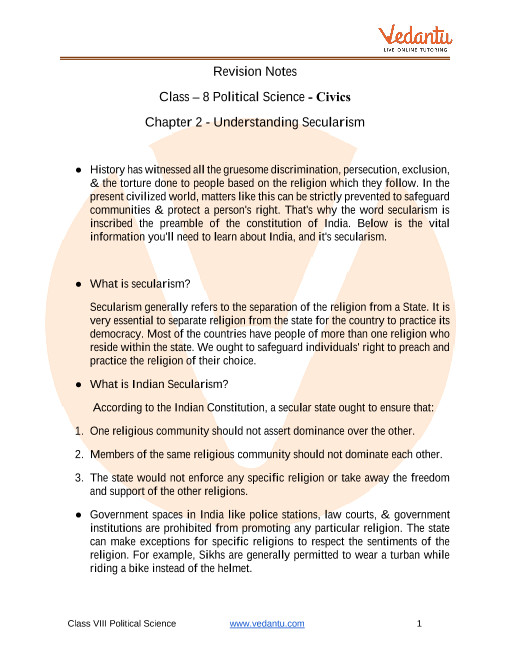 What do You Understand by Secularism?

As per Class 8 Civics Chapter 2, the answer to the question ‘what is secularism’ will be the principle that guides a state to remain separate from and non impacted upon by religious institutions.

Why is it Important to Separate Religion From State?

The answer to the question ‘why it is important to separate religion from state’ is beautifully answered in the Class 8 Civics Chapter 2 notes. According to the study material, religion should be kept separate from the State because:

What is Indian Secularism Class 8?

Following steps are taken by Indian State to protect Secularism in India:

In What Way is Indian Secularism Different From that of Other Democratic Countries?

1. What are the Problems of Indian Secularism?

2. What is the 42nd Amendment Act in the context of Secularism Class 8?

3. What do you understand about Secularism in Chapter 2?

Secularism is a belief prevailing in the society that gives religious freedom to each and every citizen of India. The objective of Secularism is to build a community where people of different faiths may live together in peace. The government of a Secular country does not interpose any political, social or economic aspects on any religion. And the citizens of a Secular country are believed to be neutral about religions in the country and not discriminate any religion.

4. How can you practise Secularism in your country?

India's massive population is diverse when it comes to religious beliefs and practices. To ensure harmony and peace in the country, we must respect each other’s religions and their practices. We should believe that we all belong to one religion and that is being Indian. We should not look at other religions with contempt. This can bring disputes among people. We should celebrate every festival and should make our upcoming generation understand the value of every religion and of Secularism.

5. What is Indian Secularism in points?

Indian secularism is an approach articulated to segregate religion from influence of any political, cultural, social or economic matters of the country.

6. Why do we need Secularism in India?

India is a country that is filled with a myriad of religious beliefs and as a country that practices Democracy, Secularism here becomes an important aspect for the country and for the citizens as well. People living in the country should be able to practise their religion without any hindrance. And any religion should not be discriminated against on any basis by anyone. If a country like ours doesn’t practise secularism well, it can lead to various conflicts and religious clashes between people.

7. How do I prepare notes for Chapter 2 ‘Secularism’ in Class 8 Civics?

The Chapter 2 ‘Secularism’ in Class 8 Civics revision notes available on Vedantu are absolutely accurate and written to the point. You will get the condensed description of every important topic of Chapter 2 ‘Secularism’ in Class 8 Civics on . The main objective of providing these revision notes to the students is that they can make quick revisions of the chapter whenever they want. These notes are prepared by referring to the NCERT textbooks and you can definitely rely on them for your exams by downloading them on your device from revision notes.