The rituals and customs which were followed by different tribes early on were entirely different. These rituals differed from the ones that were propagated by the Brahmans. Now, these were the societies that were not really characterized by caste-based societies and their divisions. According to the Class 8 History Chapter 4, those who were of the same tribe would share certain common ties which denoted kinship. Also, there was some sort of economic and social differences within the tribes too. 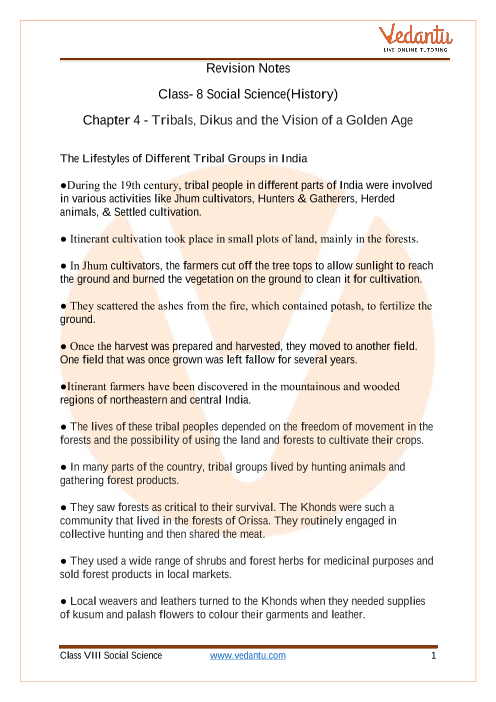 The Lifestyles of Different Tribal Groups in India

Effects on the Tribal Lives due to British Colonial

The Issue of the Traders and Moneylenders

The search for work

Understanding the Lifestyle of Tribal Groups

Who were the Jhum Cultivators?

Most of the tribal people tend to practice Jhum Cultivation. It is a name given to the shifting cultivation. Now, this type of cultivation is practised on certain small patches of the land. The planters would cut down certain treetops in order to guarantee the safe passage of sunlight to the ground so that the vegetation can be cleared for cultivation in the best way. The crops are then ready to be harvested and then were moved to some other field. Most of these cultivators took to the forested and hilly areas of Central and North-Eastern India.

Hunters and Gatherers: Who were they?

There were certain tribal groups that would survive mostly by hunting down different animals and then gathering the forest produce as well. There was a community of people known as the Khonds who would survive on the collective hunting of meat and then the division which happened amongst their own. Khonds would eat the roots as well as the fruits and use the seeds for extracting oil. Also, the herbs and shrubs were used for different medicinal purposes.

Amongst the different tribes, some people used rearing and herding as their primary occupation. These people were pastoralists and moved along with the cattle that they had. Apart from that, some tribal groups began their process of settling down before the 19th century. They settled on the land of Chotanagpur and were known as Mundas. These people of the clan were known to be the descendants of original settlers.

The Impact of Forest Laws During the British Rule

It is not an understatement to say that the lives of the Tribal people were greatly affected due to the new laws of the Forest which came into existence during the British rule. The British people made sure that tribal people were not allowed to enter the forest. However, they also faced a grave problem when it came to finding labourers. In that case, the officials of the Colonial rule came up with certain solutions. They decided that the Jhum Cultivators would be given certain small patches of land in these forests for cultivation in return for services provided to the Labour Department. Most of the tribal groups completely disobeyed those rules. Hence, there were some protests which spread like wildfire in all of the states. This led to several problems during British rule.

To understand the meaning of ‘dikus', students need to go through this chapter for sure. Here, they will be able to answer some different questions about Tribals and Dikus as well. Most of the questions are concerned with the Birsa and their resolves. Also, there are some questions about who are the people referred to as Dikus and so much more. There are some questions regarding the tribal people that stayed during the British rule. We have provided a short summary of the chapter in order to make the concept a little bit clearer for the students.

Q1. What was the Effect of Colonial Rule in Tribal Lives?

Ans. The lives of these people belonging to the tribes changed a lot when the British Rule began. Here we are going to answer a few questions about the changes in people’s lives due to the beginning of Colonial rule.

Q2. What Exactly Happened to Certain Tribal Chiefs During the British Rule?

Ans. According to the Class 8 History Chapter 4 Notes, before the arrival of the British, tribal chiefs were considered to be extremely important. They had more economic power and also the right to control and administer the territories which were under them. However, during the British Rule, the power, as well as the functions for the tribal chiefs, changed a bit as they lost all their power of administration and had to follow certain laws made by the rulers.

Q3. What was the Effect of the British Rule on Jhum Cultivators?

Ans. One of the main goals of the British rule was to ensure that certain tribal groups settled down in the best way. This ensured the control and administration of the British over such peasants. Hence, there were some land settlements introduced by the British in order to ensure that these cultivators would get proper revenue resources in the best way. However, this effort didn’t prove to be very successful as there were widespread protests along in the states.