With the help of the Class 8 History Chapter 5 notes, students can learn more about certain policies and all the people who were behind them. There is also a summary of the sepoys and the peasants, the fight between nawabs and the company. Students will be able to master their knowledge of the chapter with slight assistance from these concept pages. These notes for Chapter 5 are specifically important for students as they can revise these notes and learn more about the chapter very quickly right before their exams. 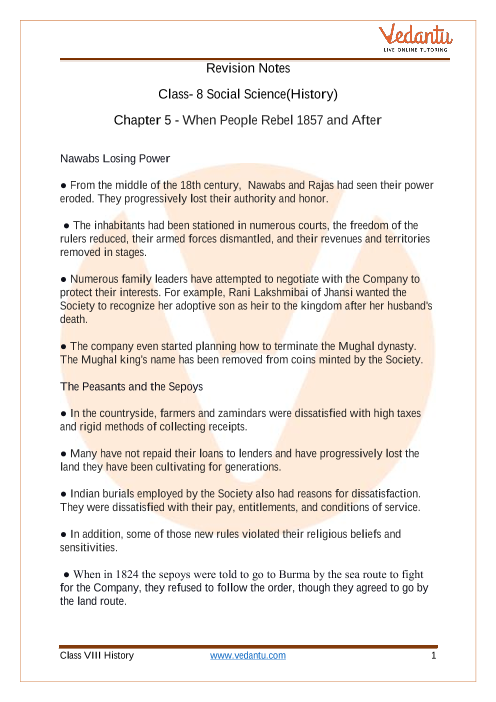 ● From the middle of the 18th century, Nawabs and Rajas had seen their power eroded. They progressively lost their authority and honor.

● The inhabitants had been stationed in numerous courts, the freedom of the rulers reduced, their armed forces dismantled, and their revenues and territories removed in stages.

● Numerous family leaders have attempted to negotiate with the Company to protect their interests. For example, Rani Lakshmibai of Jhansi wanted the Society to recognize her adoptive son as heir to the kingdom after her husband's death.

● The company even started planning how to terminate the Mughal dynasty. The Mughal king's name has been removed from coins minted by the Society.

The Peasants and the Sepoys

● In the countryside, farmers and zamindars were dissatisfied with high taxes and rigid methods of collecting receipts.

● Many have not repaid their loans to lenders and have progressively lost the land they have been cultivating for generations.

● Indian burials employed by the Society also had reasons for dissatisfaction. They were dissatisfied with their pay, entitlements, and conditions of service.

● In addition, some of those new rules violated their religious beliefs and sensitivities.

● When in 1824 the sepoys were told to go to Burma by the sea route to fight for the Company, they refused to follow the order, though they agreed to go by the land route.

● Sepoys also reacted to what was going on in the campaign. A good number of them were farmers and had families in the villages. Thus the anger of the peasants spread rapidly amongst the sepoys.

The English thought it was necessary to reform Indian society. Legislation has been passed to stop the practice of Sati and to encourage widows to remarry.The teaching of English has been actively encouraged.After 1830, the Society allowed Christian missionaries to operate freely in its field and even to own lands and possessions.In 1850, a new statute was adopted to facilitate conversion to Christianity. This law made it possible for an Indian converted to Christianity to inherit the property of his ancestors.

A Mutiny Becomes a Popular Rebellion

● Although the struggles between the leaders and the governed are not unusual, at times such struggles become widespread as popular resistance to the collapse of state power.

● Very many people are beginning to believe that they have a common enemy and are rising against the enemy at the same time.

● After about 100 years of conquest and administration, the English East India Company was confronted by a massive rebellion that began in May 1857 and threatened the very presence of the Company in India.

● Sepoys mutinied in several locations from Meerut and a large number of people from different sections of society arose in rebellion.

From Meerut to Delhi

● On April 8, 1857, a young soldier, Mangal Pandey, was hanged to death for assaulting his officers in Barrackpore.

● Some sepoys of the Meerut Regiment refused to exercise the army using the new cartridges, which were believed to be coated with cow and pig grease.

● Eighty-five sepoys were sent back from the service and sentenced to ten years in prison for disobedience to their officers. That occurred on May 9, 1857.

● The reaction of the other Indian soldiers at Meerut was absolutely amazing. On May 10, the soldiers walked to Meerut prison and freed the imprisoned sepoys.

● The Meerut sepoys drove through the night of May 10 and arrived in Delhi early the next morning. While word of their arrival spread, the regiments stationed in Delhi also rose up in rebellion.

● The Mughal dynasty ruled an enormous part of the country. Most of the leaders and smaller leaders controlled various territories on behalf of the Mughal sovereign.

● After the English were routed from Delhi, there was no uprising during nearly a week. It took all that time to get the new people to travel. Then the outbreak of mutiny began.

● Regiment after regiment mutinied and departed to join other troops at nodes such as Delhi, Kanpur and Lucknow.

● Nana Saheb, the adoptive son of the deceased Peshwa Baji Rao who lived near Kanpur, assembled the armed forces and expelled the British garrison from the city.

● At Lucknow, Birjis Qadr, son of the ousted Nawab Wajid Ali Shah, was proclaimed the new Nawab. He also recognized Bahadur Shah Zafar for his suzerainty.

● In Jhansi, Rani Lakshmibai joined the rebellious graves and fought the English with Tantia Tope, Nana Saheb's general. In the Mandla region of Madhya Pradesh, Rani Avantibai Lodhi of Ramgarh raised and led an army of four thousand against the British who had taken over the administration of her state.

The Company Fights Back

● Troubled by the magnitude of the upheaval, the Company decided to suppress the revolt with all its strength.

● It brought assistance from England, passed new laws so that the rebels could be condemned with ease, and then moved to the storm centers of the uprising. Delhi was recaptured from the rebel forces in September 1857.

● The last Mughal emperor, Bahadur Shah Zafar, was brought to trial and sentenced to life imprisonment.

● Lucknow was captured on March 1858. Rani Lakshmibai was beaten to death in June 1858. A similar fate awaited Rani Avantibai, who, following the initial victory at Kheri, chose to embrace death while surrounded by the British from all sides.

● Tantia Tope fled to the jungles of central India and continued to conduct guerrilla warfare with the support of numerous tribal chiefs and peasants. He was taken prisoner, tried, and assassinated in April 1859.

The British had regained control of the country by the end of 1859, but they were unable to continue to govern the country with the same policies. The major changes made by the British are set out below. The British Parliament passed a new Act in 1858 and transferred the powers of the East India Company to the British Crown in order to ensure more responsible management of Indian affairs. All the country's top leaders have received assurances that their territory will never be annexed in the future. They were permitted to hand over their kingdoms to their heirs, including their adoptive sons. The British chose to abide by the traditional religious and social practices of the Indian people. Policies have been put in place to protect landowners and zamindars and provide them with the security of their rights to their lands.

The People and Their Policies

As the 18th century rolled on by, there were some changes in the policies made. We are going to discuss these policies right now.

The Loss of Power of The Nawabs

There was a time during the mid 18th century when the rajas and Nawabs lost their power and authority over the people. Hence, in order to ensure that their interests were protected, most of the ruling families decided to negotiate some terms with East India Company. For example, Rani Lakshmibai, the Queen of Jhansi, wanted the recognition of her adopted son as the heir after her husband’s death, but the Company rejected that plea.

The Sepoys and The Peasants

Some zamindars and peasants residing in the countryside didn’t want to support these high tax-paying methods and other ways of revenue generation by the Company. This was because most people had to lose their land due to the failure to pay their loans back to some moneylenders. Some of the Indian Sepoys who were employed by the East India Company were not happy about the allowances, pay, and the service conditions that they were subjected to. When these sepoys were supposed to be shipped off to Burma for the war, they refused to go via the sea route but agreed over the land route.

The reformation of Indian society happened when the British started to pass some laws, including the stopping of the practice of Sati tradition. Also, the encouragement of widow remarriage was commissioned by the British. Apart from that, the promotion of English Education happened. It was right after 1830 when the Christian missionaries got the permission to function on their own if they had their domain along with their property and land.

The Beginning of Mutiny and The Rebellion

In March 1857, the East India Company faced one of the biggest rebellions when people rose against one common enemy. The rebellion began in Meerut and was led by several members of different communities. This rebellion was definitely considered to be one of the largest and the most effective armed resistance against colonialism.

The Spread of The Rebellion

The rebellion spread from Delhi when there was no uprising from the British. There were many regiments that were a part of the mutiny from Kanpur, Delhi, and Lucknow. Armed forces were gathered on behalf of Nana Saheb, who named himself as the next Peshwa after the death of his predecessor and father, Peshwa Baji Rao. The Queen of Jhansi fought alongside Tantiya Tope, who was also Nana Saheb’s General. There were a number of different battles where the British had to accept defeat.

However, the East India Company soon brought some reinforcements and support from England. New laws were passed in order to capture and convict all of the rebels. In the year 1857 September, Delhi was under capture and the emperor at the time, Bahadur Shah Zafar was imprisoned for life.

Lucknow came under the capture of the British in March 1858 with the defeat and death of Rani Lakshmibai in June 1858. There were many other martyrs such as Rani Avantibai who chose to face death at the time of being surrounded by British forces. After the rebels were defeated, the British planned on providing rewards for winning the loyalty of the people. They vowed to spare the people who would surrender and promised to provide safety to those who had not killed any white people during the rebellion.

The Aftermath of The Rebellion

By the time 1859 came around, the country was again under the control of the British. Also, some necessary changes were made during the rule. Students can find more details in the Class 8 History chapter 5 notes.

1. What Demand was made by the Queen of Jhansi Rani Laxmi Bai that the British Refused?

Answer: The demand was made by the Queen of Jhansi Rani Laxmi Bai that the British refused was to accept the adopted son of hers as the successor of the King’s throne after her husband’s death.

2. How was the Last Few Years of Life for Bahadur Shah Zafar?

Answer: The last few years for Bahadur Shah Zafar were very pathetic as he was imprisoned by the British and sent to Rangoon jail where he died.

Answer: The Revolt of 1857 first began from Meerut.