How, When and Where Class 8 Notes History Chapter 1 - PDF Download

History is more about change than just two kings fighting over a piece of land if you think about it. History has always been about the next evolution, which leads to modernism, which we see now all around us. Indeed history is about significant events such as wars between the two nations, battles between massive armies. Still, in truth, it is also about small things that completely changed the world. Like the wheel's invention, it was not a big deal back then as most people don’t know what to do with it. But now, in the 21st century, we can’t think of our lives without wheels.

Today we will be showing you how history is important and why, and how you need to study it based on the events that have happened. Class 8th history chapter 1 is quite a unique chapter as it puts a light on history as a whole and does not focus on a single event that happened to occur in that time. . 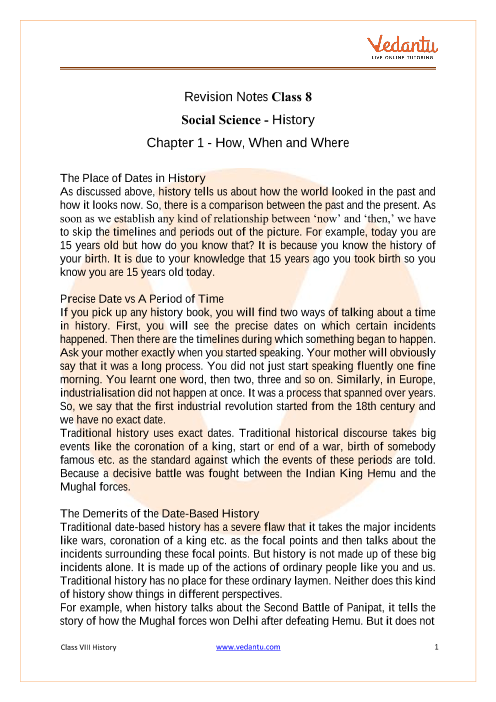 In this chapter, students will learn that earlier people were using history as a synonym for the dates. Also, students will get to know about the perspective of the old historians who used to dive deep into the dates of the battles and who won them. But modern historians have changed everything. Modern-day historians try to look for the change that has happened and how it was initiated and what led to its initiation.

This chapter's writer breaks the history into two periods to make students understand the characteristics of time and other central features as students read through the chapter pages. Moving apart from the British classification of Indian history, which was generally divided into Ancient, Medieval, and Morden. In ancient times and even now, Brirshters used to believe in writing down the things which they feel are essential. Every instruction led out by the British empire, every plan, policy, decision, and agreement used to be written up to be taken as evidence if the time comes to present it to other people.

When, Where, And How Class 8 Summary

In 1817, a British writer named James Mill published a three-part book with the title A history of British India. In his book, James Mill divided Indian history into three parts. The Hindu, Muslim, and British. According to Mill, every Asian community has a lower level of civilization than the people living in European countries. In his book, he described before Britishers came to India, Hindu and Muslim disputes used to rule the country. You can see the religious intolerance among the different communities. Also, there was an issue of cast taboo and the practising of the superstitions which dominated the social life of the people living in India.

In his writing, he said that during the British rule, the Indian community became more civilized. His vision of Indian history with Britisher was meant to be progressive and civilized.

Facts Which You Need to Know

There are many things that the government official papers still hide, and things that are not written anywhere. The official statement will never justify the common people's reaction when the Britishers first came to India and started taking over the power from the common man. If you can find the diaries of the people who used to live in that time, you will get to know the British empire's real face in India.

You might think history can be traced from the autobiographies of essential persons like Mahatma Gandhi, but that’s not true. During the writing and its first draft, the people know millions of people will read it. As a result, there are a lot of things that are hidden. The real history of a nation hides in the letter a man sends to his wife. It hides in the diary a small kid writes every day. The stories from the tribes, peasants, the workers who used to work in the mine, history hides in their stories.

1. Why is it important to study history?

When students get to learn about history, they will be able to make better decisions and better understand the world in which they are living. In addition to this, students will get to know how history has impacted their present lives and how the laws came into existence that protect them from fraud and criminals.

Likewise, history is filled with wars and religious crime. When students go through history, they will start appreciating their present living conditions. For many people studying history means studying the change which came year after year and led human civilization to the modern world that we see around us today. With history, we explain the things of the past, and history gives us the pattern that we might miss today that can lead to dangerous outcomes if they are not treated

The concept of colonialism is quite old. It is said to take over the control of an independent area or group of people by one power. Most of the time, we can see the marks of colonialism in our history. When one nation subjugates another, conquering its total population and defeating its army to rule over them. In addition to this, when colonialism occurs, the country that took over the power makes it compulsory for the local people to learn their language and cultural values.

If you look at the world map in 1914, you can see most of the world has been colonized by Europeans at some point or the other. The concept of colonialism can be found in the fall of imperialism. Egypt and Rome are the prime examples of colonialism in the early stages of history. They tried to take over their neighbouring states' power to increase their power by taking their men for the army.