The vertical division of power between various levels of government is one of the main forms of power-sharing in modern democracies. This Class 10 Social Science Political Science Chapter 2 Federalism focuses on that very type of power-sharing. It is usually known as federalism. The chapter starts by explaining federalism in general terms, the principles and methods of federalism in India. The discussion of federal constitutional provisions is followed by a discussion of politics and policies that have reinforced federalism in practice. Our local government, a unique and third level of Indian federalism is also discussed here. 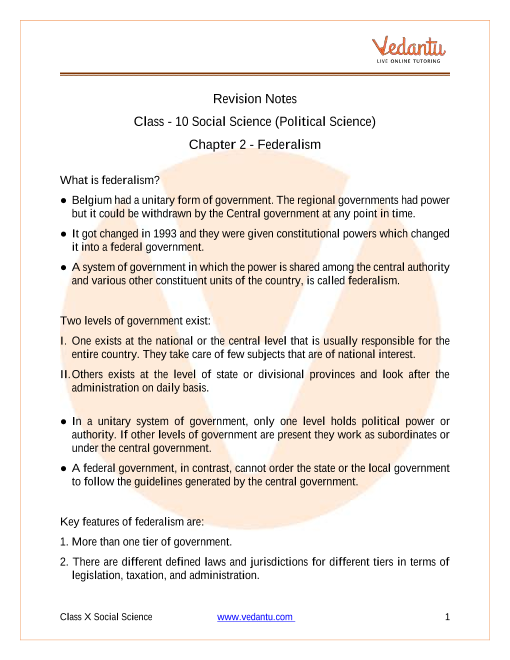 Some of the main characteristics of federalism are:

What Makes India a Federal Country?

How is Federalism Practised?

The true success of federalism in India is credited to its nature of democratic politics.  Let us look at some of the important ways through which federalism is practiced in India.

The establishment of linguistic states was perhaps the most important exam for the democratic politics of India. From 1947 to 2017, many original states have disappeared and several new states were formed. Areas, borders, and names of States were changed. Some States were made up of people who speak the same language. These were known as linguistic states.

Restructuring the relationship between the Center and the State is yet another way in which federalism was strengthened in practice. If no single party has a clear majority in the Lok Sabha, major national parties could join forces with other parties, along with several regional parties, to form a coalition in the Centre.

When authority is transferred from the central and state governments and granted to local governments, it is called decentralization. The core principle behind the decentralization system is that there are a large number of issues that are best addressed at the local level. Local people also can participate directly in the decision-making process.

A huge step towards decentralization was taken in 1992. The Constitution has been modified to make the third-tier of the democratic system more powerful and effective. These are the main features of this democracy:

The local rural government is commonly known as Panchayati Raj. Every village, or group of villages in certain states, has a gram of panchayat. It is a council comprising numerous ward members, often called 'Panch', and a president or 'Sarpanch'. They are elected directly by all adults living in a village or town. Gram Panchayat is the decision-making organ for the whole village.

The Panchayat operates under the supervision and control of the Gram Sabha. All the voters in the village are members of it. It must hold meetings at least two to three times a year to authorize the yearly budget of the gram panchayat and to monitor the performance of the gram panchayat.

All the Panchayat Samitis or Mandals in a district together make up the Zilla (district) Parishad. Members of the Lok Sabha district, MLAs of the district, some other representatives of other district-level organs are members of Zilla Parishad.

1. Describe India as a Federal Nation.

The constitution of India has effectively established a federal state of government. We have various levels of government, the government in the center, which is the Lok Sabha and the Rajya Sabha. Then there are the various state governments, the Vidhan Sabhas and the Vidhan Parishad. And finally, there are the Municipal Corporations and the Panchayats, which are forms of local governance.

2. How are Federations Formed?

Answer: Two factors are essential for the institutions that practice federalism: mutual trust between various levels of government and a consensus to live together. There are two ways primarily through which federations have been formed.