In most Indian villages, an independent authority manages the working of the town and has the power of decision-making. The panchayat raj has been running for ages and follows age-old customs. Our subject experts have complete knowledge about this age-old system and design the Panchayati Raj Class 6 notes. These notes of functions of Gram Panchayat Class 6 cover topics like what happens when the representatives are elected by the people, what and how discussions are made, etc. By going through NCERT Solution Chapter 5 of Class 6 describes the Gram Sabha, students can learn and revise these topics.

NCERT Solutions for Class 6 Social Science The Earth Our Habitat

NCERT Solutions for Class 6 Social Science History - Our Past

NCERT Solutions for Class 6 Social Science The Earth Our Habitat 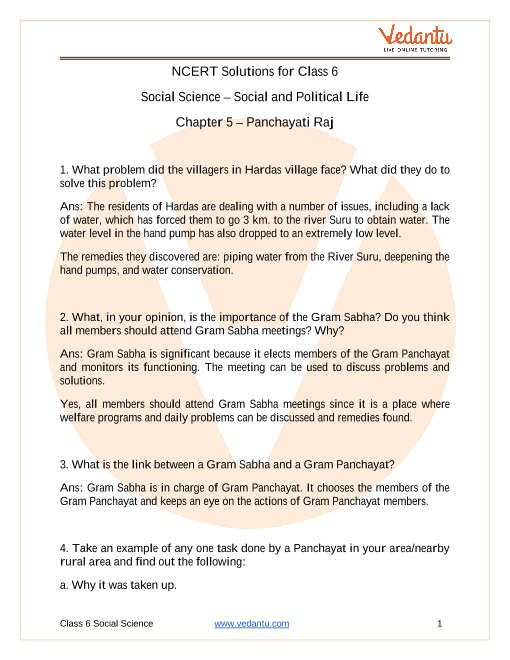 1. What problem did the villagers in Hardas village face? What did they do to solve this problem?

Ans: The residents of Hardas are dealing with a number of issues, including a lack of water, which has forced them to go 3 k.m. to the river Suru to obtain water. The water level in the hand pump has also dropped to an extremely low level.

The remedies they discovered are: piping water from the River Suru, deepening the hand pumps, and water conservation.

2. What, in your opinion, is the importance of the Gram Sabha? Do you think all members should attend Gram Sabha meetings? Why?

Ans: Gram Sabha is significant because it elects members of the Gram Panchayat and monitors its functioning. The meeting can be used to discuss problems and solutions.

Yes, all members should attend Gram Sabha meetings since it is a place where welfare programs and daily problems can be discussed and remedies found.

3. What is the link between a Gram Sabha and a Gram Panchayat?

4. Take an example of any one task done by a Panchayat in your area/nearby rural area and find out the following:

Ans: The task was to find the permanent solution of the problem of open defecation in the village called Rela.

5. What is the difference between a Gram Sabha and a Gram Panchayat?

Ans: Following are the main differences between Gram Sabha and Gram Panchayat:

Nimone is a village on the Chaufula-Shirur Road. Like many others, this village has also been facing a severe water shortage for the last few months and villagers depend on tankers for all their needs. Bhagvan Mahadeo Lad (35) of this village was beaten with sticks, iron rods and axes by a group of seven men. The incident came to light when some villagers brought a badly injured Lad to hospital for treatment. In the FIR recorded by the police Lad said that he was attacked when he insisted that the water in the tanker must be emptied into the storage tanks constructed as part of the water supply scheme by Nimone Gram Panchayat so that there would be equal distribution of water. However, he alleged that the upper caste men were against this and told him that the tanker water was not meant for the lower castes.

7. Find out more about watershed development and how it benefits an area?

Ans: The government has launched the Watershed Development Program. It is carried out by non-governmental organization (NGOs). It helps to conserve water by planting trees, building bunds, and canals, among other things.

Gram Panchayat holds the responsibility to implement decisions for the town or village. The decision, which is approved by the gram sabha, is taken for the betterment of the town and town. Some of the responsibilities of gram panchayat include-

Students while accessing these notes will get to know the functions of gram panchayat class 6 chapter 5.

In rural areas of India, there are different levels of gram panchayats, which governs the working of the village for its betterment. The panchs hold the responsibility to answer the gram sabha and are the members of Gram Sabha elected them. There are two different levels- Block Level called Janpad Panchayat or Panchayati Samiti with many gram panchayats falling under it.

Above the Panchayat Samiti is the District Panchayat or the Zilla Parishad who holds the responsibility to make development in the town or village. The body also regulates money distribution among the gram panchayats.

Throughout chapter 5 of panchayat raj, students are given an understanding of how the body works and the laws that govern the body.

CBSE students who are looking for the Panchayati raj class 6 notes; can get it in PDF format. This PDF format is easy to download and study. You can download and practice anytime, anywhere. Right from the meaning and functions of gram panchayat class 6 chapter, everything is available at one click.

1. What are the Critical Functions of Gram Sabha?

Gram Sabha is a vital body that takes the majority of the village decisions.  It is also responsible for the identification or selecting of persons under the poverty alleviation. Some of the critical functions of Gram Sabha are:

2. What is the Role of Sarpanch in Gram Sabha?

Sarpanch is the head and essential member of the gram sabha. He/she is responsible-

3. What Powers are Given to Gram Sabha Under PESA Act?

Under 'The Provisions of the Panchayats' 1996 Act, there are certain powers given to the Gram Sabha. These include-

4. Will Vedantu’s NCERT Solutions for Chapter 5 of Class 6 Social and Political Life be acceptable in my exams?

The major aim with which Vedantu's expert teachers prepare NCERT solutions for Chapter 5 of Class 6 Social and Political Life is to coach the students for their CBSE Examinations.  Each solution is prepared to keep in mind the marking scheme and pattern of CBSE exams. The solutions are also regularly updated to complement the latest syllabus by CBSE. Hence, when you choose Vedantu's NCERT Solutions to be your study partner, you can be assured that you have chosen the most reliable and authentic solutions available online.

5. What is the Panchayati Raj System according to Chapter 5 of Class 6 Social and Political Life?

Panchayati Raj is a special self-governance system in rural India as opposed to the urban administration. It is one of the oldest local governance systems found in India. It is the first level of democratic government in India. This system of governance is present in all Indian states except Nagaland, Meghalaya, and Mizoram, all Union Territories except Delhi. It enables the people to participate in the decision-making process of their own government.

6. Why was Bhagavan beaten according to Chapter 5 of Class 6 Social and Political Life?

Bhagavan is a resident of Nimone village which had been facing an acute water shortage. The villagers depended on water tankers for their water supply needs. When Bhagavan insisted that the water from the tankers be emptied in the water storage tank as per the water supply scheme by Nimone Gram Panchayat for equal distribution of water, he was beaten by upper caste men of the village. This is a vivid example of caste inequalities that still persist in our country.

7. Where can I download CBSE Class 6 NCERT PDF Solutions for Political Science Chapter 5?

If you have Vedantu's app installed on your phone, you can also download these solutions from the app. Both these methods are simple and cost you nothing.

8. How many chapters are there in Class 6 Political Science textbook apart from chapter 5?

The Class 6 NCERT textbook for Political Science called “Social and Political Life - I” consists of a total of nine chapters, namely:

You can access the NCERT Solutions and comprehensive explanations of all the above-mentioned chapters here.

The Earth Our Habitat
History - Our Past