NCERT Solutions for Class 7 Social Science and Political Life Chapter 1 is one of the most important and sought-after study materials by students. CBSE Class 7 Political Science Chapter 1 notes are prepared by Vedantu’s best Social Science teachers. The solutions contain the answers to every important question for the examination. The solutions aim to enhance the basic understanding of students. You can start your preparation by simply downloading the Civics Ch 1 Class 7 free PDF solutions. NCERT Solutions are provided to make the study easy and interesting for students on Vedantu. You can even get access to NCERT Solution for subjects like English, Maths and Hindi to help your study become simple. 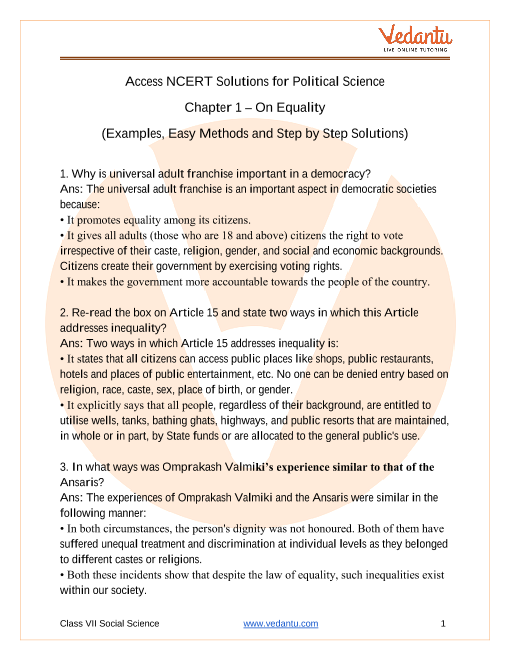 1. Why is the Universal Adult Franchise Important in A Democracy?

Ans: The universal adult franchise is an important aspect in democratic societies because:

(a) It promotes equality among its citizens.

(b) It gives all adults (those who are 18 and above) citizens the right to vote irrespective of their caste, religion, gender, and social and economic backgrounds. Citizens create their government by exercising voting rights.

(c) It makes the government more accountable to the people of the country.

2. Re-Read the Box on Article 15 and State two Ways in Which this Article Addresses Inequality?

Ans: Two ways in which Article 15 addresses inequality is:

(i) It states that all citizens can access public places like shops, public restaurants, hotels and places of public entertainment, etc. No one can be denied entry based on religion, race, caste, sex, place of birth, or gender.

(ii) It explicitly says that all people, regardless of their background, are entitled to utilise wells, tanks, bathing ghats, highways, and public resorts that are maintained, in whole or in part, by State funds or are allocated to the general public's use.

3. In What Ways Was Omprakash Valmiki’s Experience Similar to That of the Ansaris?

Ans: The experiences of Omprakash Valmiki and the Ansaris were similar in the following manner:

(i) In both circumstances, the person's dignity was not honoured. Both of them have suffered unequal treatment and discrimination at individual levels as they belonged to different castes or religions.

(ii) Both these incidents show that despite the law of equality, such inequalities exist within our society.

4. What Do You Understand By the Term “All Persons are Equal Before the Law”? Why Do You Think It Is Important in a Democracy?

Ans: The term ‘all persons are equal before the law’ means that every citizen, irrespective of caste, religion, race, place of birth, or gender, is entitled to all the constitutional rights and freedom without being discriminated against. It is a founding aspect of democracy that ensures that the government will take care of the needs of all the citizens of the country. It will safeguard the interests of people and ensure that all have access to public resources.

5. The Government of India Passed the Disabilities Act in 1995. This Law States that Persons With Disabilities Have Equal Rights and That the Government Should Make Possible Their Full Participation in Society. The Government Has to Provide Free Education and Integrate Children With Disabilities Into Mainstream Schools. This Law Also States That All Public Places Including Buildings, Schools, Etc., Should Be Accessible and Provided With Ramps. Look at the Photograph and Think About the Boy Who is Being Carried Down the Stairs. Do You Think the Above Law is Being Implemented in His Case? What Needs to Be Done to Make the Building More Accessible For Him? How Would His Being Carried Down the Stairs Affect His Dignity As Well As His Safety?

Ans: No, the Disabilities Act is not being followed in the picture shown. This is a violation of Article 15 because as per the article physically disabled persons should be able to access public places. Buildings must be accessible, have proper ramps, and other required measures. The way the boy is being carried down the stairs is unsafe. Carrying the wheelchair might result in imbalance and cause physical injury to the boy. Moreover, it affects his dignity as he becomes dependent on others for mobility.

This “charity based” approach will have a negative impact on the boy’s mind and will impact his sense of independence. It is important to address these needs and replace the charity model with a ‘rights-based ’ approach i.e., all persons should have an equal share of use of the public resources. The government should ensure that people with disabilities are also able to access public resources with ease.

Equality in the Indian Democracy

The Constitution of India gives the right to equality to all the citizens of the country. It is through the experiences of Kanta, Omprakash Valmiki and the Ansaris which introduced the concept of dignity. It has achieved on focusing on social movements as well as highlighting creative ways (writings, songs, poems) to express their demands on equality.

Equality in Right to Vote

The article 326 in the Indian Constitution states the Universal Adult Franchise as an essential part for the elections. It refers to those people who are 18 years and above have the right to vote, take participation in the election irrespective of their caste or religion.

When the people of the country are treated differently or unequally, their dignity is violated. The dignity of both Omprakash Valmiki and Ansari were violated. He was picked up and made to sweep the school because of his caste. Omprakash Valmiki’s classmates and teachers used to hurt his dignity, and he was made to feel low than other students. It was his father who got angry about seeing such a situation and the treatment his son got. These people do not deserve to be served in this manner. They also deserve the same dignity as any other citizen.

Vedantu helps you become a quick learner and better prepared with its researched notes. NCERT Solutions for Class 7 SST Civics Chapter 1 are aimed to make students’ learning easy and enjoyable. Not just Social Science, Vedantu has experienced teachers of different knowledge backgrounds. The website creates a perfect platform for the students who want to gather knowledge directly from some of the best tutors of the nation. The expert tips and advice are essential for the CBSE examinations.

Over the past years, Vedantu has become one of the trusted and top educational websites. Here, the students get the chance to interact directly with the best teachers. You can not only download NCERT Solutions PDF for free for each subject but also can learn from the live webinars conducted by some of the great teachers in the education industry.

Q. Why Is the Universal Adult Franchise Important in the Democracy?

Answer: Universal adult franchise is essential in the democratic societies for the following reasons:

Q. In What Ways Are Omprakash Valmiki’s Experience Similar to That of the Ansaris?

Answer: The experience of Omprakash Valmiki and Ansaris were similar in the following ways:

The Disabilities Act was one of the most important act passed in 1995 by the government of India. The law plays a crucial role in maintaining the equality of the country. People with different disabilities often face discrimination and inhuman behaviour. It was against the rights of the democratic country. So, the government thought it was essential to look into this matter. According to the Disabilities Act of 1995, citizens with disabilities have equal rights like other people, and they should take full participation in society. As per the Disabilities Act 1995, persons should have equal rights, opportunities and protection. This came into force from February 7, 1996. The government has to provide them with free education and also integrate children with disabilities into regular schools.

Rosa Parks, who was an African-American woman, had refused to give up her seat on a bus for a white man on December 1, 1995 as she had a tiring day. The refusal started a massive agitation against the unequal ways in which African-American were treated, and this movement came to be known as the Civil Rights Movement.

The Civil Rights Act of 1964 came into being which prohibited discrimination based on religion, race or national origin of a citizen. It stated that the schools would also be opened for African-American children, and they could no longer have to attend separate schools.

Our Pasts-2 (History)
Our Environment (Geography)