In a diverse democratic society such as India, there are several instances present that portray prejudice and discrimination of certain communities. Therefore, there always must be a platform which enforces the rights of individuals and provides equality to all. The Class 7 civics chapter 1 notes help students in building a strong understanding of what is equality in Indian Democracy and how it must be executed. The role towards enforcement of equality portrays the formation of laws that should be properly conformed to by the executive power of democracy which can at times also make mistakes. Therefore forming strong opinions regarding the significance of the right to equality is very important for students. 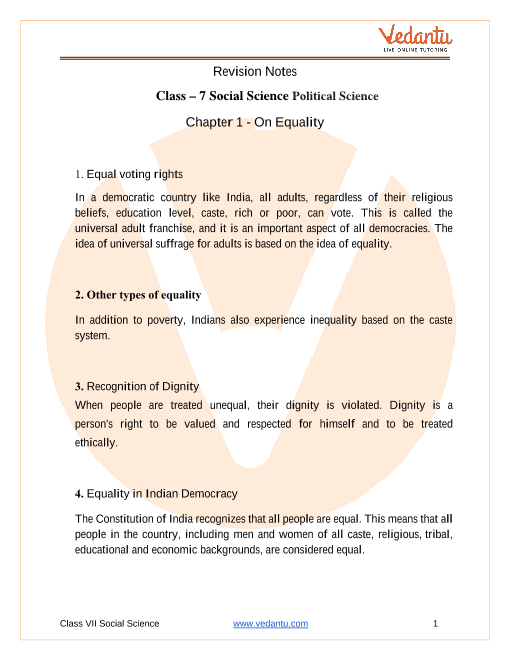 The regular functioning and enforcement of democracy require the issue of equality along with equal protection of rights.

The first chapter of civics regarding democracy and equality class 7 entails the various aspects and grounds on which discrimination relating to equality takes place. It aims to explain the different basis of confirming equality amongst all citizens within the Indian Democracy.

The equality in regards to the right to vote involves the inclusion of the universal adult franchise which in the most basic sense refers to the ideology of 'one person, one vote' for every citizen who has reached the age of 18. This idea provides meaning to equality before the law by treating every citizen equally regarding the decision-making process of election of certain people who govern the country.

Democracy chapter 1 class 7 CBSE starts by recognizing the dignity of every individual residing in the country. The dignity of a person is situated at the heart of the understanding of equality. This is because of the reason that when an individual is discriminated against on the ground of equality, their dignity gets affected at a person and moral level. Therefore, to reach equality before the eyes of the law, everyone must be treated ethically where the person's dignity is not harmed.

Article 14 of the Constitution of India provides for equality and non-discrimination based on all genders, caste, economical backgrounds, educational backgrounds, tribes, and religions. It precludes the provisions of equality of each person before the law, and that no person shall be discriminated against based on the aforementioned grounds, that every individual has access to public places, and finally the abolishment of untouchability.

However, numerous cases have emerged over the decades that provide instances of discrimination based on equality. In India, discrimination on the basis caste is highly prevalent. In such an instant, the people belonging to "lower castes'' are set aside from all other castes and are treated with extreme inequality even today. They face multiple problems and difficulties through the span of their lives. Such instances are against the very institution of the Constitution of India and should be reported and abolished from their very origin.

The government of India executes the idea of equality through enforcement of laws along with government schedules as well as programmes such as the mid-day meal programme, etc.

Challenges Faced by Equality on Other Democracies of the World

Even in the current world, numerous democratic countries around the world face the challenge of conforming to the right to equality before the law. This can be understood by understanding the example of racism towards African-American communities within the USA which are largely discriminated against and which face huge difficulties throughout their lives. Such discrimination overlaps the right to equality based on any race.

These notes are written by some of the expert teachers in the field in a very lucid manner for easy comprehension by students. They make it easier for a student to effectively prepare for exams and give special consideration of more difficult areas.

1. What is the significance of the Universal Adult Franchise?

Universal adult franchise is relevant for the following reasons:

2. What does article 15 of the Constitution entail?

There shall be no discrimination on grounds of religion, race, caste, sex or place of birth under article 15 of the constitution of India. This includes two forms,

Firstly, there shall be no discrimination against any person solely based on religion, race, caste, sex, place of birth or any of them and such right shall be protected by the state.

Secondly, no resident of the country, be subject to any disability, responsibility, limitation or condition on the grounds of faith, race, caste, sex, place of birth or any of them, concerning the following:

3. What is a democratic government Class 7 Political Science Chapter 1?

4. What were the effects of starting midday meals in elementary schools?

5. How is the importance of equality explained in Class 7 Political Science Chapter 1?

Equality plays an important role and it has been recognized in the constitution of India through different laws. According to equality, every person of India is treated equally before the law. All the citizens of India have to follow the same laws, rules, and regulations. No discrimination can be made based on caste, colour, creed, sex, or region. No person can be stopped from entering public parks, malls, cinema halls, etc. Thus, equality means that every person has the same rights in a democratic country like India.

6. How was Kanta unsure about equality?

7. Write down the differences between a private hospital and a government hospital?