There are many instances that have shown the world how people have struggled to get what they deserve. The struggles and movements earmark the power of the common. To commemorate such movements in history, Chapter 5 Civics Class 10 syllabus has been depicted. Students should know why people have chosen to revolt and get what they deserve. To understand the depth of all the movements in this chapter, you need to follow the answers in NCERT Solutions for Class 10 Civics Chapter 5. It will become easier for you to prepare the chapter and understand the intention behind adding this content to the syllabus. You can download Class 10 Political Science Chapter 5 solutions PDF file and frame the right answers for the questions in the exercise. With Vedantu’s NCERT Solution free PDF, you can have more flexibility in your study schedule. Subjects like Science, Maths, English,Hindi and Social Science will become easy to study if you have access to NCERT Solution for Class 10 Science, Maths solutions and solutions of other subjects. You can also download NCERT Solutions for Class 10 Maths to help you to revise complete syllabus and score more marks in your examinations. 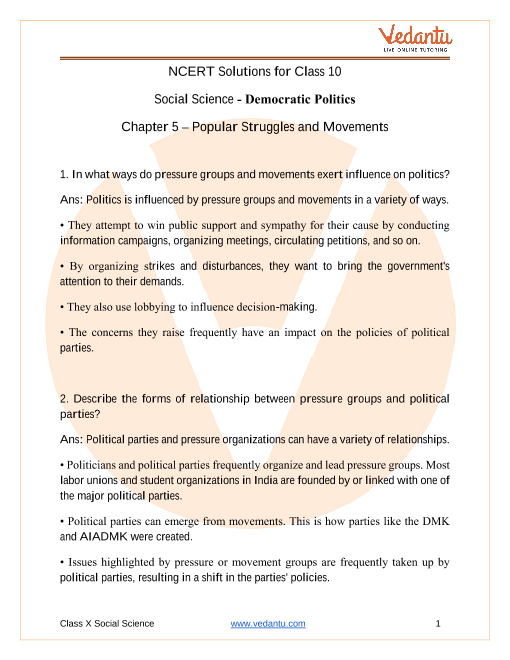 1. In what ways do pressure groups and movements exert influence on politics?

Ans: Politics is influenced by pressure groups and movements in a variety of ways.

• They attempt to win public support and sympathy for their cause by conducting information campaigns, organizing meetings, circulating petitions, and so on.

• By organizing strikes and disturbances, they want to bring the government's attention to their demands.

• They also use lobbying to influence decision-making.

• The concerns they raise frequently have an impact on the policies of political parties.

2. Describe the forms of relationship between pressure groups and political parties?

Ans: Political parties and pressure organizations can have a variety of relationships.

• Politicians and political parties frequently organize and lead pressure groups. Most labour unions and student organizations in India are founded by or linked with one of the major political parties.

• Political parties can emerge from movements. This is how parties like the DMK and AIADMK were created.

• Issues highlighted by pressure or movement groups are frequently taken up by political parties, resulting in a shift in the parties' policies.

3. Explain how the activities of pressure groups are useful in the functioning of a democratic government.

Ans: Pressure organizations aid in the consolidation of democracy. Putting pressure on the rulers is not a bad thing in a democracy as long as everyone has the opportunity. Governments are frequently subjected to unfair pressure from a small group of wealthy and influential individuals. Pressure organizations play an important role in opposing this undue influence by reminding the government of regular individuals' needs and concerns.

4. What is a pressure group? Give a few examples.

Ans: A pressure group is an organization that uses rallies and demonstrations to try to influence government decisions. Pressure groups arise when people with similar viewpoints band together to achieve similar goals. FEDECOR and BAMCEF are two examples of pressure groups.

5. What is the difference between a pressure group and a political party?

Ans: A pressure group is an organized or unorganized body that attempts to promote its own objectives. They battle to attain a common goal. Political parties run for office in order to gain political power. They have multiple interests, as well as their own ideology. They represent varied interests and each has their unique method of achieving their goals.

6. Organisations that undertake activities to promote the interests of specific social sections such as workers, employees, teachers, and lawyers are called _____________ groups.

7. Which among the following is the special feature that distinguishes a pressure group from a political party?

(a) Parties take political stances, while pressure groups do not bother about political issues.

(b) Pressure groups are confined to a few people, while parties involve a larger number of people.

(c) Pressure groups do not seek to get into power, while political parties do.

(d) Pressure groups do not seek to mobilise people, while parties do.

Ans: (c) Pressure groups do not seek to get into power, while political parties do.

8. Match List I (organisations and struggles) with List II and select the correct answer using the codes given below the lists:

9. Match List I with list II and select the correct answer using the codes given below the lists:

10. Consider the following statements about pressure groups and parties.

A. Pressure groups are the organised expression of the interests and views of specific social sections.

C. All pressure groups are political parties. Which of the statements given above are correct?

This is an excellent chapter to study in the SST Class 10 syllabus. It includes the different kinds of struggles humans did in the form of reform movements to fight for their right and get what they deserve. The first instance is the Nepalese movement for making the country a democracy. They struggled to free the country from the monarchy. As per NCERT Solutions of Chapter 5 Civics Class 10, It did not come to an end very quickly. They had to oppose the decisions made by the contemporary kings and finally get what they demanded. When you study Popular Struggles and Movements Class 10 Solutions, you will find how the entire country came on the streets to demand democracy and a parliamentary constitution.

The second part of Ch 5 Civics Class 10 depicts the Bolivian struggle where water was privatized due to the forceful decision implemented by the World Bank. This small Latin American country showed the World Bank the real power of the common people. The labour and human rights’ team maintained a four-day strike. The authority then agreed to negotiate but nothing fruitful happened. If you follow the Class 10 Politics Popular Struggles and Movements NCERT Solutions, you will learn that the Bolivian people again went on strike, forced the government to accept all their demands, and make water, the basic right of all animals, free again. This chapter holds two excellent examples of mass movement due to any conflict with the regulatory authority or the ruling government. It shows how powerful the unity of common people can be that shook the big names holding commendable positions in the world.

Why Should You Prefer NCERT Solutions for Class 10 Social Science Civics Popular Struggles and Movement?

Previously, we have studied the movements and struggles to earn freedom from colonial rule in India. This chapter is somewhat different from the kind. It shows how a country shook its ruling power when an abrupt decision is taken. The two examples in this chapter show how people should unite when the decisions made by the ruling bodies are not at all up to the mark. In fact, the Nepalese movement shows how people understood they need a democratic constitution, not nepotism of the royal family. Chapter 5 Civics Class 10 NCERT Solutions will help you grab the idea properly so that you can answer the questions accordingly.

Following the NCERT Solutions for Class 10 Social Science Civics Chapter 5 will also help you to prepare the chapter within a short period. You will be able to understand how the answers should be framed so that you can score better in the exams. Class 10 Civics Chapter 5 NCERT Solutions have been framed by the top teachers of Vedantu using simple language so that every student can understand the answers well.

1. How can you Prepare Chapter 5 Using the Popular Struggles and Movements Class 10 NCERT Solutions?

Once you are done reading the chapter, you can proceed to the exercise and follow the Ch 5 Civics Class 10 NCERT Solutions to frame the answers. You can download this solution and practice on your own. In this way, you can prepare this chapter perfectly.

2. What Does People’s Movement Represent?

The two examples used in this chapter show that people know what is best for them. When a decision is made by the supreme body, it should be on the side of the common people. The movements took place when the common people understood what is necessary and good for them. Follow Chapter 5 Political Science Class 12 NCERT Solutions to understand this concept better.

3. Why Should You Prefer Vedantu for the NCERT Solution of Political Science Class 10?

Vedantu offers the best online study platform for all subjects. Quality answers in the NCERT Solutions for Class 10 Popular Struggles and Movements will make your preparation better.

4. How are the NCERT Solutions for Chapter 5 of Class 10 Democratic Politics Social Science prepared by Vedantu ?

Vedantu's NCERT Solutions for Chapter 5 of Class 10 Democratic Politics Social Science are prepared by highly talented teachers. They prepare these solutions after thorough and meticulous research. These teachers have years of experience teaching Democratic Politics in CBSE schools. They understand the requirements of Class 10 students especially. These maestros prepare these solutions after going through a tireless process of analyzing the CBSE syllabus, Board question papers, and latest guidelines by the CBSE. Only after strict scrutiny, these solutions are published to be used by the students. The solutions or any study material provided by Vedantu is absolutely free of cost.

5. What will we learn in Chapter 5 of Class 10 Democratic Politics Social Science?

6. Can I use the Solutions provided by Vedantu for Chapter 5 of Class 10 Democratic Politics Social Science for board exams?

Yes, you can indeed use Vedantu's NCERT Solutions for Chapter 5 of Class 10 Democratic Politics Social Science while preparing for the CBSE Board examinations. In fact, you can replicate these exact solutions in your board examination. Vedantu's Solutions for Class 10 students are formulated to prepare the students to write well-suited answers in examinations. Writing well-formed answers that can impress the examiner is key to scoring high marks in the CBSE Board exams. With Vedantu, you can definitely learn the skill of writing perfect answers in no time.

7. What does Bolivia’s water war teach us according to Chapter 5 of Class 10 Democratic Politics Social Science?

Bolivia's water war is a significant example of how struggles do not end with the establishment of democracy. In fact, they are crucial to the working of a democracy. The people of Bolivia successfully protested against the privatization of water in their country. The struggle pressured the government to withdraw the contract for the privatization of water with an MNC. Had the people not protested they would have had to pay an exorbitant amount of money for water. Being a low-income country, this would be disastrous for them.

8. Give an example of a situation where a political party grew out of a movement from the information in Chapter 5 of Class 10 Democratic Politics Social Science?

It happens at times that political parties grow out of popular movements. Asom Gona Parishad was formed when the Assam movement led by students against the ‘foreigners’ came to an end. Political parties like the DMK and the AIADMK in Tamil Nadu have also originated following a long-drawn social reform movement during the 1930s and 1940s.

Another recent example is the formation of the Aam Aadmi Party (AAP) which has its origins in the “India Against Corruption” movement of 2011.