Introduction to States of Matter

The bulk properties of matter, i.e the properties of matter that we are familiar with, are represented by the characteristics of chemical systems with which we are familiar. Properties are associated with a large number of items like a collection of atoms, ions, or molecules. A liquid's molecules do not boil, but the bulk does. Water molecules in a collection have wetting properties; Molecules do not wet on their own. Ice is a form of water. It can exist as a solid, as a liquid, or in a gaseous state. Water vapour or steam in a gaseous state. Ice, water, and steam can have very different properties. In the chemical composition of water in all three states, H2O continues to be the same.

Important Topics of States of matter

The forces of attraction and repulsion between interacting particles are known as intermolecular forces (atoms and molecules). This phrase is used to describe does not take into account the electrostatic forces that exist between the two ions with opposing charges and the forces that hold a molecule's atoms together.

(a) Dispersion Forces or London Forces

We spend our entire lives immersed in the ocean of air, which is made up of a variety of gases. We spend our lives in the troposphere, the lowermost layer of the atmosphere that is held to the earth's surface by gravitational force.

The physical properties that define the gaseous state are as follows.

Robert Boyle came to the conclusion that the pressure of a fixed amount (i.e., number of moles n) of gas varies inversely with its volume at constant temperature based on his experiments. Boyle's law is the name for this. It can be written as -

P1/V1=P2/V2 at the constant temperature. 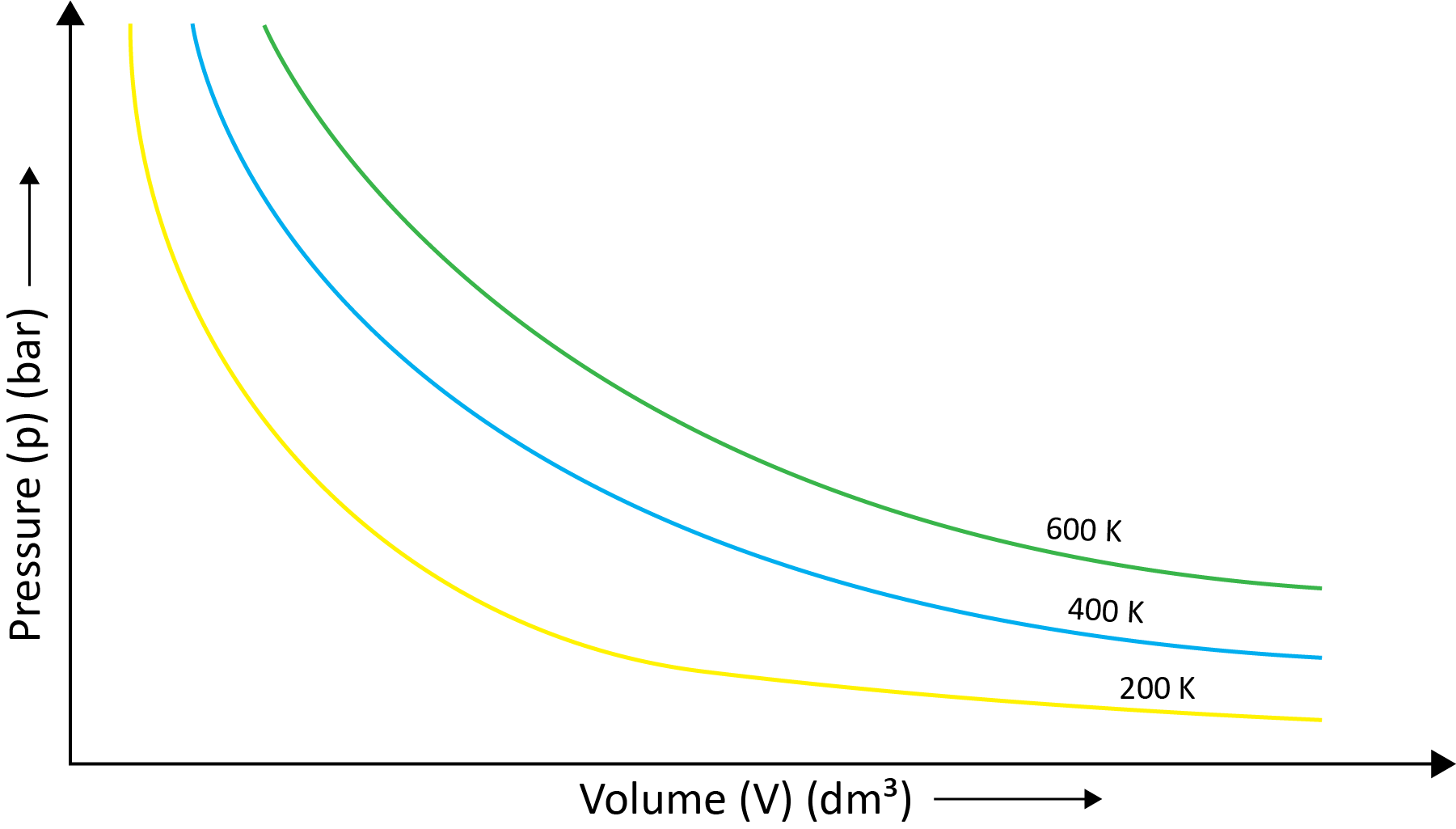 Charles and Gay Lussac individually conducted various gas experiments in order to advance hot air balloon technology. Their research revealed that the volume of a gas increases with increasing temperature and decreases with cooling for a fixed mass of a gas at constant pressure. The mathematical expression can be given as at the constant volume and pressure- 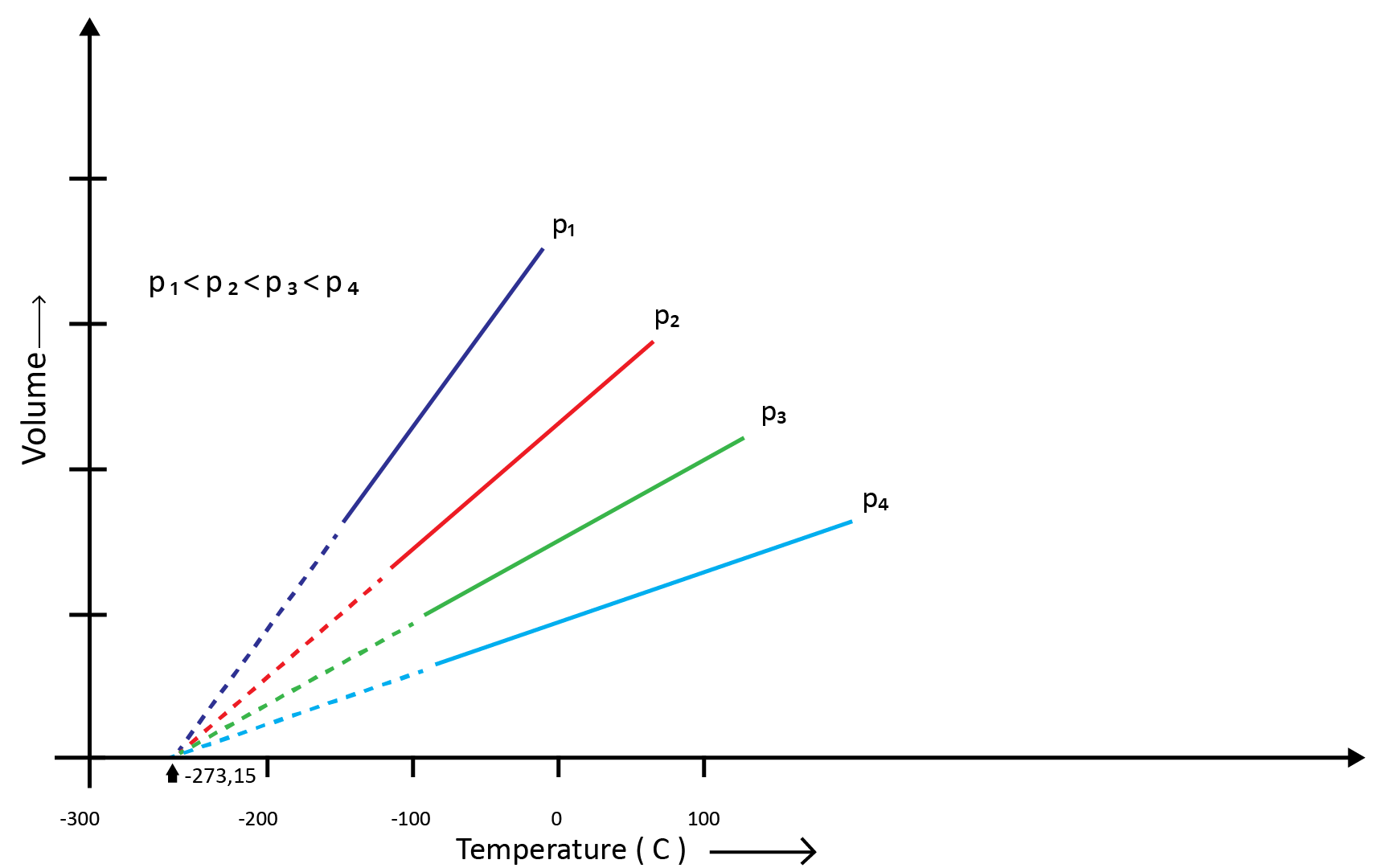 Joseph Gay Lussac established the mathematical link between pressure and temperature, which is known as Gay Lussac's law. It claims that the pressure of a fixed amount of gas varies directly with the temperature at constant volume. Mathematically, 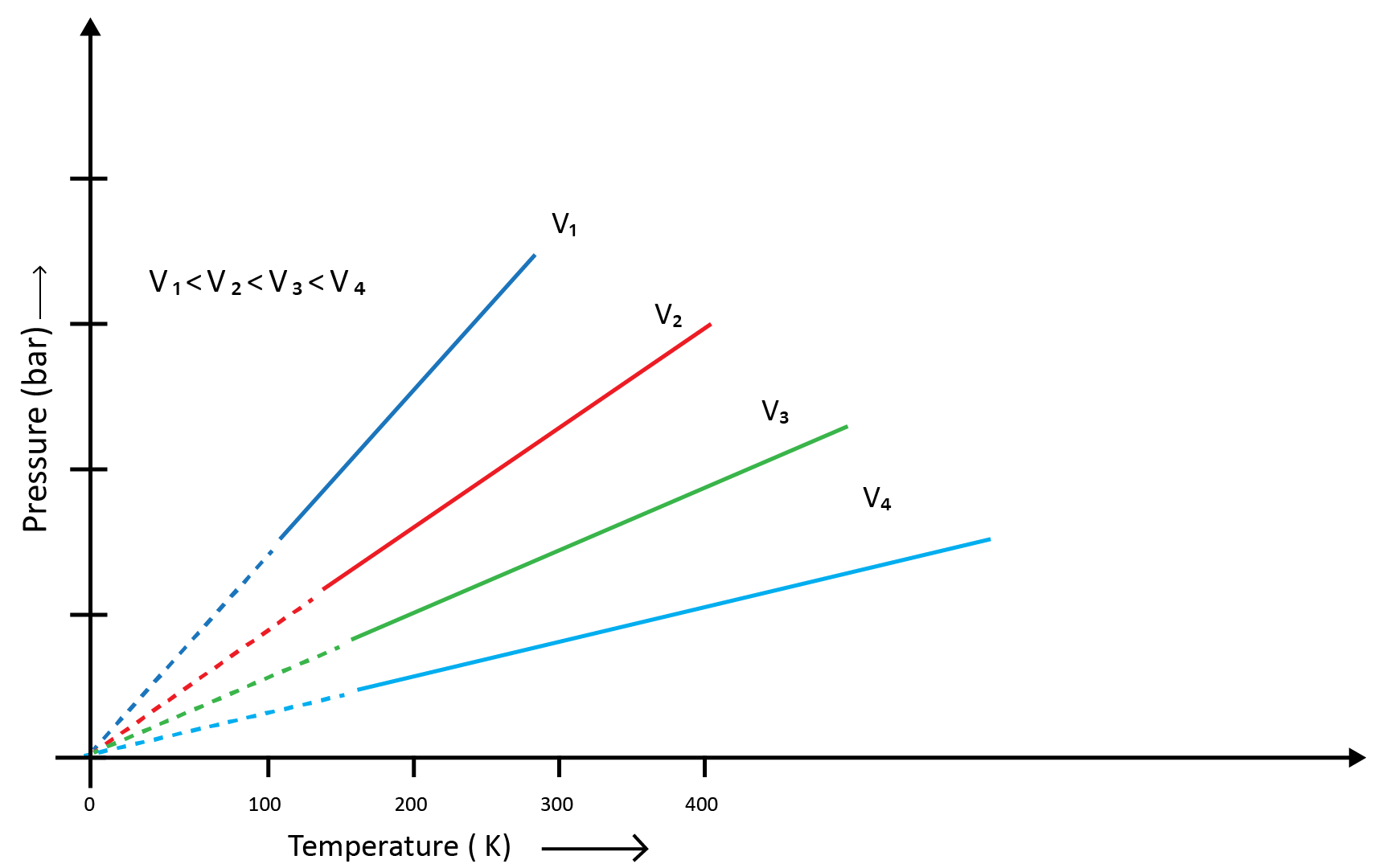 Boyle's and Charles' laws can be used to draw this relationship. The above  graph of pressure vs. temperature (Kelvin) at constant molar volume. Isochore refers to each line in the above graph.

The three laws ( Boyle's law, Charles law, Avogadro's law) that we've learned so far can be merged into a single equation known as the ideal gas equation-

R is called gas constant. It is the same for all gases. Hence,  it is also called Universal Gas Constant.

(a) Density and Molar Mass of a Gaseous Substance

The relation is written below-

where d is the density.

(b) Dalton’s Law of Partial Pressures

John Dalton drafted the legislation in 1801. It asserts that the overall pressure exerted by a mixture of non-reactive gases is equal to the sum of individual gas partial pressure. 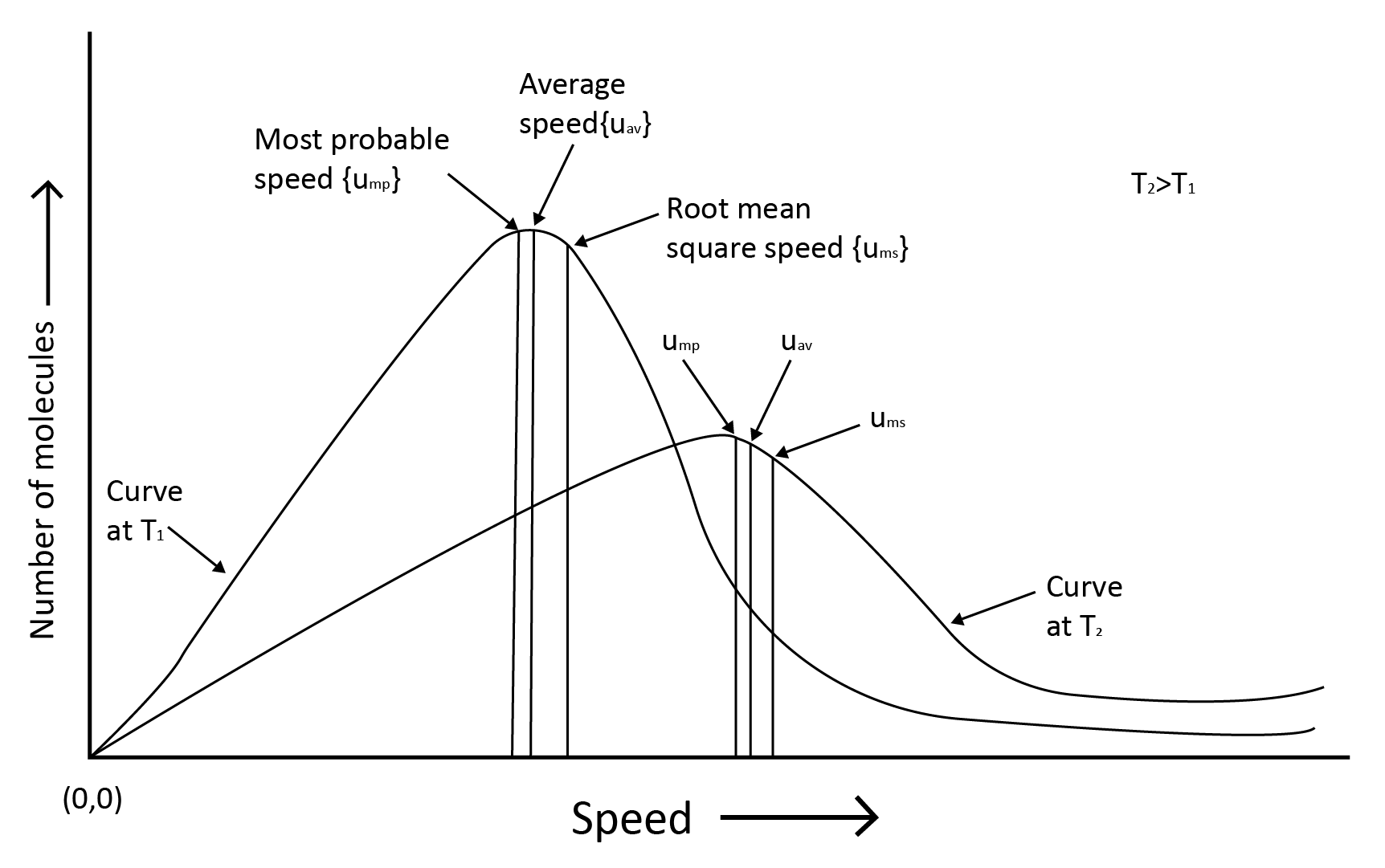 The postulates are given below-

1. Gases include a huge number of microscopic particles.

2. A gas exerts pressure on an object.

3. There is no kinetic energy loss.

4. Gas molecules are attracted to one another.

5. The molecule's kinetic energy is proportional to its absolute temperature.

8. Gravity has a greater impact on the movement of gaseous molecules. 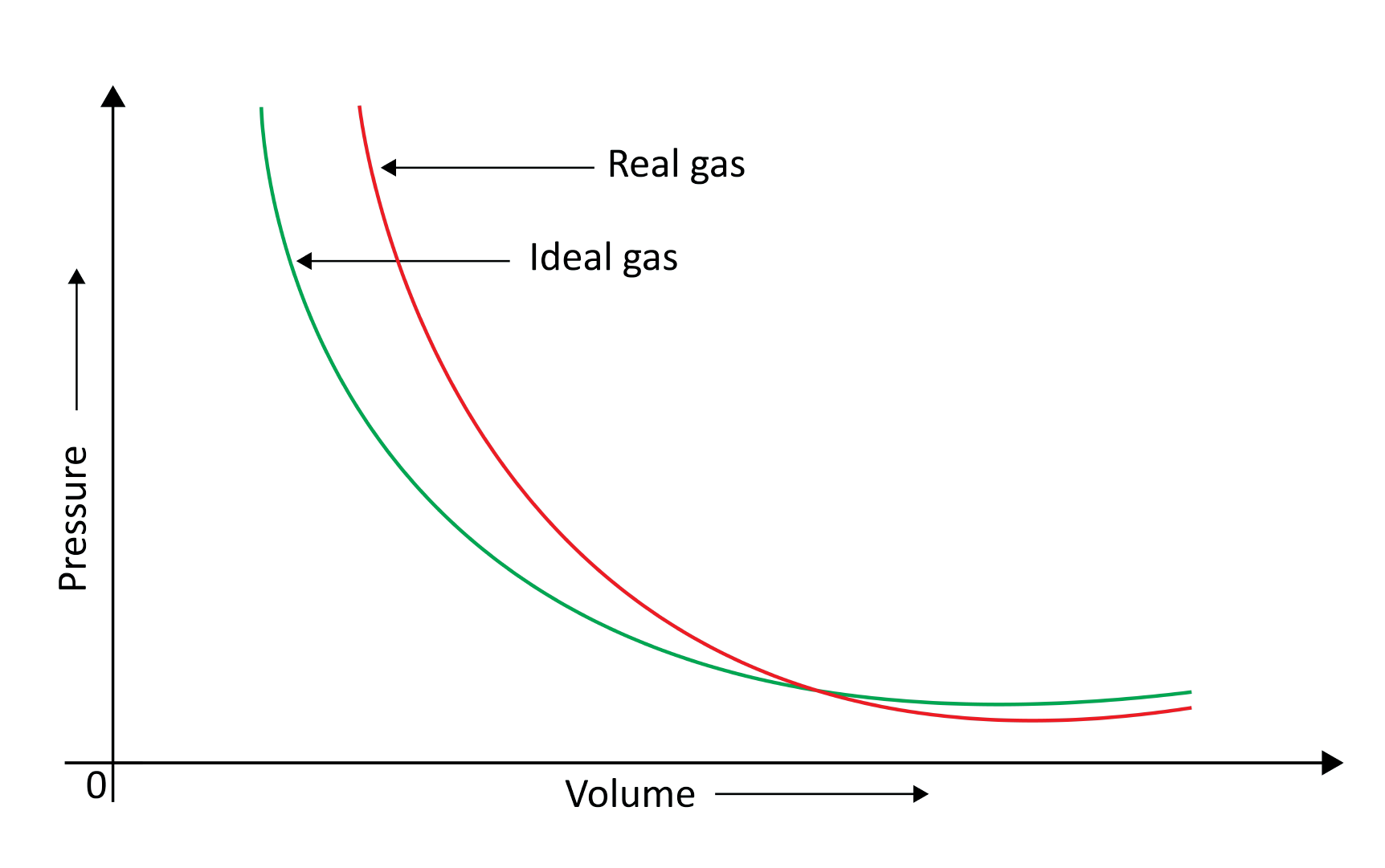 Because molecules interact with one another, real gases deviate from the ideal gas law.

At high pressures, gas molecules are extremely near to one another. Molecular interactions begin to take place. Molecules do not strike the container walls with full power at high pressure because they are pulled back by other molecules due to molecular attraction forces.

Z =pV/nRT is a mathematical formula.

Because pV = nRT, Z = 1 for an ideal gas at all temperatures and pressures. The value of Z deviates from unity for gases that deviate from ideality. All of the gases presented have Z =1 and behave like ideal gases at very low pressures. At high pressure, all gases have a Z>1. Compressing these is more challenging. Most gases have Z<1 at moderate pressures. In the liquid state, intermolecular forces are stronger than in the gaseous state. Liquid molecules are so close together that there is very little empty space between them, thus liquids are denser than gases under typical conditions. Liquid molecules are held together by intermolecular forces that are attractive. Because molecules do not split from one another, liquids have a defined volume. 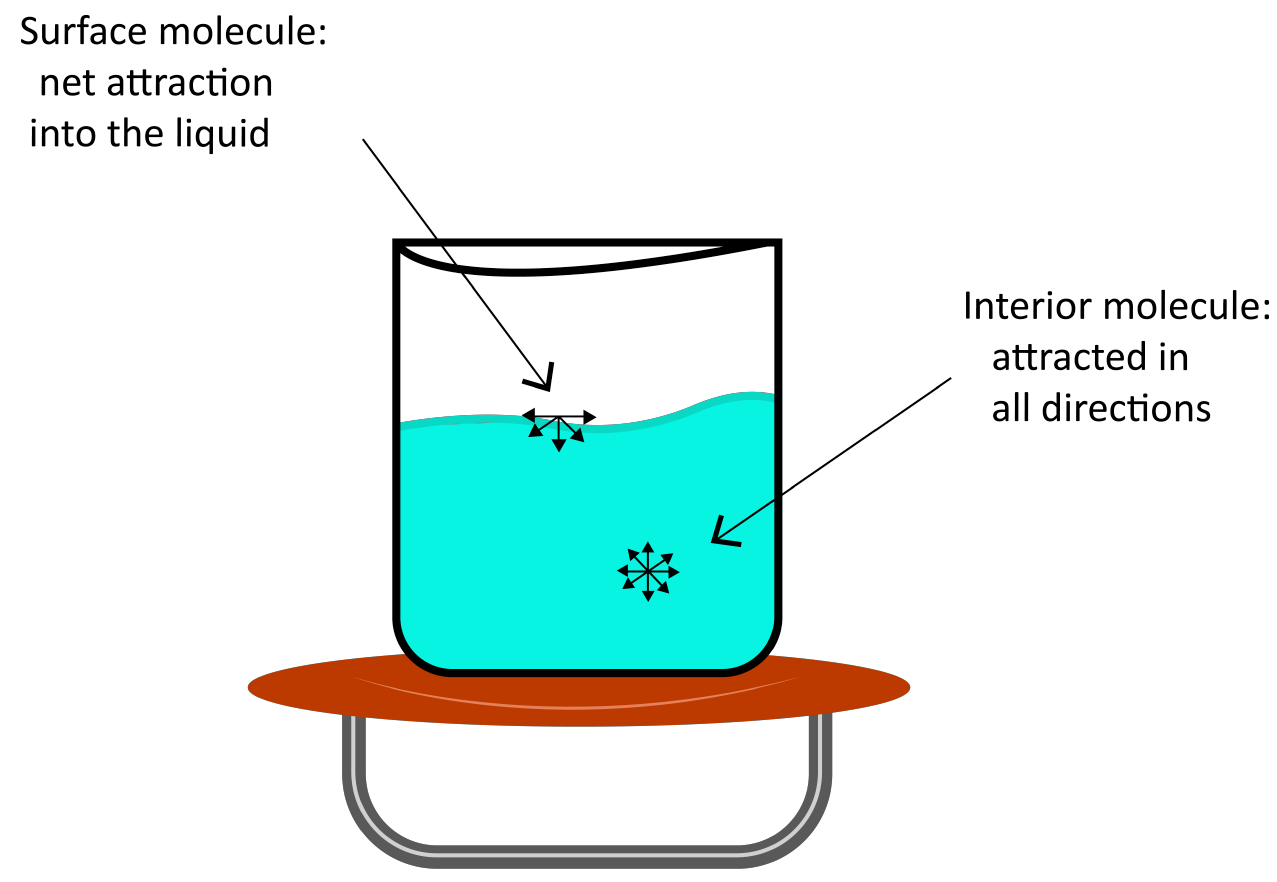 Example 1: Calculate the compressibility factor for CO2, if one mole of it occupies 0.4 litre at 300K and 40 atm. Comment on the result.

As, the Z value is lesser than 1 and thus, nRT > PV. In order to have Z = 1, volume of CO2 must have been more at the same P and T or CO2 is more compressible than ideal gas.

Key point to remember:The compressibility factor Z, which is the ratio of product  of pV and nRT, can be used to calculate the departure from ideal behaviour.

Key point to remember: Ideal gas equation that is pV=nRT.

Question 1: Which intermolecular force is most responsible for allowing xenon gas to liquefy?

Solution: For the liquefaction of xenon, instantaneous dipole induced dipole forces are responsible.

Therefore, option (1) is the answer.

Trick: As Xenon is an inert gas, we can do its liquefaction and for the liquefaction instantaneous dipole induced dipole forces are responsible.

Solution: One of the postulates of the kinetic theory of gases is average kinetic energy proportional to T. This theory proves all the above-given laws.

Therefore,  option (4) is the answer.

Trick: Postulates of the kinetic theory of gases gives a clear idea about the gas molecules and proves all the gas laws.

Question 3:  According to the kinetic theory of gases, in an ideal gas, between two successive collisions a gas molecule travels

(3) In a straight-line path

(4) with an accelerated velocity

Solution: According to the kinetic theory of gases, in an ideal gas, between two successive collisions a gas molecule travels in a straight-line path.

Therefore,  option (3) is the answer

Trick: Postulates of the kinetic theory of gases give a clear idea about the gas molecules and also about their nature.

1. The temperature at which oxygen molecules have the same root mean square  speed as helium atoms have at 300 K is :

Question 2: A pressure cooker reduces cooking time for food as-

(1) Heat is more evenly distributed in the cooking space.

(2) Boiling point of water involved in cooking is increased

(3) The higher pressure inside the cooker crushes the food.

(4) Cooking involves chemical changes helped by a rise in temperature.

Answer: (2) Boiling point of water involved in cooking is increased.

Intermolecular forces exist between matter particles. Pure electrostatic forces exist between two oppositely charged ions, but these forces are different. These forces do not include the covalent bonds that hold atoms in a covalent molecule together. The state of matter is determined by the competition between thermal energy and intermolecular interactions. The energy of constituent particles and the sort of interaction between them determine "bulk" qualities of matter such as gas behaviour, solids and liquids characteristics, and state change. The chemical qualities of a substance do not change as a result of its physical state, but reactivity does.

1. What are the three states of matter that most people are familiar with?

The three states of matter have one thing in common: they are all made up of tiny, little particles. They have a defined mass and can occupy a certain amount of space. In each of these three states, there is a volume. The degree of attraction between atoms is strongest in these three states.

2. Is it possible to generate matter?

Furthermore, the first law of thermodynamics states that the total amount of energy in a closed system cannot be created or destroyed, but it can be changed from one form to another.

3. Why do distinct states of matter exist?

Intermolecular forces, the temperature of its surroundings and itself, and the density of the substance are all factors in the existence of distinct states of matter. The diagram below depicts how the shift between each state takes place (called Phase transitions).