What do you mean by Socio-Economics?

What is Socioeconomic Meaning?

The social science and area of economics that examines the connections between economic activity and social conduct is known as socioeconomics, sometimes known as socioeconomics. Social economics studies the economic and social issues such as: how values, attitudes, and other factors such as social standards and ethics have an impact on the economy. It helps in studying and examining the characteristics of social structure.

By using data from disciplines like history, philosophy, sociology, and political science, social economics tries to explain how social variables affect economic activity in society. It makes use of data from various sources to investigate how consumer behaviour, purchasing trends, and other business and economic operations are impacted.

Social economic theories deviate from conventional wisdom in that they take into account aspects of economics such as how the environment affects wealth and societal consumption patterns.

A social group is any two or more individuals who interact with one another, have common traits, and have a feeling of oneness as a whole. Social groupings come in a wide range of shapes and sizes, though. A society, for instance, can be thought of as a sizable social group. The following are the characteristics of the social groups: 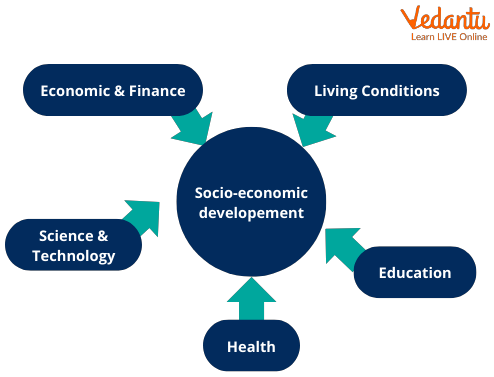 The process of social and economic development in a society is known as socio-economic development. Indicators used to gauge socioeconomic progress include GDP, life expectancy, literacy rates, and employment rates. Changes in less tangible criteria are also taken into accounts, such as the degree of civil society engagement, personal safety, associational freedom, and safety from physical danger.

Socioeconomic development is inevitable, and as a result, unanticipated issues frequently arise. A large number of youngsters are left behind and are not cared for in intact households with both parents due to increased population and workforce migration. This phenomenon has as its foundation the imbalance and inequality of global development.

The regular social arrangements in society that both results from and influence people's behaviour are known as social structures. Similar to this, it is thought that society is divided into functionally distinct but structurally similar groups or sets of roles. Family, religion, the legal system, the economy, and class are some examples of social structures. The characteristics of social structure are as follows:

Additionally, each tribe has its own identity. The names and specialities of each caste and tribal group are eliminated during the construction of the social system. Instead, we speak about "caste" and "tribe." These concepts are abstract.

It is focused on how statuses interact: The family or the university is a social structure regardless of the people who are a part of them. As was already indicated, Radcliffe-Brown is absolutely correct when she observes that while Jack and Jill come and go, the structures endure.

The cornerstone for living long and healthy lives is the social and economic options we have, such as top-notch educational institutions, steady employment, and robust social networks. Employment, for instance, generates income that influences decisions about housing, education, child care, food, medical care, and other things.

Social Economics examines how the local, regional, or global economy affects how modern societies advance, remain stationary, or regress. A social group is made up of two or more individuals who interact frequently based on shared expectations and who have the same identity. The process of social and economic development in a society is known as socio-economic development. The regular social arrangements in society that both results from and influence people's behaviour are known as social structures.

FAQs on What do you mean by Socio-Economics?

1. What is social economics?

By expanding the scope of conventional economics to take into account broader societal motivations and incentives, the emerging discipline of social economics investigates how individual behaviour is influenced by group-level factors. It is a study of the interaction or connection between economics and social behaviour. It is a branch of economics that looks at how economic activity influences social behaviour as well as how social trends and patterns influence the economy. The main focus of social economic theories is on how the economy influences societal patterns in terms of advancement or regression.

2. Why is social economics important?

In the struggle against poverty, social economy institutions and organisations are crucial in fostering livelihoods and job development. In light of the problem of worldwide unemployment and underemployment, social economy firms provide an essential source of employment. The social economy is a valuable resource since it aims to find fresh approaches to problems (social, economic, or environmental) and to meet needs that the public or private sectors have failed to appropriately address. Given that value judgments must be made in order to develop policy, it places a strong emphasis on normative values.

3. What are examples of social economics?

Low-income families, for instance, would not be able to afford to pay for their kids' involvement in extracurricular activities like team sports, music lessons, or individual tutoring, which might help them reach their goals of having a wealthy future. Additionally, these kids can go to overcrowded schools with little staffing or funding for instruction.

Higher education completion is more likely to boost an individual's earning potential and give them access to opportunities to interact with those in similar or more affluent social groups and form useful social networks.