Verified
Hint: The first prehistoric man originated between 2 to 1.9 million years ago, followed by Homo erectus, which dates to approximately 1.7 MYA.
They are characterized by their relatively well developed enlarged brain carrying the cranial capacity of approximately 550-650cc.

Complete answer: Homo habilis is considered to be the first man-like species in the course of evolution. They are considered to be a species of archaic humans who evolved from Australopithecus.
They were the immediate ancestors, directly evolving into Homo erectus which in turn directly led to the modern humans (Homo sapiens).
They were given the name Homo habilis, which means 'handyman,' as they were the first human ancestors who probably used tools. It is expected that they were the primary creatures to come up with the idea and skills of tool-making for specific purposes.
They were generally thought to consume high quantities of meat, especially scavenged meat. Early hominids are typically considered to have thick hair and they possessed sexual dimorphism, although relative male and feminine side aren’t definitively known. 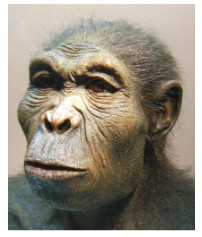 So, the correct answer is option B. Homo-habilis.

Note: Homo habilis is the foremost ancient representative of the human genus, Homo. Homo habilis inhabited certain parts of Sub-Saharan Africa approximately 2.4 to 1.5 million years ago. H. habilis is credited with the manufacturing of the Oldowan stone tool industry.